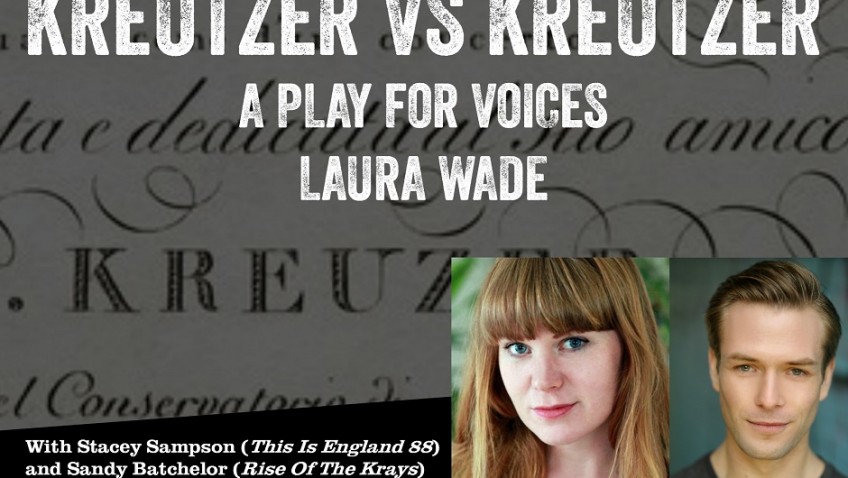 KREUTZER VS KREUTZER – a Play for Voices, with Ensemble 360,

In Kreutzer vs Kreutzer, a fiery, dramatised Tolstoy tale is set around two sonatas, one by Beethoven, one by Janacek. This may not be Tolstoy the Musical, but the story does provide alternative narratives in the movie manner of Sliding Doors. (Well, sort of!)

It all started with the effect that Beethoven’s Kreutzer Sonata (written in the early 1800s for piano and violin and dedicated to violinist Rodolphe Kreutzer) had on Leo Tolstoy when he heard it. Two of its three movements are filled with such powerful, pulsating heat, breathless urgency, wild emotions and passion that they set Tolstoy’s creative cogs a-whirring. Hmm, how far might emotions and passions expressed in music arouse our own emotions and influence even our very actions?

The result was a novella (immediately censored!) full of animal passion, rage, jealousy and violence. It’s the story of a husband who engages a young pianist to play duets with his pianist wife, but their music-making together is so heated and passionate, he suspects there must be more to their relationship than just music. Consumed with jealousy, he resorts ultimately to extreme violence, though whether his suspicions were actually justified is never revealed in the story. In turn, the full-on passion in Tolstoy’s tale inspired Janacek to write his own Kreutzer Sonata in1923.

In more recent times came another flash of inspiration: why not combine this fictional love triangle with the trio of classical works that connect it? Now Laura Wade’s play for voices adds a new dimension. Delivering dialogue and attitudes with a more contemporary feel, two costumed actors (Stacey Sampson and Sandy Batchelor) speak as the wife and young man, characters with no voice at all in Tolstoy’s first person, husband’s view, novella.

Their faces are expressive and they maintain eye-contact but the actors don’t physically interact. The dialogue is delivered more radio-style as (in storyline one) the two circle the piano, slowly pursuing one another, or (in version two) simply keep their distance. Commissioned by the Australian Chamber Orchestra, the piece premiered in 2010, touring Australia, Sydney Opera House included.

At the Crucible, the chamber players of Ensemble 360, as ever, came up trumps, bowling the audience over with their own massively engaging, passionate, virtuoso performances, as the actors sit on chairs, like sparring partners, diagonally opposite one another, awaiting their turn to speak at the end of each movement of each sonata.

The resulting, exciting, innovative creation certainly engendered delight and appreciation in the audience, even though the attempt to gel such disparate elements isn’t entirely successful. It’s true Beethoven’s Kreutzer Sonata did inspire Tolstoy’s tale but, other than being filled with hot energy and galloping, racing pulses, it really has nothing to do with the story. Indeed, having applause and dialogue break in after each movement may prove frustrating to some rather than enhancing.

On the other hand, Janacek’s shorter, jerkier, more succinct movements reflect moments of sweetness and torment from the actual tale, and here the drama does fall more subtly into place as the repeated dialogue branches into its alternative story. Into the bargain, it’s with sublime togetherness, fevered intensity and tender blendings, with horror movie suspense and tortured, screeching passion that Ensemble 360’s string quartet of Ben Nabarro, Gemma Rosefield, Claudia Ajmone-Marsane and Ruth Gibson perform the Janacek.

Tolstoy said that ‘in the wrong hands music can be a fearful thing’. Ah, but in the right ones, of course, it’s a heavenly one! It looks like Music in the Round is starting its Sheffield Beethoven Festival as ‘bigly’ (as Donald Trump might say) as it means to go on.

The Australian Chamber Orchestra commissioned the piece featured on “KREUTZER VS KREUTZER – a Play for Voices, with Ensemble 360.