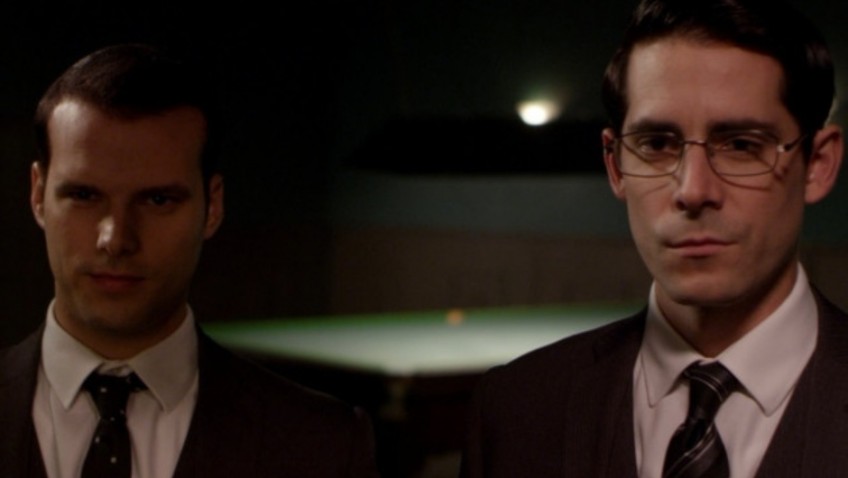 THE RISE OF THE KRAYS (Signature). Britain’s most notorious gangsters organised crime in London’s East End in the 1950s. They moved into the West End in the 1960s. The portrait is sickeningly brutal. The twins brook no rival gangs and move in pronto to eliminate them. Ronnie goes berserk and is certified insane. Zachary Adler directs his low budget film without any box office names. Kevin Leslie is Ronnie. Simon Cotton is Reggie, seemingly the nicer of the two; nicer in comparison, but lethal. A second film is about to open. It will be interesting to see how the Tom Hardy version compares. Hardy plays both twins. There is also a documentary about to be released.

MEDIUM COOL (Eureka). The whole world is watching. You may wonder if you are watching a documentary or a narrative. The demarcation is so blurred that initially it is difficult to tell. A television cameraman (Robert Forster) falls in love with a Vietnam War-widow (Verna Bloom) who has a 12-year-old boy. That’s fiction. The setting is Chicago and the 1968 Democrat National Convention and the riots. That is totally for real, filmed as it was all happening. Director/Writer Haskell Wexler begins with a discussion on the ethics of detached TV reportage without involvement and evaluation and then goes on to make a powerful statement on society, blacks, politics, education and media.

ROBBERY (StudioCanal) is a fictional account of the Great Train Robbery in 1963 when £2.6 million was stolen from the Royal Mail train on its journey from Glasgow to London. Stanley Baker (who also produced this 1967 film version) casts himself as the leader of the gang but is so subdued he makes far less impact than do William Marlowe as his partner in crime and James Booth as the detective trailing them. The high spot is the opening sequence with an exciting car chase through the streets of London. The director was Peter Yates and as a result he was invited to direct Steve McQueen in Bullitt in 1968 and one of the screen’s most famous car chases.

THE NIGHT HAS EYES (StudioCanal). A schoolteacher (Joyce Howard) goes in search of a friend who died in the murky Yorkshire moors and takes refuge in a creepy house which is owned by a composer (James Mason), who was traumatised during the Spanish Civil War and is liable to kill when there is a full moon. He should, on his own admission, be locked up; the silly girl thinks she can cure him. It’s all a lot of baloney but the young James Mason, Mary Clare and Wilfrid Lawson, directed by George Arliss in 1942, know how to turn baloney into Grand Guignol

PRESSURE (Entertainment One). Four saturation divers are stuck in a damaged diving bell on the murky seabed of the Somali Basin 650 feet down. Their ship has sunk in a storm. How are they going to survive? The characters and the script are never sufficiently interesting for you to care one way or the other and Ron Scalpello directing has great difficulty filling in the time and keeping up the pressure. The film fatally lacks oxygen. One of the actors gets to have a dream sequence in which he is swimming with a naked woman. Don’t hold your breath.

THE SCOTLAND YARD MYSTERY (StudioCanal) is about murder and insurance fraud. Two well-known stage actors in the first three decades of the 20th century appear in this absurd 1933 British thriller which was based on a play, the sort of rubbish theatregoers enjoyed in the 1920s and 1930s. The murderer (George Curzon) actually poisons a man in front of the police commissioner (Gerald du Maurier) and he is still not arrested. The only authentic things are the clothes of the period. Fascinating though it may be to see what women and men were wearing 80 years ago; it’s not a good enough reason to be wasting your time watching the movie.

You can buy any of these DVDs at discounted prices here: