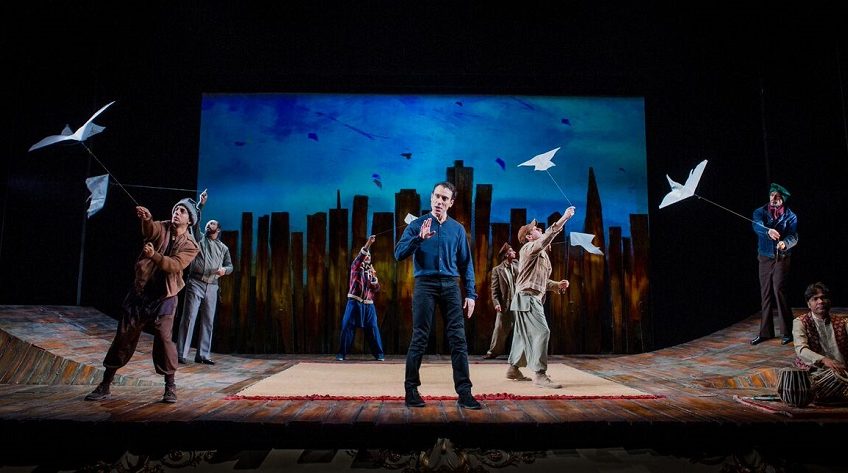 The Kite Runner, first a novel, then a film, now a play

Khalid Hosseini’s best-selling novel, a very moving story of loyalty, betrayal and redemption, published in 2003 and filmed in 2007, is now a play, adapted by Matthew Spangler and directed by Giles Croft. The Kite Runner was on the New York Times best seller list for over two years with over 7 million copies sold in the US alone.

The present stage production, a joint effort by Nottingham Playhouse and Liverpool Everyman and Playhouse, has been touring off and on since 2013 and is now in London for a short run.

Hosseini’s story is about the friendship of two young boys: Amir, a rich boy, and Hassan, his father’s servant’s son. The action is set In Afghanistan and the USA and covers a period from the 1970’s up to the rise of the Taliban.

The major turning point in their relationship comes when Amir watches Hassan being raped and does nothing to help him. He runs away and carries his shame and guilt for the rest of his life.

The adaptation relies heavily on Amir as narrator; and the narration, addressed directly to the audience, is handled with great skill by Ben Turner.

Turner is ably supported by Andrei Costin as the ever faithful, ever self-sacrificing Hassan, and by Emilio Doorgasingh as Amir’s father whose relationship with Amir and Hassan is a key factor in the story

Matthew Spangler is a professor at San Jose State University in California where he teaches courses in playwriting and immigration studies. His adaptation feels like a very worthy but not wholly successful university exercise.

I came out of the theatre, feeling if you have either read the novel or seen the film, or done both, you don’t really need to see the stage adaptation.

But the staging will no doubt continue to prove useful for schools, who are studying The Kite Runner for examinations.