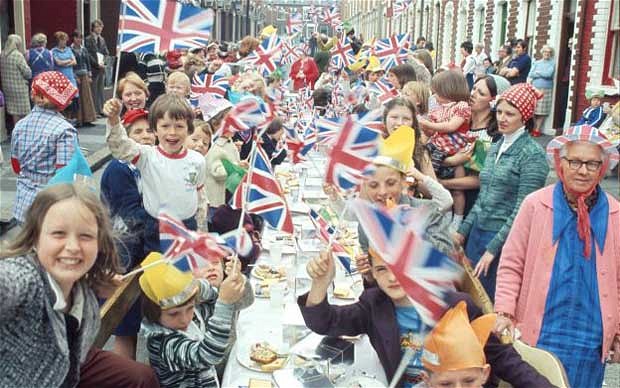 We often look back when the New Year dawns and for me this year was no exception. It’s forty years since I went off to college and it got me thinking back to events that made up 1977. The most significant event was probably the Queen’s Silver Jubilee. The nation’s streets were hung with red white and blue bunting in preparation for the almost compulsory street parties. The Queen visited many UK towns and cities, attracting large crowds of well-wishers. TV coverage of the major celebrations was beamed live around the Commonwealth and even Coronation Street got in on the act to broadcast its own street party. Were you were dancing the night away to ABBA or pogoing to The Sex Pistols? May be a quiet night in front of the telly was more your thing, settling down to watch Des O’Connor Tonight, Within Theses Walls, or The Professionals on your Redifussion set. A black and white TV Licence cost £8, a colour one set us back £18 and our average weekly wage was just short of £70.

Mary Whitehouse was campaigning to save our morals and with only three TV channels to choose from, watching the television was a family event. Top Gear, Take Hart and the Krypton Factor all made their TV debuts and the final episodes of Porridge, Dad’s Army and The Duchess of Duke Street were screened. Saturday Night Fever and Punk Rock influenced our fashions and hairstyles with most of us have the photographs to prove it! With Changing Rooms a good nine years away we made bad home décor decisions all on our own. Do orange and brown patterned wallpaper and stone cladding ring any bells?

The GPO provided our telephones and many of us had a party line. Most didn’t have a phone at home so trips to the nearest telephone box were required, making sure you had plenty of coins to avoid the dreaded PIPs! Communications were much simpler and some would say all the better for it.

Kenny Dalglish became the UKs most expensive footballer when he transferred from Celtic to Liverpool for £440,000, Scotland beat England at Wembley, and Red Rum romped home to his third Grand National win. The ever-charismatic F1 driver James Hunt won his only British Grand Prix and Geoff Boycott scored the 100th century of his career for England against Australia at Headingly. But for many the icing on the sporting cake of 1977 was Virginia Wade winning the Wimbledon Ladies title. Fleetwood Mac released their iconic LP Rumours, Stevie Wonder released Looking Back and Queen released the single We Are the Champions. Lyndsey de Paul & Mike Moran sang our Eurovision Song Contest entry, Rock Bottom coming ninth, so not quite rock bottom. The LP charts were quite eclectic with Slim Whitman, The Shadows, Frank Sinatra and Connie Francis all having number 1 selling albums along side ABBA, Queen, and Sex Pistols. popular books of the year included Ellis Peters’ first novel in the Brother Cadfeal series, A Morbid Taste for Bones, The Thorn Birds by Colleen McCulloch, the Country Diary of an Edwardian Woman by Edith Holden. Paul Scott won the Booker Prize for Staying On.

Who would have thought that two films released this year would spawn two lucrative franchises? In February, the Hollywood glitterati awarded the OSCAR for best film to Rocky making the actor Sylvester Stallone a star. December saw the release in Britain of Star Wars, another blockbuster that was the start of a multi-million-dollar franchise and a cultural phenomenon that is probably more popular today than it was 40 years ago. Much has changed since 1977 and we live in a very different world today but as the American poet Henry Wadsworth Longfellow said; ‘Look not mournfully into the past, it comes not back again. Wisely improve the present, it is thine.” Happy New Year.