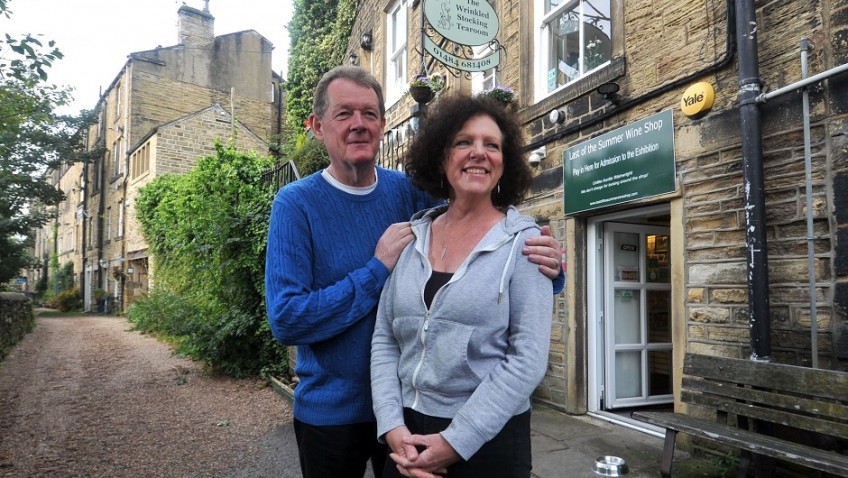 Comedy fans could be set to get their hands on a piece of sitcom history with an iconic part of the Last of the Summer Wine set up for sale.

The on-screen home to the slapstick show’s legendary bumbling old fool Compo had grown into a permanent exhibition for fans of the comedy to visit.

But after 13 years of running the museum, the owners are planning to sell up to let “new blood” take over the reins.

Despite the site having one of its busiest Augusts trading ever, the owners fear it will truly be the end of the summer wine if a buyer isn’t found. Sue Gardner, 55, who runs the attraction with husband Chris, said they weren’t fans of the show but spotted an opportunity when the former owners decided to move on.

Sue said: “There are thousands of people who are absolutely fanatical about the show.

“And it’s in all age groups. We have little children who come in and they like a character because they’ve sat and watched it with grandad or whatever.”

Sue said visitors from across the globe descend on the attraction in Holmfirth, West Yorks., including from Australia, New Zealand and even Finland.

She said: “It’s very popular in Finland for some reason. They come straight here from Manchester Airport.”

As well as the exhibition and gift shop on site, the attraction sells memorabilia all over the world, with fridge magnets being its biggest seller. Sue said: “We shipped some teddy bears of Compo to Columbia the other day.”

Visitors to the set walked up the steps to Nora Batty’s home and get to go through Compo Simmonite’s doors and into his front room where the exhibition is homed.

The exhibition features the journey of the world’s longest running sitcom from its beginnings in 1973 up until it closed in 2010.

The museum was initially opened in 1996 by Bill Owen who played Compo.

Sue said the decision to sell up came after losing her mum earlier in the year and her 92-year-old dad becoming more dependant on her.

She said: “We are staying in the area. We love where we live.

“It’s more to do something different and free our time up. Our busy time is when it’s holiday time for other people. We used to be open 364 days a year. Now we don’t, we shut for three months in the year. Somebody’s who has got new ideas could extend the business and expand it even further.

“We’ll be sad to give it up, but the time has come for us to retire and it would be such a shame if the exhibition closed. Holmfirth relies, to an extent, on tourism as we know how many people still love to come and visit us. It’s a true golden classic.”

Anyone interested taking on the museum can email chrisgardner4@icloud.com