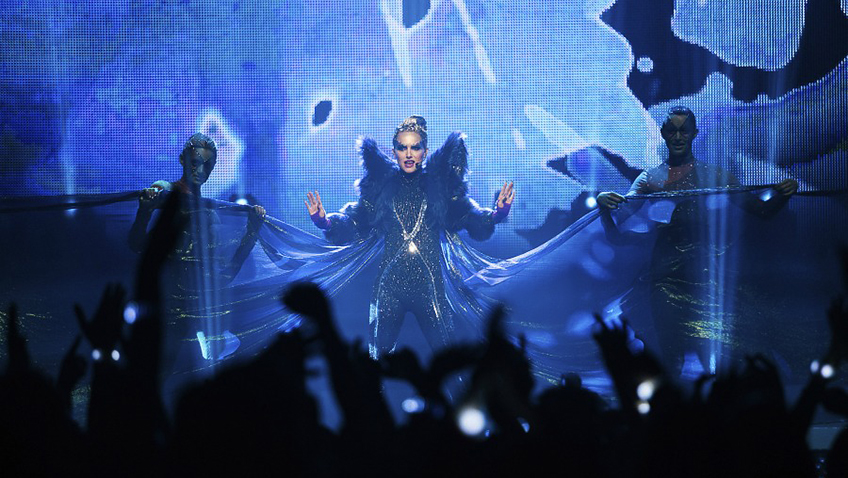 In his second feature, Vox Lux

, actor-turned-director and co-writer (with Mona Fastvold) director Brady Corbet builds on his powerful, if flawed, debut feature The Childhood of a Leader with another dynamite score by Scott Walker and versatile, atmospheric cinematography from Lol Crawley. Corbet once again creates an archetypal character and makes her, as he points out in a director’s statement, an eyewitness to ‘historical turning points’…or places characters ‘in altered historical settings.’ That one of these events is 9/11 and another, the 2015 Sousse beach attacks, is a measure of Corbet’s ambition in exploring how nature, nurture and current events collide to contribute to the formation of a monster. If his ambition gets the better of the ideas that sustain it, Corbet is a welcome new voice.

In this case, the first crucial turning point is not the Versailles Peace Conference and distant, unhappy parents as in The Childhood of a Leader, but a 1999 Columbine-type school massacre in which, conservative, religious, and family-orientated Celeste (Raffey Cassidy) survives, with serious spinal injuries. The massacre scene is particularly chilling as it begins with students interacting with an attractive, wonderfully, warm, young teacher whose sudden, shocking death will be the first casualty. When the killer, a student in Celeste’s class, reaches Celeste, he stops as though to acknowledge her presence.

Celeste recuperates in hospital where she writes a song with her musically talented older sisters, Eleanor (Stacy Martin), who seems to live in Celeste’s shadows. The song, which Celeste sings at a school memorial service goes viral and Celeste is turned into a teenage star with a manager (Jude Law) and publicist (Jennifer Ehle) who are frequently at loggerheads.

For a long time stardom does not seem to affect Celeste. But gradually, the innocent girl who reprimands her manager for swearing and, though still suffering from spinal injuries, stoically learns her demanding dance routine, is corrupted by life on the road. There is a tedious bedroom scene with a musician she picks up as part of her sentimental education, suggesting an early penchant for one night stands, as we have no evidence that he was anything more. 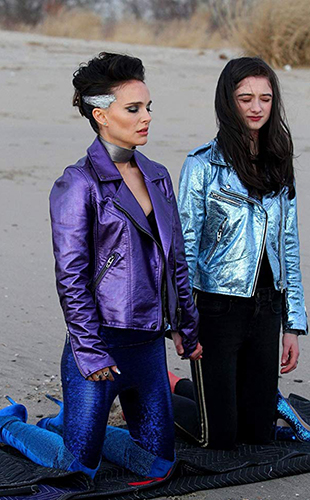 Cut to 2017 and Celeste has been transformed beyond recognition. A heavily made-up Natalie Portman in a shiny, flashy, tight-fitting superstar outfit takes the baton to stage a comeback after her career was compromised by tragedy. Adult Celeste is a foul-mouthed harpy on a diet of drugs, alcohol, sleepless nights and adrenaline, and, somewhere fairly early on (that bedroom scene must have been there for a purpose) produces a daughter, Albertine. The care of Albertine, already a teenager taller than mum in 2017, has been farmed out to Eleanor, and both Eleanor and Albertine are on the road serving Celeste.

That Raffey Cassidy also plays Albertine is a clever casting move as it helps us to anticipate the vulnerable young, and impressionable girl’s fate. In one painful scene Celeste suddenly decides to spend some quality time with her daughter and since Albertine is hungry, they go off to a restaurant. The meal turns into a kind of Mad Hatter’s Tea Party as no one gets anything to eat. Celeste is on a liquid diet and arranges with the restaurant manager to slip her a bit of wine in a take away coffee cup. But she soon turns belligerent, attacking the manager who kicks her out. During this outing we notice how caring, sweet and down to earth Albertine is, but the writing is already on the wall, and Albertine – who is about her mother’s age when she gave birth – is pregnant.

The issue preoccupying Celeste’s publicist is how Celeste will handle questions about her connection with a massacre on a beach resort in Croatia in which the terrorists wore glittery masks identical to those in a Celeste video. But instead of resting, Celeste has a drug party with her manager just prior to the press conference, and her interview digs her into a deeper hole.

It is from this scene through to the end of the film that the idea emerges of a star born out of tragedy and violence, one who, quite literally owes her fortune and fame to one massacre and her notoriety to another.

It might bother some viewers that the rather unbelievable transformation from younger Celeste to 2017 Celeste is never explained. It is not just a matter of losing innocence; we all do that; but in Portman’s Celeste there is no trace of Cassidy’s Celeste. It is as though Celeste made a pact with the devil. 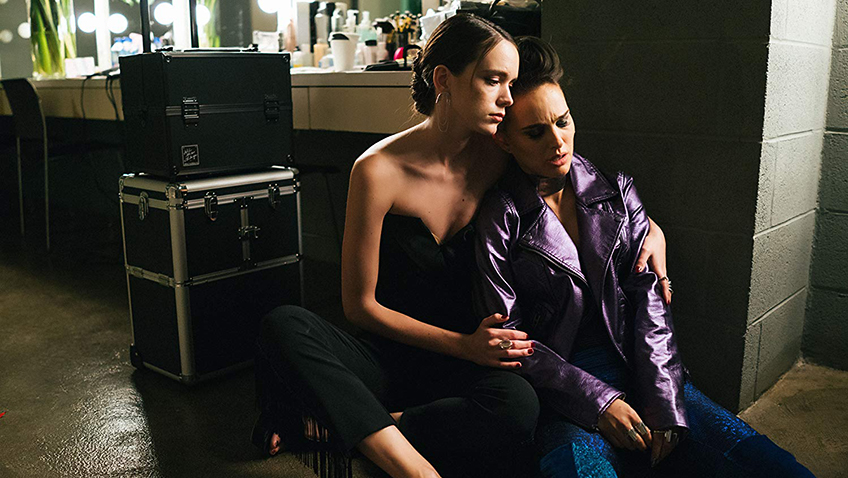 Portman’s appearance in the second half of the film is nonetheless a tour de force. Her performance is so energetic and intense that, while bordering on being over-the-top, it transcends the clichés about a debauched pop star on the road and enables us to experience them anew. Portman is not only the star of this film (although Cassidy is terrific), but the Executive Producer and she gives herself a juicy role that she exploits for all its worth.

It’s just a shame that Portman, wearing her Executive Producer cap, did not have a talk with Corbet about an annoyingly verbose narrator popping up, while saying nothing that adds to the story. That the narrator is Willem Dafoe, with his irresistible voice, does not really excuse this error of judgement. We do not really need the numbered chapters either. Ehle and Law – representing Celeste’s entourage – are fine actors but are given little to do. Their characters have managed to last many years with a difficult, capricious client, but they are not fleshed out as real people or used to shed light on the drama, or on the nature of celebrity.

Whether it is intentional or a flaw, you might be left wondering whether Celeste’s big come-back, with songs by co-executive producer Sia, and choreography by Benjamin Millepied, Portman’s real-life husband, is a success or a catastrophe. What is equally shaky, but far more interesting, is Corbet’s exploration of how pop stars, like violence, are turned into commodities by an insatiable media and brainwashed cult followers.