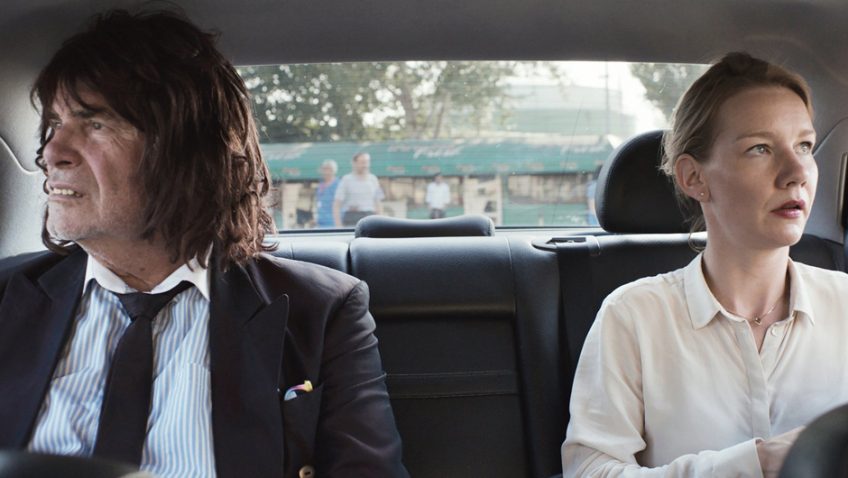 Not many people were fortunate enough to see German writer/director Maren Ade’s debut feature, a slow-burning, creepy psychological thriller, Forest for the Trees, or, for that matter, her 2009 feature, Everyone Else, an unsettling romantic comedy/drama that reveals as much about ourselves as it does about the professional couple on holiday in Sardinia. Ade’s third feature, Tony Erdmann, a weird and wonderfully original father-daughter relationship comedy, cannot be so easily overlooked. Combining universal feelings, foibles and situations with a distinctly Germanic manner, Tony Erdmann echoes the great father-daughter struggle and bonding in Wagner’s Die Walküre, transposing it with humour, but retaining, in the film’s three-hour running time, its epic feel. Winfried (69-year-old Austrian actor Peter Simonichek) is a music teacher and prankster whose juvenile sense of humour is, in the film, often hilariously funny, but proves annoying to his friends and family. He greets a delivery man in a shaggy wig, big buck teeth and white face paint. Is this his way of dealing with the cruelty of a life that has separated him from his wife by divorce, his beloved dog by old age and death, a colleague by retirement and his estranged, thirty-something daughter, Ines (Sandra Huller) by her desire to climb the corporate ladder in a man’s world?

When Ines returns for her birthday from Bucharest, where is working, he senses a distance that disturbs him. Like George Clooney’s character in the comedy Up in the Air, Ines is a lonely management consultant specialising in lay-offs, specifically, in the oil industry. The stress of a job that requires her to advise companies that have a public image, but a responsibility to shareholders to cut jobs, is apparent; being a consultant, rather than an employee, adds another layer of anxiety. Dressed in dark business suits and high heels, all sleek and professional, you can sense through Huller’s remarkable performance a tension and insecurity that comes from Ines’ struggle to fit in and play the game at any cost.

Like all fathers, Winfried wants his daughter to succeed in life and be independent, but he senses she is doing so on someone else’s terms. Ines does not give off the sense of ease and well-being that comes from doing a challenging, but fulfilling job. One thing is certain: Ines no longer finds her dad’s funny faces amusing.

Winfred has a unique, if misjudged, solution to helping a daughter who refuses to recognise she has a problem, let alone that she needs help solving it. He follows her to Bucharest, first as her father, and then as a character named Toni Erdmann, complete with a wig, false teeth and a variety of aliases, including the Ambassador for Germany.

As Winfried, but even more so as Toni Erdmann, Ines finds her father’s intrusion into her life humiliating, embarrassing and detrimental to her job. He observes her being used by her boss (she is asked to go shopping with a client’s wife) and struggling out of her comfort zone to say the right thing and impress him and the clients. She is clearly smart and valued in her work, but Erdmann is there to help Ines realise it is okay to laugh, and maybe in the process, to find herself.

The challenge for Simonichek is to transform into Erdmann as a music teacher would pass themselves off for someone else and not as a professional actor would. He pulls it off, as we can tell from the various reactions of Ines’s colleagues and friends to this weird man. There reaches a point where, to minimise the damage, Ines has to go along with Winfried/Erdmann, as the more she resists, the more he will embarrass her. Gradually, we sense her resistance wearing down and something inside of Ines changes. There is a remarkable scene in which Erdmann drags Ines to the home of an attractive Romanian woman Erdmann meets at a party. Ines wants to leave, but Erdmann proposes that they sing something for the guests before they do. Furious, but resigned, Ines stands up and belts out Whitney Houston’s The Greatest Love of All. It’s not an easy song to sing, but it seems to become a kind of surrender, and Winfried is as moved as the audience is stunned, as the words register:

Before leaving, Winfried tells the hostess the truth about who he is and his daughter. ‘It’s complicated,’ he says. ‘Family,’ the woman states, without needing to say more.

This episode is followed by a scene that suggests the DNA in a family works in strange ways, but cannot be ignored. Charged with entertaining her team with a catered dinner, Ines finds her own unorthodox way to break down barriers when the she finds the dress she is wearing too tight, and ends up removing it

In the Forest for the Trees, Ade’s first film, a 27-year-old lonely school teacher on the verge of a breakdown stalks a woman whom she believes is her friend in the town of Karlsruhe, where Maren Ade was born to school teacher parents. When the woman learns she is being stalked, friendship is out of the question. Winfried is also a stalker, and there is a kind of cruelty to his approach at parenting, one that brings to mind the cruelty of Wotan’s painful duty to interfere with his daughter’s free will.

Earlier in the film Winfried asks Ines, ‘are you even human?’ resenting her coldness humourless life. In the touching ending back in Germany, where there is another death – Ines’ grandmother – we learn the answer. As in Die Walküre, father and daughter must part ways, but they do so with a tenderness that transcends career choices, lifestyles and borders.