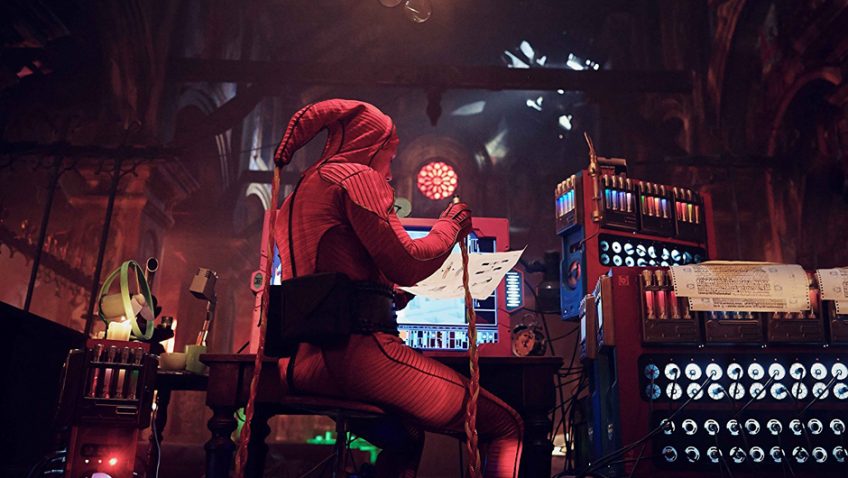 , offers the impressive stylistic traits that few directors bring to bear so unapologetically, and often self-indulgently, in what may be his search for another Brazil – the dystopian satire that launched his career in 1985.

There is plenty to admire in The Zero Theorem

, including the visual splendor that contrasts the anti-hero’s home, a derelict gothic church; with his dreamscape a Hawaiian beach; and his working world – a noisy, garish and permanently wired metropolis.  But the talents of Christoph Waltz (Django Unchained; Inglourious Basterds) are underutilised in an often baffling drama that is half-way between an existentialist pantomime and a tired satire.

The employee of a totalitarian state that was Sam Lowry in Brazil has been transformed into Qohen Leth (Waltz), although his supervisor and only ‘friend,’ Joby (David Thewlis), gets his name wrong all the time.  This disregard for individual names and identities is a theme in the film.  And while Leth still corrects the mistakes with his name, he has become such a clog in a wheel that he refers to himself as ‘we’.

Leth is a clog, but also a valued number cruncher for Management (Matt Damon), a ubiquitous, mysterious spirit whose flashy suit jackets match the furnishings where ever he is.  Although Leth has gone bald, and become unhealthy (his diet appears to be pizza) and paranoid (he has more locks on his door than a wealthy widow in Mexico City) from the relentless pace of work thrown at him, Leth has another problem. He wants to work from home so he can be there for the phone call that will tell him the meaning of his existence. 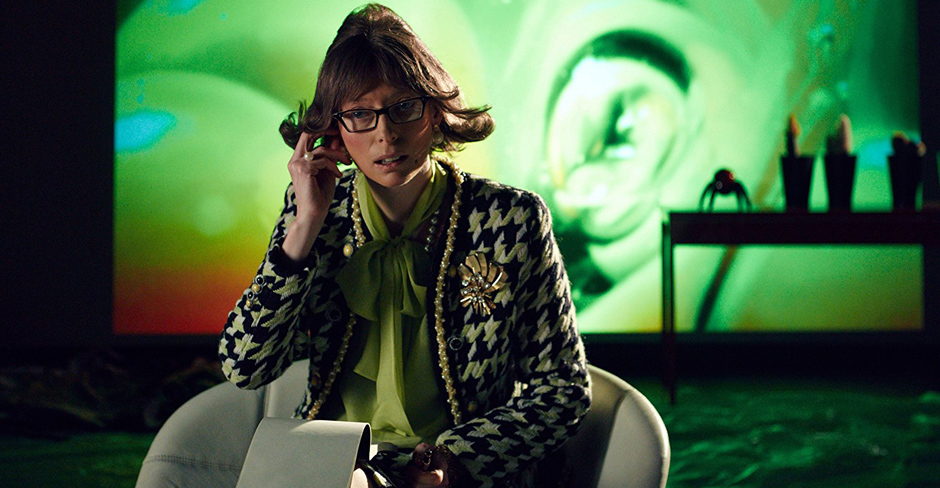 Tilda Swinton in The Zero Theorem

To his surprise, Leth is granted home leave, put on the condition that he use the time to prove the Zero Theorem, a proof that requires everything to add up to zero.  Management later explains to Leth that we begin in chaos and end in chaos and there is money to be made in-between.

But, if Leth’s faith in the telephone call turns him into a man of faith in Management’s godless world, he will have wasted his life. According to Management, the phone call revealing the meaning of life is what the man of faith waits for instead of living The problem with this argument is that there is not much life to live in Leth’s soulless, hedonistic, claustrophobic, and largely virtual world. 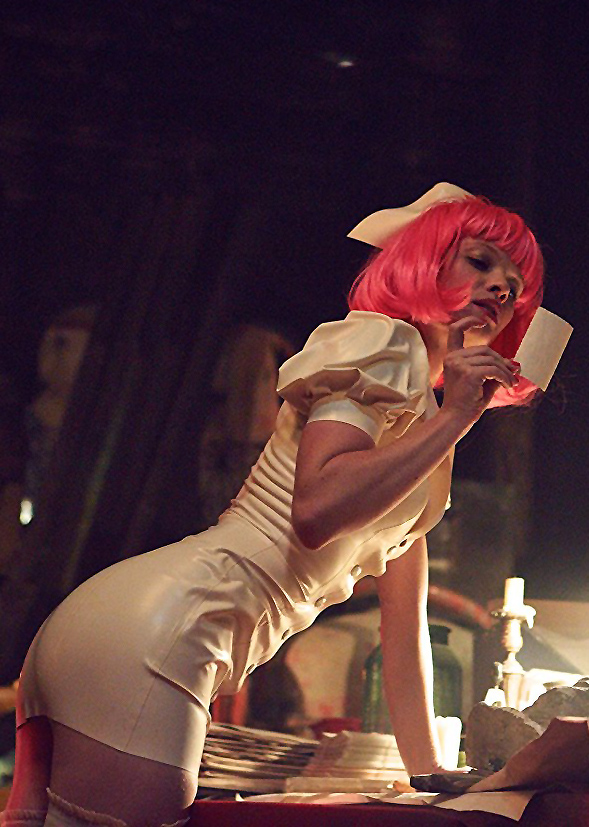 Mélanie Thierry in The Zero Theorem

To help him with the stress of solving the Theorem, Management provides Leth with a virtual shrink (Tilda Swinton), a sexy prostitute, Bainsley (Mélanie Thierry) and even Management’s own son, the child prodigy Bob (Lucas Hedges). Workaholic Bob calls everyone else Bob so as not to waste his brain cells retaining unimportant data.  Leth’s humanity is gradually reinvigorated by Bainsley and Bob, although he becomes disillusioned when he suspects they are no more than spies for Management.

Nonetheless, Leth’s paternal feelings and interest in his work are awakened when he spends time with the young, sympathetic prodigy. When Bob falls ill and Leth tries to save his life, however, he is accused of being a paedophile and sacked.

If Brazil was Everyman Lowry’s search for meaning and love in an empty bureaucratic world, so The Zero Theorem

is Everyman Leth’s search for identity and meaning in a world that is constantly plugged in but tuned out. With everyone today attached more to their earphones than to other people, Gilliam’s reminder that things have only gotten worse since 1985 is an important one.

The problem is that Gilliam has failed to come up with a story to match his visual wizardry.  The satire seems tired and heavy-handed rather than fresh and insightful.  The actors (who include Ben Wishaw as a Doctor) act broadly and lack any dimension or intrinsic reality.  That might well be the point, but it makes it difficult for us to feel that anything is at stake.

Waltz earned his Academy Awards for his ability to turn characters that might otherwise be overlooked or clichés into charismatic, unpredictable individuals that made you want to spend time with. Even Waltz, however, cannot do much with gormless Leth: he is too far gone for us to relate to him.