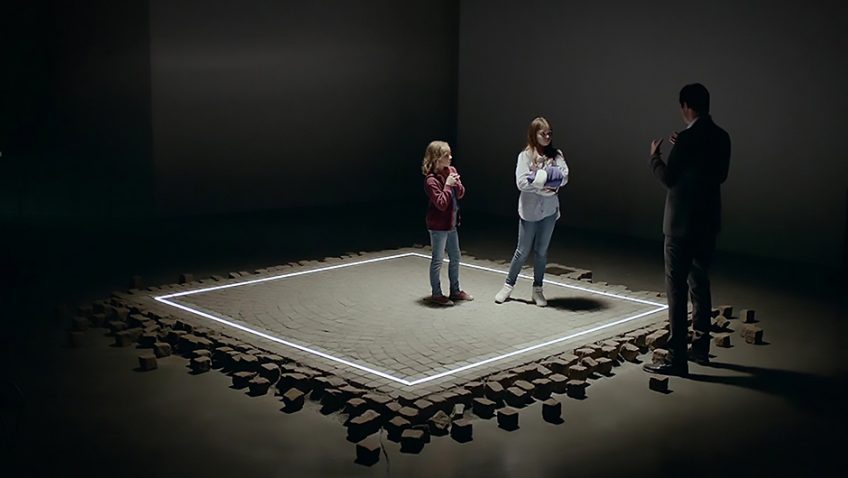 An ambitious, incendiary social satire obscured by its own brilliance

In his Academy Award-nominated breakthrough feature, Force Majeure (2015), Swedish writer/director/co-Editor Ruben Östlund examined the effects of a minor incident on a seemingly perfect middle-class couple on holiday. Applying his dark, incisive social satire to an examination of human frailty and gender malaise, Östlund was heralded as a new, original voice. A similar theme and equally impeccable acting, craftsmanship and production values are present in The Square

, a near masterpiece. But while The Square

is even more ambitious and thrilling than Force Majeure, it lacks the earlier film’s tight focus and someone you can identify with.

Looking as much like the new James Bond as the director of a modern art museum, suave and confident divorcé Christian (Claes Bang) sets out to publicise a new exhibit at the X-Royal Museum and raise money for new acquisitions. The highly conceptual exhibit is the 4 X 4 metre square: ‘a sanctuary of trust and caring within which we share equal rights and obligations.’ In a Q & A held in London recently Östlund mentioned that the idea came to him from the zebra crossing, a convention that works surprising well, giving those within the parallel lines a brief sanctuary during which society agrees that no harm should come to those with from traffic.

Christian is awoken from a nap to meet a nerve-wracking, awkward foreign journalist, Anne (the British actress Elisabeth Moss, superb). To her question, what is your greatest challenge, he answers, ‘money’. Christian explains. ‘If we buy more work, more people see it so it’s an obligation for us to get in the competition.’

Christian is surprised, but relieved at the one-question interview, but Anne is disarmingly crafty. She would just like him to explain something she heard him say, because, ‘I am not as scholarly as you are.’ The quote is absolute pretentious twaddle. Christian looks confused and asks to see the paper. ‘What that means is that by placing an object in the museum, does that make it art?’ 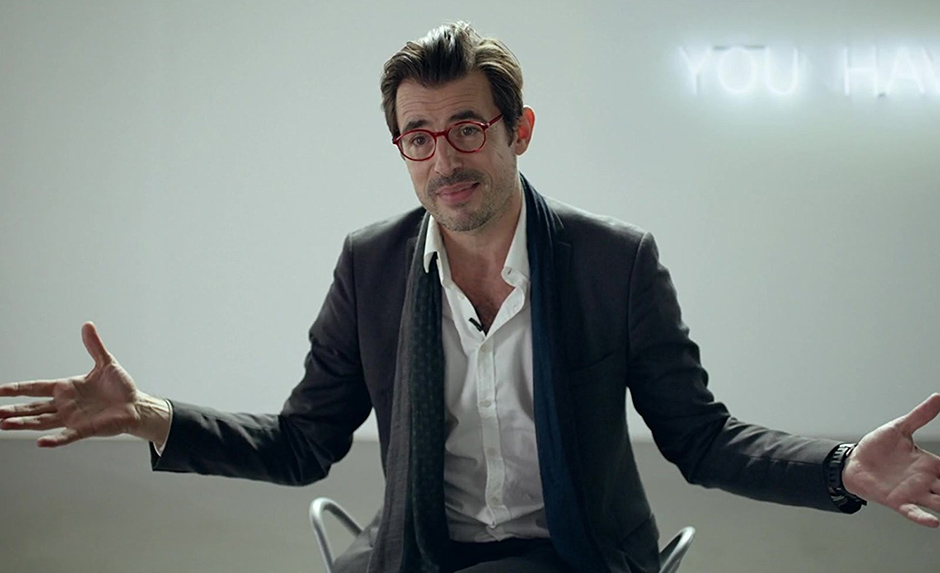 Claes Bang in The Square

The exhibit he might be referring to are rows of pyramid shaped piles of little stones resembling haystacks. They are guarded by a bored security guard and carefully tended to at night by a cleaner who tries to navigate between the rows. When his little machine accidentally sweeps up part of the installation Christian has to grapple with the very question he asked in his incomprehensible speech.

were only a biting, and hardly subtle, satire on modern art, it might not have been nominated for an Academy Award. But a minor incident in which Good Samaritan Christian has his wallet stolen in a scam, distracts him from his work. Like the husband in Force Majeure Christian turns out to be not only a wimp, but a self-obsessed elitist as he embroils himself in class and sexual warfare.

But it is the inane publicity stunt cooked up by trendy social-media PR consultants to publicise The Square exhibit that proves to be Christian’s professional undoing. 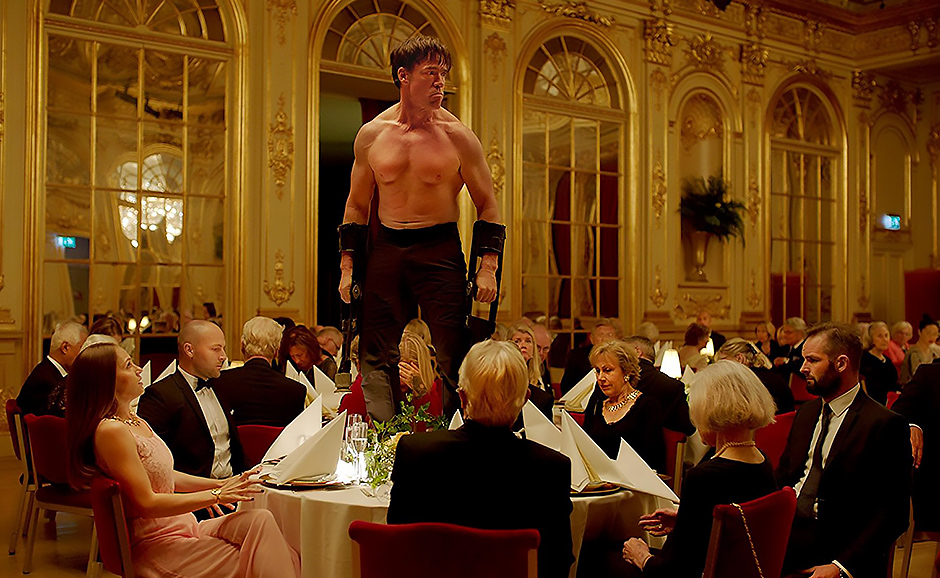 Terry Notary in The Square

In following the strand in which Christian executes a high-risk and thoughtless plan to recover the stolen goods we enter the world of Stockholm’s have not’s. A 7-Eleven (corner shop) that is the ‘drop point’ for whoever returns the stolen goods, introduces us to a low-paid shop worker and a fussy gypsy beggar. A brash young boy (Elijandro Edouard) tracks down Christian when his parents receive the note that, unbeknown to them, Christian had dropped into every mail slot of a targeted council flat building, and assume that their son committed the theft. The boy comes to Christian’s posh apartment building demanding an apology but Christian can’t let it go. His discomfort in these and other awkward confrontations throughout the film create varying levels of tension which we first experience in the interview with Anne.

But the tension becomes unbearable in two surreal scenes that could have made Oscar-winning short films in their own right. One is a fundraising dinner with, for entertainment, a piece of performance art that Christian has dreamt up to dramatise the law of the jungle. A stout, bare-chested, flat-faced actor (Terry Notary), moving like an ape, elicits smiles of admiration – at first. The wealthy diners are told: ‘If you stay still and do nothing the beast might overlook you and you’ll be safe in the knowledge that someone else will be the prey.’ A perfect complement to the new exhibit, The Square, like everything Christian gets involved in the evening backfires. 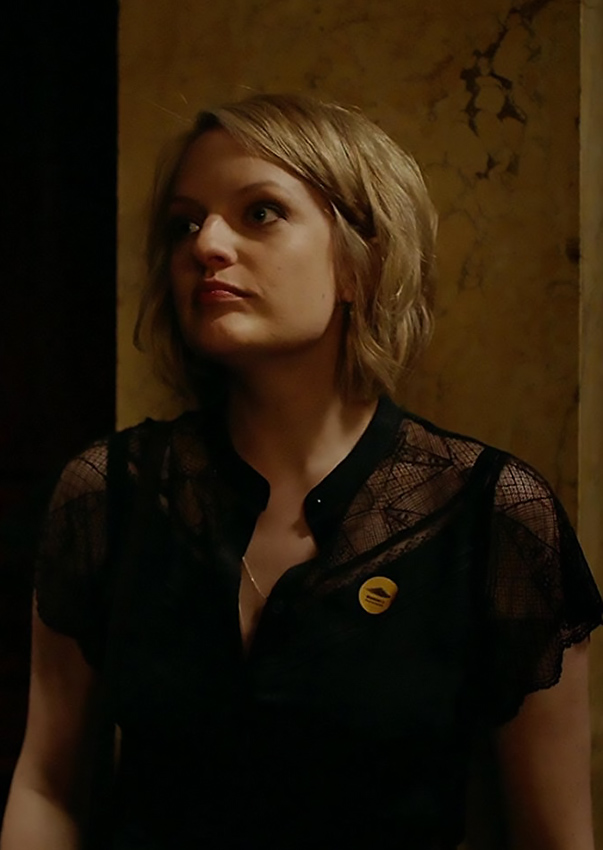 Elisabeth Moss in The Square

The second set-piece explodes with excruciating sexual tension. After too much to drink at a party, Christian is seduced by the predatory Anne who takes him to her apartment (where, unexplained, an artistic gorilla – real, this time – gets comfortable on the sofa). After sex, Christian and Anne argue about who is going to throw away the condom in an ugly display of sexual warfare. The mistrust continues the following day when Anne confronts Christian in front of the museum guards. Her relentless questions about his sexism and promiscuity sound even more grating as she is continually made to shout over the loud background noise in the museum.

Characters are continually being interrupted by sounds, noise and distractions, from an adorable baby crying during an office meeting, to a man with Tourette’s syndrome whose embarrassing sexist outbursts interrupt a female interviewer and a guest artist (Dominic West). In asking the question, how do you react to such a situation, Östlund introduces yet another of the moral dilemmas scattered throughout the film, one that must be linked to the sporadic cries of ‘help me’. The plea is heard in several contexts, beginning with a little girl who enters the Square in a video that goes viral; repeated by the boy accused of theft; and by Christian, when he loses his two daughters in a shopping mall and relies on a tramp to watch his designer purchases while he tries to find them.

As Christian begins to lose control of his life and career, the film’s underlying social satire and narrative drive become buried in a stimulating bombardment of ideas and confrontations with people you would not want to spend time with. The Square

has the makings of a masterpiece, but the whole is less than the sum of its many magnificent parts.