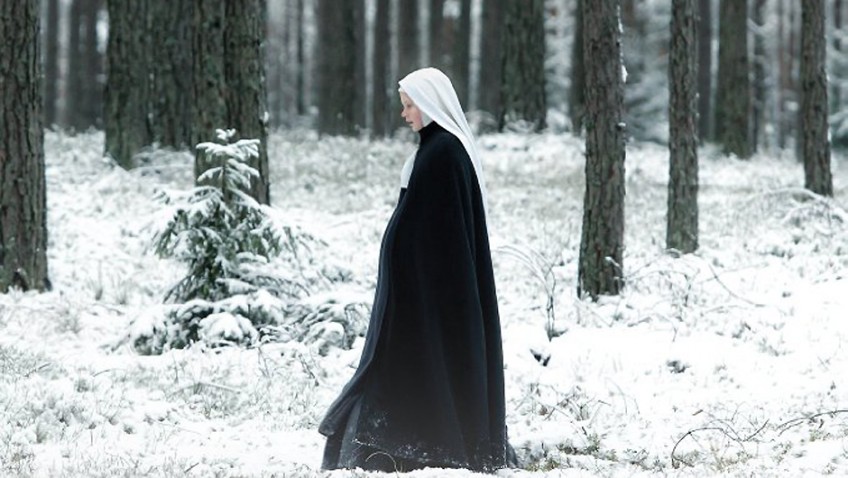 It is widely known that the Russian ‘liberation’ of Poland (1945-1947) was more a case of the lesser of two evils than a joyful liberation, with looting, murder and particularly rape, only too common. One reason the rapes have been whitewashed from history is that the Catholic victims felt unable to talk openly about their ordeal while preserving their dignity and welcome in the conservative community.   If that were the case for the average rape victim, we can only image the impact of rape on the nuns in a convent. Yet this is the subject of Anne Fontaine’s engrossing, but unevenly unfocused and non-fictionalised film, The Innocents. Dr Madeleine Pauliac was 33 when she was appointed chief doctor at a hospital in Warsaw that lay in ruins at the end of the War.  She was responsible for the Red Cross’s repatriation of French soldiers still in Poland, many of whom needed medical attention before being sent home.  In the film, Pauliac’s name is changed to Mathilde Beaulieu, and she is not only played by a younger actress (26-year-old beauty Lou de Laage), but is demoted to a more junior position.  Both of her supervisors reprimand Mathilde for her mysterious absences; for using the Red Cross jeep and for driving into unauthorised territory during the night, risking her life and the jeopardising the mission’s work.

But Mathilde is no renegade and is not out meeting a lover or partying.  She is delivering babies at a convent where nuns had been raped by Russian troops and where six are heavily pregnant.

The conflict in the film is between Mathilde, an atheist and communist, and the Mother Superior (Agata Kulesza, Ida) who distrusts Mathilde, and not only because she has a terrible secret weighing on her conscience.   There is a clash of wills between the proud, conservative Mother Superior (who is also pregnant) and the no-nonsense doctor.  The intermediary is the wise, diplomatic Nun Maria (Agata Buzek) who, more worldly than the other nuns, bonds with Mathilde and helps to build an atmosphere of trust and cooperation between Mathilde and the nuns.

Over time Mathilde learns that the Russian or Polish Red Cross would shut down the convent if they knew the truth and the nuns would be shamed and rendered homeless.  The only reason the nuns survived –in the real incident, 20 of the 25 nuns raped were murdered, with the rest allowed to live out their shame – was because one nun had a boyfriend in the Russian army who helped save them from death.

During this period Mathilde witnesses the crisis of faith that the pregnant nuns are enduring.  Caught between the guilt and sin of pregnancy and the sin of suicide the women have to find faith in a God who watched the atrocities. Gradually, Mathilde begins to admire the strength of their faith. She also works to help the nuns accept the babies and, since they would otherwise be killed, bring them up in the convent.

There is also the conflict with Mathilde superiors. Toward the end, when three nuns are due to give birth at the same time, Mathilde is forced to trust Samuel (Vincent Macaigne), a Jewish doctor who considers the Polish as guilty as the Nazis in the treatment of his people.  Samuel relents, not only out of professionalism, but because he is having sex with Mathilde in a pragmatic arrangement.  This fictitious relationship adds some much needed levity to the grim scenes in the convent, and a much needed dimension to Mathilde’s character.

The performances are generally strong, although Agata Kulesza is not given a role anywhere near as rich as that of Aunt Wanda in the Academy Award winning Polish film, Ida.  Lou de Laage does a good job holding up the tension between the worldly, sexually liberated, communist doctor and the deeply religious virgins, but, her striking beauty aside, she seems too young for the role, which feels muted or unwritten.  Despite this engrossing subject matter, the middle of the film sags somewhat because there is only so much we can take of nuns running around the convent while they take turn giving birth.

It is both curious, and a bit of a shame, that we are not told in an opening caption that  the film is based on a true story.  Without this, there is something if not creepy, then exploitative and lurid about a story of nuns having babies.  It is also curious that The Innocents is not a biopic of the resistance heroine (posthumously awarded The Legion D’Honneur and the Croix de Guerre) and Red Cross doctor Madeleine Pauliac who was to die in a car accident in Szczecin (coincidentally, where Agata Kulesza was born) the year after the incident described in the film. Her story is used  as the basis of this incident in her career, but the film feels unbalanced in that she is not really the focal point.

Fontaine (Gemma Bovery, Coco before Chanel) is less interested, however, in the remarkable real-life heroine, Pauliac, than in probing issues of faith, tested to the extreme. The romantic subplot involving Mathilde’s boss Samuel, a fictional Jewish doctor, momentarily introduces another perspective.  When the Mother Superior reacts to his Jewish name, he volunteers, ‘Yes, I’m Jewish; there are a few of us left.’