Home / LIFESTYLE / REVIEWS > / FILM REVIEWS / Hilarious and heart-breaking, Sean Baker’s tale of a purple motel will win you over 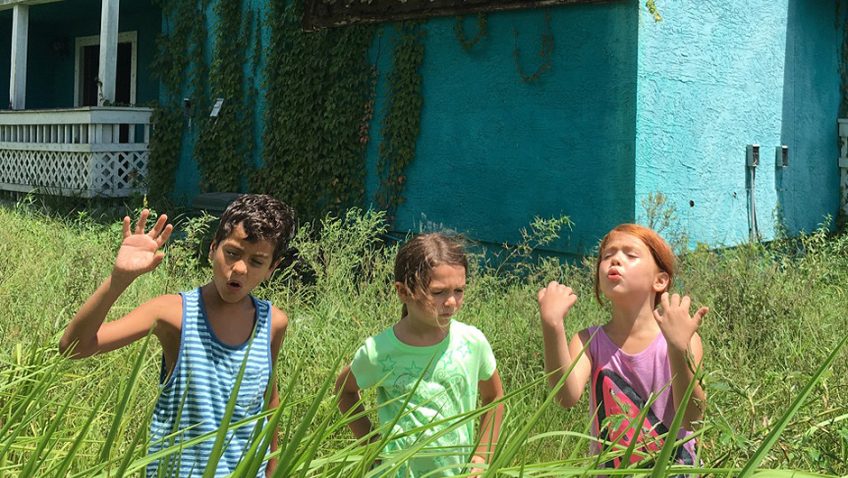 Hilarious and heart-breaking, Sean Baker’s tale of a purple motel will win you over

If you missed Tangerine last year, citrus-lover Sean Baker will warm your autumnal hearts with The Florida Project

. Director and co-writer Baker (and producer/ co-writer, Chris Bergoch) find beauty and poetry in the lives of the disenfranchised, allowing us to inhabit worlds we could only shun before meeting their inhabitants. Baker breaks down barriers between the audience and his subjects with a combination of humour and his terrific (largely non-professional) cast.

than in any other film this year, but dark clouds gather pace throughout a narrative that slowly builds towards a cathartic denouement. Six-year-old Moonee (Brooklyn Kimberly Prince) lives with her young mother Halley (23-year-old Bria Vinaite) in their untidy room in the Magic Castle Motel. They share the three-storey motel with other marginalised families who lead a precarious existence on the outskirts of Orlando.

The motel is painted in the bright colours of nearby Walt Disney World, a destination that is so near and yet so far. The hard-working motel-manager, Bobby (Willem Dafoe), touches up the paint, hauls worn mattresses down the often broken lift and enforces poolside rules in a hands-on manner. This proves awkward when a topless resident (Sandy Kane) stubbornly refuses to cover up. Bobby gives the down-at-heel residents respectful attention while mediating between the owners, the public and his most troublesome residents – Halley and Moonee.

Bobby is a wonderful character who, you suspect, must have been drawn from a real person. He recognises that while other children have summer camp, beach holidays, and trips to theme parks, playing hide-and-seek in the motel is all that is available for his residents. And somehow the resourceful Moonee – who devises an ingenious ploy to get ice-cream at the local soft serve joint – creates adventure where there is none. She reminds us how childhood is a magical state of being that does not need many props to maintain the illusion.

Moonee is the leader of the pack and, like her mother, has a tendency to go too far, alienating her from her friends or rather, from their parents. In the first escapade we witness, Moonee and two friends stand on a balcony of a nearby motel and spit over the rail onto a car. While she loses one of her friends when his father decides Moonee is a bad influence, Moonee meets her new best friend Jancey (Valeria Cotto) when she is forced to clean Jancey’s mother’s car. As Halley, Jancey and her mother look on, Moonee tells Jancey, ‘it’ll be a whole lot easier if you helped us.’ Willem Dafoe and Brooklynn Prince in The Florida Project

This cheeky remark and audacious ploy to get the aggrieved to help clear the grievance reveals something else about childhood. Moonee makes the car cleaning fun and Jancey is more interested in joining in – and making a new friend – than she is in meting out punishment. It is also an example of how Moonee takes after her mother, so adept at deflecting blame or dismissing any accusation of wrongdoing.

Moonee is making the most of her last summer before starting primary school and she and her ragtag group of friends occasionally refer to the big event, with Moonee having decided she will not be doing homework. The children are as adorable as they are wayward, but none more so than Moonee, who has picked up on Halley’s disdain for authority. Halley is a hustler, selling everything from fake perfume to her own body to pay the rent. When she hears something she doesn’t want to, she is quick to react with physical violence or another unbecoming form of revenge.

In one disturbing scene, Moonee is playing in the bathtub, when she (and we) hears a man in the room. Baker goes for a close up of Moonee in alert mode, suddenly vulnerable and serious. You could say Halley is a bad mother, but part of the beauty of Baker’s films is how non-judgmental they are – to the point of enabling us see another side of this desperate young woman. Perhaps because she is a child herself (one who never had much of a childhood), Halley wants Moonee to enjoy her freedom while she can. Halley tries to shield Moonee from the worst of their hand-to-mouth existence. They lie in bed together watching TV and eating pizza, play tag in the warm summer rain, have burping contests, and, to celebrate an illicit windfall, go on a buying spree, splurging on cheap costume jewellery.

Everything Halley does is to pay the rent and feed her daughter, albeit with a diet of junk food and carbohydrates. Still, maintaining the illusion of normalcy or stability is Halley’s biggest challenge. For one thing, to prevent the tenants from establishing residency, Bobby has to move Halley from time to time to a different room. For another, when Halley is short on the rent, and Bobby offers to make up the difference, the new owners decide they’ve had enough of her insolence and kick mother and daughter out on the street.

In one of the most heart-breaking scenes you are likely to see this year, Halle fears for the worst and takes Moonee to breakfast at an upscale hotel where a mouth-watering buffet breakfast awaits them. As we watch Moonee joyfully shovel fresh summer fruit and pastries into her mouth, Halley watches her daughter with a reassuring smile that turns to anguish whenever Moonee is distracted. For Moonee picks up on everything, like an animal that has evolved to sense danger. What happens, Baker seems to ask when neither can protect the other?

It is easy to overlook the connections in this deceptively simple tale about the magic and pains of childhood, but nothing is gratuitous. In one scene, as the boisterous kids ignore Bobby’s commands to get off the picnic tables, a stranger approaches them like a cat among the pigeons. Quickly identifying the man as a paedophile, Bobby calmly intervenes to force him off the property as the curious children look on. Toward the end of the film, Bobby finds three stranded herons in the driveway – a seemingly random image that is nonetheless portentous. This time, Bobby shoots the intruding heron away to protect them from harm.