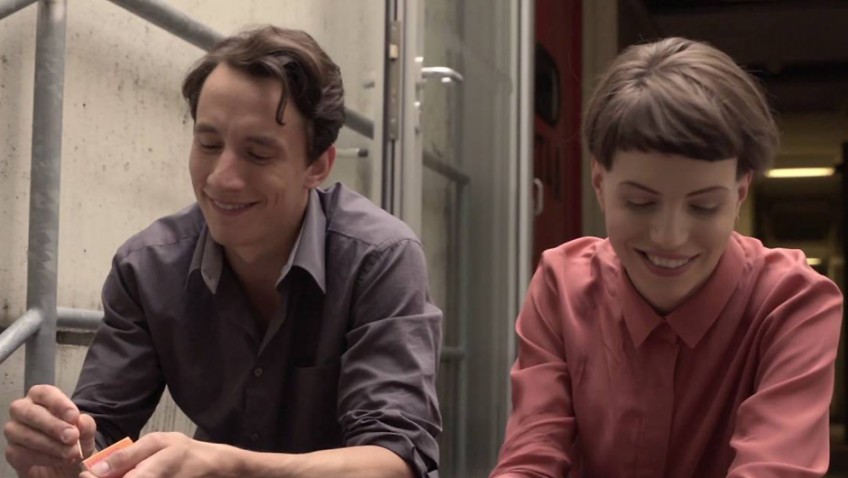 Sixty-four-year-old documentary filmmaker Ruth Beckermann decided to work with actors for the first time in treating a subject that might have been more accessible with a more conventional approach. Set in the beautiful Art Deco broadcasting building the Funkhaus, ominously completely in 1939, two actors separated only by microphones, read to one another from the correspondence between the Jewish Romanian poet Paul Celan, whose parents perished in concentration camps, and Ingeborg Bachmann, daughter of an Austrian Nazi headmaster. Some readers, and those who saw the Anselm Kiefer retrospective in 2014, with its powerful monumental art works commemorating Celan, might know who they are.  But even if you have done, nothing prepares you for the beauty, intensity and stark revelatory nature of the 20-year correspondence that is the subject of The Dreamed Ones. 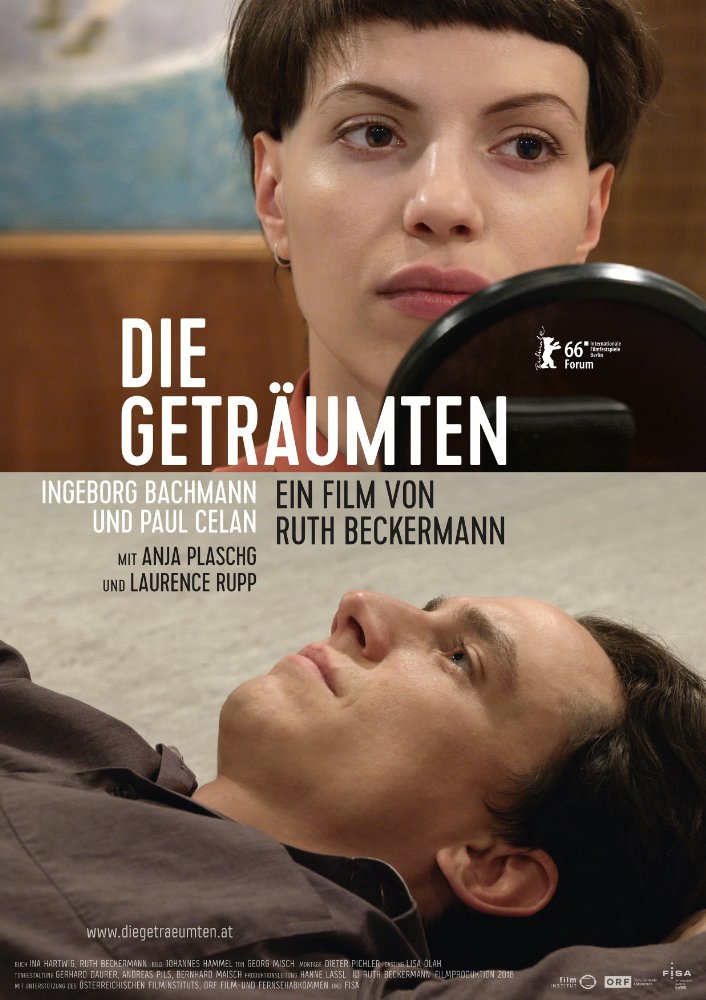 Perhaps it is in part because Beckermann is an Austrian whose parents are Holocaust survivors that she was so drawn to this attraction of opposites.  The pair met in Vienna in 1948 when Celan (his pen name) was a 27-year-old unpublished poet on his way to Paris and Bachmann was a 22-year-old philosophy student preparing a PhD on the philosopher Martin Heidegger.

The film refuses to become a biographical arts documentary, and most background about their lives is either inferred from the letters (city and dates are given) or from the occasional contextual caption. But since there is nothing expository in the letters, some background is helpful to help interpret and understand the reactions and emotions that emerge during the course of the correspondence.

Celan (his pen named) was born and raised in Czernowitz, Bukovina in Romania (now the Ukraine) where he learnt Hebrew and spoke fluent German. After the Anchluss put an end to his medical studies in Tours, France, he began a degree in romance languages in Romania. Interned in a Romanian labour camp during WWII, he received the news that his parents had perished in a concentration camp in the Ukraine.  After the war he made his way to Paris where he married and had two sons, one of whom died after birth (not mentioned in the letters).  Although Celan was celebrated after his first collection of poems, he had to make a living translating and later teaching a secondary school in Paris (mentioned in the letters).

Bachmann, born and raised in a backwater region of Austrian between Slovenia and Italy, was the daughter of a headmaster who was a member of the Nazi party.  She became one of the most acclaimed post-war poets writing in German and was a successful writer of radio plays, opera libretti, articles and a novel.  But Bachmann wrote (not in the correspondence) that her childhood had been destroyed when Hitler’s troops marched into Klagenfurt in April 1938.

As we learn in the film, both poets led troubled lives that ended tragically for both.  Celan never recovered from the guilt over his parents’ deaths and what are now considered anti-Semitic-based accusations of plagiarism. He drowned in the Seine age 49 in 1970. Bachmann died in a house fire three years later, age 47.

Musician and actress Anja Plaschg has luminous skin, big eyes, a soft, forlorn voice, Laurence Rupp, a handsome theatre actor of repute, is more reserved, but more volatile, and makes a perfect counterbalance. The opening poem, In Egypt, is dedicated to Bachmann on her 22nd birthday with the words, ‘to one who is painfully precise.’  Is this ‘precise’ a criticism? The ‘pain’ runs throughout their letters. The poem contains the haunting verses, “Adorn the stranger beside you most beautifully. Adorn her with the pain for Ruth, for Mirjam and Noemie”.

Celan waits impatiently for a reunion in Paris in 1949, but Bachmann does not come.  He writes of his loneliness in France and she cannot bear it. ‘I plan to build a ship and bring you home from your forlornness,’ she writes, as Plaschg’s eyes fill with tears. ‘Let’s take a break,’ she suggests to Rupp and at times in their cigarette breaks, we hear their comments on what they have just read.

On 7 September 1950 Celan helps Bachmann get a visa. ‘I believe Paris can help you get through your grief…and I may help Paris,’ he wrote.  ‘Let us not speak of things that are irretrievable,’ she writes. Seven years later Bachmann begs him not to leave his wife (the graphic artist Gisèle de Lestrange) and child (Eric, born 1955). ‘I will not be able to embrace you,’ she warns. (They separated in 1967).

‘Paul, your roses were there when I moved in,’ Bachmann writes referring to her new apartment in Munich. She writes about furnishing her apartment. ‘Shall I come visit you,’ he writes seductively, ‘and maybe help you find a lamp?’ No invitation came.

In 1958 Bachmann tells Celan that she is moving to Zurich to live with (the Swiss author) Max Fritsch.  In a painful close up at another time, Rupp reads out loud a scathing review of his poetry.  He then launches into an attack on her, ‘you console me with games,’ telling her not to send her letters, articles or books as he needs to think of his mother, Gisèle and ‘my child’ (never mentioned by name).

Beckermann’s minimalist and direct approach is the most effective way to focus on the letters.  The emotions behind them are so complex and their expression so poetic, that any pictorial images of places and people (as Beckerman had originally envisaged) might have been distracting.  Physical passion, but also professional jealousy, frustration, regret and sorrow run through the letters.  Some of the letters were so painful to write that they were never completed or never sent.

It is only when a kind of parallel story is hinted about with the actors (Plaschg bears a resemblance to the young Bachmann), that the choice becomes awkward and even pretentious.  As the two actors smoke, we learn that the fire that killed Bachmann may have been started by a cigarette.  Though just 89 minutes, this film is tough going. But it may well lead you to the nearest bookshop to purchase the translated correspondence (which includes Celan’s passionate letters to Gisèle).