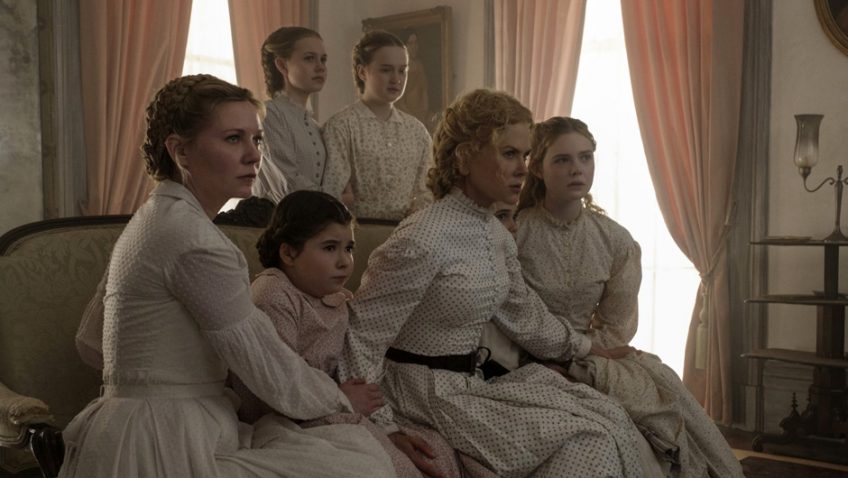 What kind of a film is The Beguiled

? Three years into the American Civil War, five Southern girls and two teachers at Miss Farnsworth’s Seminary for Young Ladies agree to shelter a wounded Union soldier until he is well enough to leave. The soldier, Corporal John McBurney, grow quite attached to his comfortable sanctuary and thinks up reasons for the ladies to keep him on. And by then, the lonely women are only too glad to overlook his dubious allegiances and comply. As they vie for the handsome, smooth-talking soldier’s attention he grows in confidence, taking the women’s conditional Southern hospitality for granted.

That Clint Eastwood was playing against type contributed to the unexpected box office failure of Donald Siegel’s film, critically acclaimed in 1971. The difficulty of classifying the film and marketing it also contributed to this failure. Is it a Gothic thriller? A doomed love story? A historic drama about people pushed to the limits in war time? A titillating adult movie? A tragedy or a black comedy? Academy Award winning (for the script of Lost in Translation) writer/director Sofia Coppola has remade Siegel’s 1971 film with a feminist slant, which only adds to the confusion. In fact, if you watch the trailer in the cinemas (not advised, as it tells the whole story and gives away the ending), it is presented as a horror film.

A young girl living out the Civil War in a Virginia boarding school is picking mushrooms when she comes across a wounded Union soldier. The soldier is good looking and reassuring. Thinking of the well mannered and pious headmistress, Martha Farnsworth (Nicole Kidman), the girl does the Christian thing. She leads the soldier to the slightly overgrown plantation where Martha, who inherited the property, shelters a small group of students and one other teacher, Miss Edwina (Kirsten Dunst).

Ms Farnsworth, a former Southern Belle in her immaculate, white ante-bellum dresses is not happy about an enemy soldier in their midst. But, a woman who conducts bible reading classes, and insists on prayers before meals and bedtime, cannot leave a wounded man to die. As she sets about nursing the soldier back to health, her repressed sexual needs flow to the surface. As played by Kidman (in one of her best performances in years) there is no hypocrisy in her demeanour, as she is not a self-righteous prig. She believes in tradition and decorum, and is surprised at the depth of her own feelings. There is a wonderfully erotic scene at the beginning in which Martha cleans the unconscious man, stopping gingerly at his private parts and rushing to the wash bowl to release the longing she feels. The audience giggles.

Unbeknownst to Martha, who is beginning to enjoy the private conversations with her patient over tea, McBurney has declared his love to the somewhat dour and downcast, younger teacher, Edwina (Kirsten Dunst) who laps up his emotive advances, even if they leave us cold. He seems to sense that she is his meal ticket out of the war; and that could have been the case, had he not been seduced by the hormonal teenager Alicia (Elle Fanning).

The ladies try to get a handle on McBurney, who speaks with an Irish accent. They believe he is a mercenary which means he is shirking his paid work. If he’s a Union soldier, he’s a coward. But the women do not seem to mind and we never learn his story. The women are not harpies, but bored females responding to the playfulness of their guest, a charmer who seems to say just the right thing to everyone.

Coppola’s attempt to make a feminist version of Siegel’s original tones down the sexuality of Siegel’s film, milking the slow release of sexual repression for laughs. This extended middle section that plays out like a Noel Coward comedy of manners. When the ladies finally invite the Corporal down to dinner, they dress up to outdo one another. Much is made of a metaphorical apple pie, as the nubile Alicia sends a seductive smile across the table as she says, ‘I hope you like apple pie.’ Edwina, however, ensures that her paramour knows it was made with her recipe.

While sticking faithfully to the plot of the underlying source novel, Thomas P Cullinan’s, A Painted Devil (1966), Coppola adds restraint all around. She leaves just enough animal instinct beneath the stiffly ironed dresses for the audience to enjoy the innocent humour – right through a shocking mutilation scene.

Recently Coppola was asked to direct a Milan opera production of Verdi’s La Traviata with costumes by the designer Valentino. Set in the Parisian demimonde a decade or so before the American Civil War, the main character is a courtesan dying of TB. Her lover is a young, bourgeois man who wants to save her despite the prevailing social mores. Though Coppola was presumably brought in to give the opera (which was broadcast into cinemas) a feminine slant, she failed to add any originality or fresh ideas to the surprisingly staid production.

Similarly, her attempt in The Beguiled

to present the film from the point of the view of women who are beguiled, but never fooled and preserve their dignity, remains puzzling. When the tone of the film changes in the last quarter, it is not enough for the ladies to be slightly annoyed with their guest for doing what naughty boys do. For the action (no spoiler here, go to the trailer for that) to be convincing, they have to be as angry as hungry lions whose prey has been stolen by a rival pride.

Coppola presents her parable in soft pastels and gentle storybook light where everything is beautiful, despite the war. It looks soothing and lovely. Everything is covered in a hazy light like a lace curtain hiding what is really going on. Once or twice Confederate soldiers come by, but the plantation, with its imposing white columns, is an oasis in the desert of war and rape is out of the question. McBurney does some work on the garden which is supposed to provide their fruit and vegetables, but it’s in bad shape and you wonder how it has managed to feed them for three years.

If, over at Tara, the women were starving during the war; here they have so much to eat that they can afford to be choosey about mushrooms. McBurney is too self-obsessed to notice that none of the hostesses are eating the mushrooms. He remains beguiled to the bitter end. And you might be too, as Coppola won the Best Director Award at the Cannes Film Festival for this film.