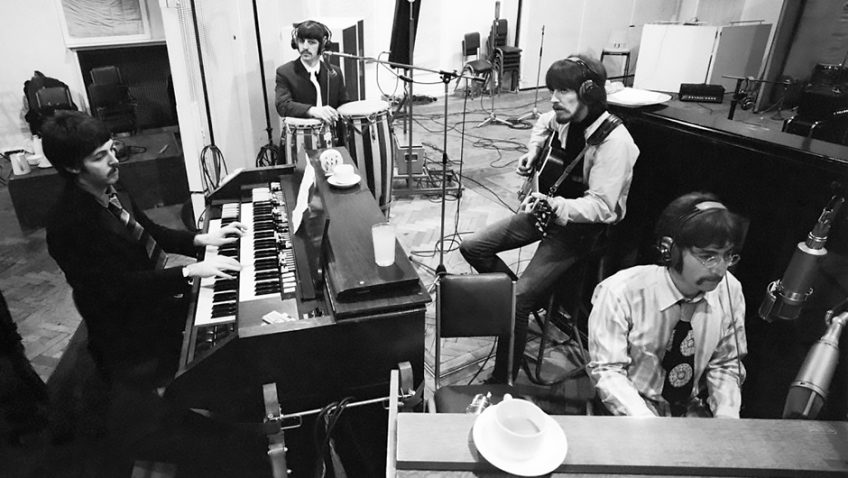 We loved them yeh, yeh, yeh. Ron Howard’s magnificent look back at Beatlemania

With the arrival of Ron Howard’s (Frost/Nixon, A Beautiful Mind; Apollo 13) documentary, The Beatles: Eight Days a Week – The Touring Years

, everyone in the country born between 1935 and 1955 should be given a free cinema ticket along with their winter fuel payment. For this documentary, that traces the phenomenon of Beatlemania through the band’s live concerts, will warm your heart and put a spring in your step.

The film is more powerful than nostalgia and more personal than pop history: it is your and our history. As Malcolm Gladwell points out: ‘Because of the baby boom, society was dominated by teenagers [in the 1960s] and the film puts you in touch with your teenage self. If you don’t spot yourself in the background of performances at the Cavern Club in Liverpool; the Indra Club in Hamburg; New York’s enormous Shea Stadium or the relatively new Candlestick Park in San Francisco, you will remember dancing to She Loves You and I Want to Hold Your Hand.

Or, if you are ten-year-old Woopi Goldberg, clutching a ticket to Shea Stadium on September 15, 1964; or teenager Kitty Oliver at the Gator Bowl in Jacksonville, Florida, you remember a personal liberation. Goldberg credits the Beatles – she never thought of them as white men — for reassuring her it was all right to be different. When the Beatles heard that the Gator Bowl was segregated by seating, John Lennon in particular was adamant that they would not appear. In any event, the Civil Rights Act had just been passed so it was illegal. One of only a handful of blacks in the stadium that day, Kitty Oliver remembers: ‘There were all these white people around but we all stood up and screamed. That was the first experience I had where differences didn’t matter.’

Along with the fun of watching thousands of young girls fainting and weeping; of exasperated policemen, a bewildered Ed Sullivan and so many witty and never-before-seen interviews (some of the video and stills are from the Beatles’ personal archives) with the Beatles and others, Howard shows us the other side of their road to riches and fame. It wasn’t overnight, as George is quick to remind us. ‘I was 17 in the naughtiest city in the world…Hamburg was quite a mess. We were all huddled together in one room with no bathroom. But that was nothing new.’ They toiled eight days a week (apparently a term Ringo Starr came up with to describe those manic early years), but when super manager Brian Epstein sent them on pop history’s first and longest global tour, the euphoria very gradually turned to disillusionment. 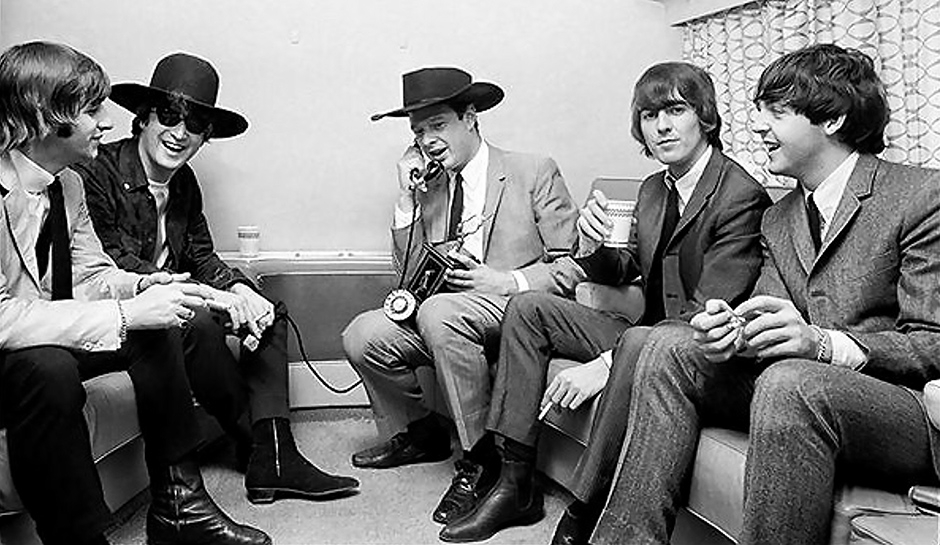 The Beatles’ appearance on the Ed Sullivan show at 8:13pm on February 9, 1964 is one of those moments in history that heralded a new order. In this case, the dawn of youth culture and teenagers. Yes, there had been James Dean and Elvis, but the Beatles united teenagers around the world as a distinct demographic entity.

Brian Epstein discovered the Beatles in one of his parents’ record shops in November, 1961 when, ‘someone was asking for a record by the Beatles.’ Epstein went to see them at the Cavern Club and recognised star quality. ‘Whatever that is, they had it.’ As Paul tells us in a specially made interview for the film, ‘he [Brian] had a vision of us beyond the vision we had of ourselves.’

Epstein gave them matching tailor-made suits, haircuts and a place in a team. ‘I am an only child,’ Ringo tells us in an interview for the film, ‘and I felt like I had three brothers.’ And that teamwork was a defining factor in their success. They made decisions as a group, wrote songs as a group (with, at first, John and Paul leading with chords and words) and, when the stadiums became so large and noisy that they could not hear one another, they seemed to communicate through osmosis – and their musical genius. 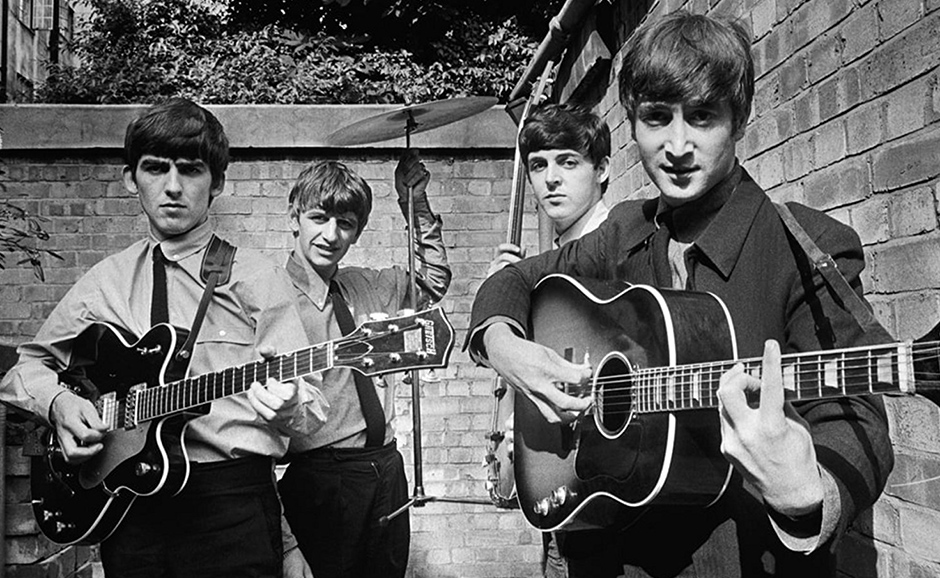 Epstein’s approach to the US market was cautious. To maximise their tour dates, it was essential for the band to arrive at the airport with a hit song. In December 1963, disc jockey Carol James played ‘I want to hold your hand’ for the first time on the US airwaves. While the Beatles were performing at the Olympia in Paris, they received the news that the record had shot to number 1. The world’s largest television audience – seventy-three million people – tuned in to Ed Sullivan. The result was sold out concerts and a succession of number 1 records. As Ringo adds, as though still amazed: ‘For some reason, they loved anything we put out.’ 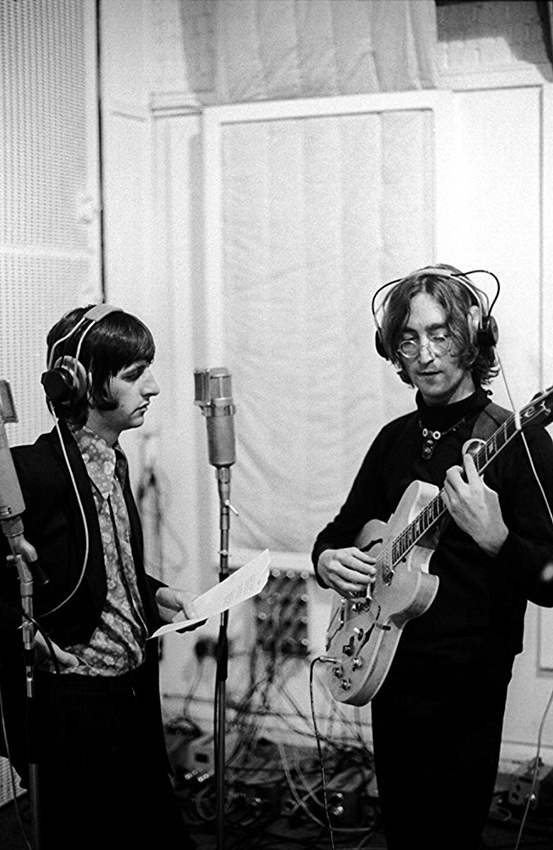 John Lennon, Ringo Starr, and The Beatles in The Beatles: Eight Days a Week – The Touring Years

Richard Lester is briefly interviewed about the film, A Hard Day’s Night. United Artists wanted it finished by July because they feared the fans would die out with the band by the end of the year! When it came to the next film, Help! Paul says, ‘we were all pretty disinterested.’ At this point, they were having meetings on tax shelters and were advised to put their money in the Bahamas. That gave them the idea to shoot Help! in the Bahamas, which they did. Paul adds, ‘In all truthfulness, we spent a lot of that film completely stoned.’

American journalist Larry Kane, who accompanied the Beatles on their global tour (815 venues in 90 cities) describes the frantic pace of the work and the police that were never prepared. Worse, was the increasing disillusionment with the quality of the sound. For with success came larger crowds and larger venues until they were ‘a freak show’, performing in football stadiums like Shea Stadium where the sound was bad and few of the 56,500 fans could see them let alone hear them.

It was a combination of the increasingly compromised quality of music on the tour; their desire to progress their composing in the recording studio (the result being Sergeant Pepper); and the fact that they now had families, that ended the touring years. Their final concert (with the exception of one on the roof of their offices on January 30, 1969) was at Candlestick Park on 23 August 1966 – the final city in their third US tour in four years. Ticket sales were down due in part to a controversy over John Lennon’s ‘The Beatles are more famous than Jesus’ remark. That created a backlash (and not just in the Bible Belt) despite John’s televised apology (or explanation) that is covered in the film.

In April 2014, Paul McCartney returned to the venue for the first time in 48 years to perform in the final concert at Candlestick Park before it was demolished. Shea Stadium had been demolished in 2009. If you stand on the sites when the wind is blowing, you can still hear the screams and something resembling the rock of ages. Better still, go see The Beatles: Eight Days a Week – The Touring Years

, and spend quality time with your younger self.