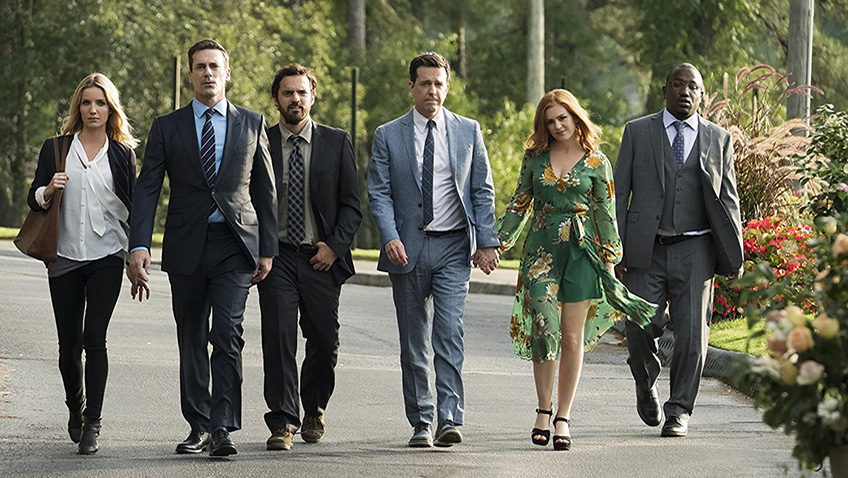 The film is based on a 2013 Wall Street Journal article about ten childhood friends who manage to stay in touch since 1983 across distances and lifestyles by playing a game of tag every May. Wisely scriptwriters Rob McKittrick (Waiting…) and Mark Steilen (The Settlement (1999)) have reduced the number to a more manageable five, and address the obvious gender imbalance by changing the Wall Street Journal editor/reporter from the real Russell Adams to Rebecca Crosby (Annabelle Wallis).

In addition to Ms Crosby, there are three other women involved in the games. Hoagie’s assertive wife Anna (Isla Fisher) is like the getaway driver to a team of bank robbers and takes the game more seriously than does her husband. Cheryl (Rashida Jones) plays an old flame who ignites the high school rivalry between Chilli and Bob; and Jerry’s fiancée, Susan (Leslie Bibb) who pleads with the guys not to interfere with her special day. The talented Ms Fisher is funny enough in a role that has a tacked on feel to it; while the Cheryl subplot goes nowhere. Susan plays the trophy wife bimbo role so perfectly that Jerry’s opponents give her no credit for having any of his competitive guile.

But this is, like The Hangover series (in which Ed Helms plays a hapless dentist) a story of male friendship which is both sufficiently politically correct to pass muster and even refreshing. Over the years, the sophistication of the strategies and defenses has increased with the maturity, experience and, for the majority, increased bank accounts, of the players. But this year the stakes are higher than ever.

When the film opens Hoagie is being interviewed for a job as a janitor in Bob’s company, while Bob is charming the Wall Street Journal reporter, Rebecca, and doing his best to sidestep a question about some recent negative publicity pointing to improprieties. Despite being overqualified and throwing away his interviewer’s untouched drink in an overzealous moment, Hoagie gets the job and insists on starting immediately. But of course what he is really after is the advantage of surprise over Bob, who will become an unsuspecting (he has forgotten that it’s May) ‘it’. 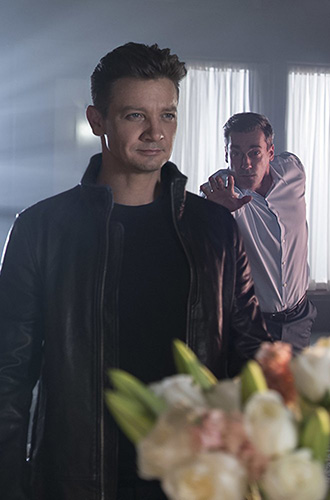 The exchange between Bob and the now undisguised janitor intrigues Rebecca who becomes more interested in following the tag story than in postponing the interview about Bob’s company. Hoagie tells Bob that time is of the essence because ‘we have a real shot at Jerry (Renner) this year,’ a remark he apparently repeats every year. But this year is different. Jerry is not only getting married, which might distract him, but, as a result, is about to call it quits. And Jerry, as they are all aware, remains annoying untagged over 23 years.

After a kind of Dog’s of War and The Dirty Dozen drive to gather his troops, Hoagie, Bob, Chill and Sable go in search of Jerry, who is, of course expecting. There is a particularly funny sequence when they arrive in Oregon to collect Sable in the middle of a session with his psychiatrist. The shrink points out, ‘I think you have some fundamental trust issues to which Sable replies, ‘Yeah, I don’t trust anyone.’ At that moment they hear a noise and find the four men hiding in the cupboard.

The main body of the film is centered on this joint last-ditch effort to tag the athletic, resourceful, and well-connected Jerry. This is where first-time director Jeff Tomsic and cinematographer Larry Blandford have some fun borrowing the ‘look’ and techniques of ‘serious’ action films, for example, putting us inside the head of Jerry, as if he has programmed himself to react with strategic moves.

Just before the end credits Tomsic shows us the real thing, running home movies of the real tag game. Somehow this seems more fun, and that is because there is more strategy than just physical assault, or perhaps because the real guys have a lighthearted attitude and, when tagged, a real joy at seeing their mates.

We get a glimpse of this – minus the successful outcome – when one of the actual ploys to tag a friend appears in the film. Hoagie dresses up as a little old lady with a Zimmer frame to trap Jerry whom, he has discovered through bribery, will be collecting his tuxedo at a shopping mall. Just as Jerry appears, Hoagie drops a bag which Jerry dashes over to pick up. But Jerry is too quick to spot the weakness of Hoagie’s disguise. The humour here is derived less from the action than from the reactions of the astonished shoppers as Jerry clobbers the ‘woman’ jumping onto her Zimmer frame which is pinning down a defeated Hoagie.

After the opening set up in Bob’s company headquarters, and flying around to recruit the rest of the guys, the challenge for Tomsic is to sustain the high concept for another hour. If the first 30 minutes is a lot of fun, many viewers, may find that his long stretch of uneven battle and physical comedy will grow tiresome. There just isn’t enough humour in the physical gags and, despite attempts to vary the circumstances, it’s eventually more of the same.

But whatever you do don’t leave before the end credits in which the heads of the male cast pop up singing a surprisingly effective cover to the Crash Test Dummies, Mmm Mmm Mmm Mmm.