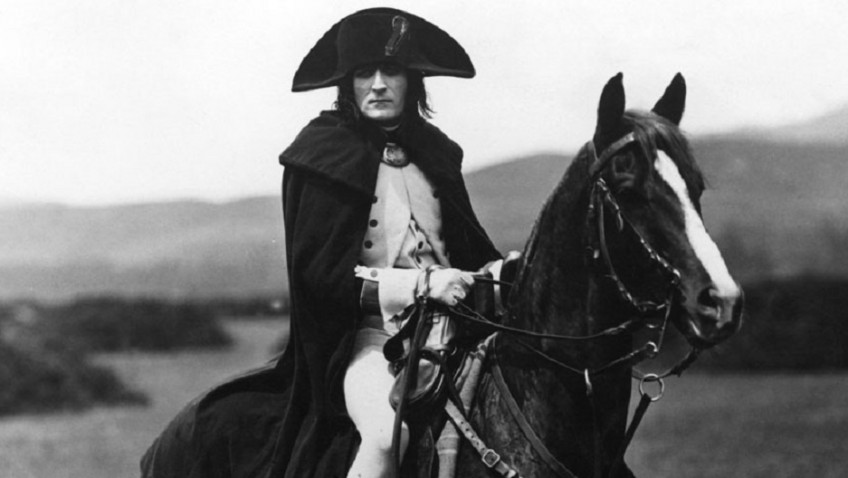 If you have never seen Abel Gance’s masterpiece, Napoléon, or saw it long ago, do not miss its limited run at the BFI Southbank and selected national venues [listed below].  A magnificent new digital print with a ravishing score by Carl Davis over the most complete version since the 1920s is the occasion for this reissue. You can also purchase the new DVD and Blu-Ray, but the big screen is Napoléon’s rightful home.

Monumental, innovative, romantic, ingeniously edited, sumptuously shot (using some real locations) and beautifully written, Napoléon is full of atmospheric battle scenes mixed with moments of romance, humour, intrigue and suspense.  Do not expect a history lesson as, despite his meticulous research, Gance had to leave out more than he included. And if you are a Brexiteer, steel yourself for Napoléon’s vision for a united Europe to be won by the sword, but to flourish in peace ‘when Europe will be one country with no frontiers.’  Do not expect a balanced appraisal, either, for what we get is a god, albeit one from the School of Hard-Love. The actor who portrays the eponymous hero is Albert Dieudonné, which is French for ‘God Given’ – and he is that to Napoléon, one of the great films of the silent era, if not of all time.

Gance directed Dieudonné in a few films in 1915-1916 before bringing him back for Napoléon in 1921.   There is a line in the film where Napoléon, a lowly artillery officer in the Siege of Toulon and attracting attention for his strategic brilliance, is summoned by the commander to provide advice on how to break the enemy’s impregnable position.  An impatient Napoléon bursts out, ‘Either I command or I stay silent,’ and proceeded to show the clueless Revolutionary Army how to win a battle.  Apparently Dieudonné gave Gance the same ultimatum about playing the title role.

Today it is hard to imagine anyone else in the role. Albert Dieudonné, was born, as was Gance (who plays Saint-Just, the psychopath of the French Revolution) in Paris in 1889 and died in Paris (as did Gance) five years before the Director, in 1976.  Thin and small in stature, with straggly long, straight black hair, a pointed nose and piercing marble eyes,  Dieudonné exudes the charisma and adopts the intense gaze that silences haughty commanders, mesmerizes crowds and frightens Josephine (Gina Manes), a society beauty whom Napoléon conquers with the determination of a Brigadier-General taking a new country.

He is a man who does not suffer fools (he snaps at a whingeing commander in Italy ‘you are a child!’); recognises the courage of soldiers (such as Louis Desaix who rejected his aristocratic background to fight and die for the Republic) and stands on principle, even at the risk of his life.  When Robespierre (Van Daele) offers to hand Napoléon to the hungry guillotine machine if he rejects the offer to head the Paris garrison, Napoléon sends him a note refusing to work for a man like Robespierre (which is rather strange as Napoléon backed the Jacobins)

Dieudonné captures Napoléon’s childhood pride, self-belief and sense of entitlement, but also his fervent patriotism for France, even when his own Corsica had opted to side with the British. Conscious that he alone had the rectitude, discipline and leadership skills (just wait until you hear his speech to the starving, barefoot Italian troops) to fill the vacuum in 1796, he stops off on his way to Italy at the empty Revolutionary Congress chamber. There he summons up the ghosts of Robespierre, Danton (Alexandre Koubitsky) and Marat (played by the renown French dramatist, poet and actor Antonin Artaud), to receive their authority.  While Dieudonné went on to write scripts and a novel and to direct a films and work in theatre, Napoléon was the role of his career, one which he had trouble shaking off.  He was buried, according to his wishes, dressed in his Napoléon costume.

Even those who find this Napoléon too vainglorious cannot but marvel at Gance’s technical prowess and at the technical innovations he used to tell the story.  This includes his famous concluding triptych when, using three projectors, the screen becomes three times wider.  One of the most remarkable sequences sees Gance merging form and function in juxtaposing Napoléon’s thrilling July 1972 escape from Corsica in a dinghy during a storm with the tumultuous congressional attendees voting to behead the monarchy. It looks as though Gance has mounted the camera on a high swing, pushing it forward and back to create the waves of people fading in and out of the symbolically dangerous sea. Then there is the sheer beauty of his shots, from Napoléon standing at night in the relentless hail contemplating the dead of Toulon lying in the mud at his feet, to the Brigadier-General dressed in white, stretched out on the floor of his room in white studying a mass of white maps of Italy.

One of the great injustices of the British Honours’ system is that Philip Green was knighted while historian, editor, film restorer, filmmaker and author Kevin Brownlow, the unsung hero of this film, has not been.  Hopefully, that injustice will be rectified.

Brownlow’s obsession with Napoléon that he borrowed from the library in 1953, has lasted a life time.  The 15-year-old was so overwhelmed by the two reels of Napoléon that he projected onto his wall at home, that he advertised for missing bits of the film; wrote to Abel Gance (who, astonishingly, not only replied, but years later, paid him a visit); got a hold of the script for editing the reels of film; and began the process of digital restoration.

While Gance only completed the first of a projected six part life of Napoléon, it runs at nearly five-and-a-half hours, excluding the three intervals.  Brownlow screened a still incomplete version at the Telluride Film Festival in 1979, introducing Gance, and his masterpiece, to a new audience and reviving Gance’s reputation. Happily, the frail 89-year-old Gance was present to watch from his hotel window.