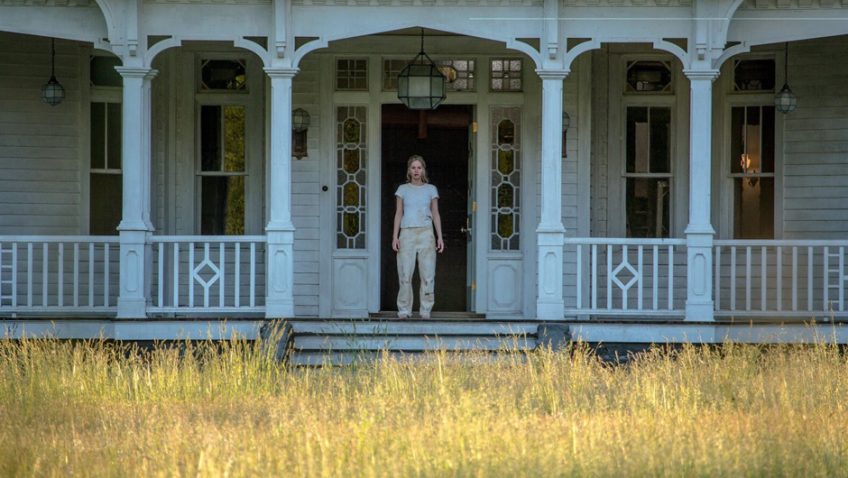 When you are up against the work of a consummate filmmaker like Darren Aronofsky, it is easy to be so seduced by his craftsmanship and the actors he commands, that you can easily overlook anything else, including the content or the concept. In the best of his work, Pi and Requiem for a Dream (which he also wrote) and The Wrestler and Black Swan (which he did not write), there are no discrepancies and he delivers perfection in the merger of form and content. In these films Aronofsky does what so few directors do – he holds nothing back, stretching the material as far as it will go, but no further, thereby leaving the audience completely satisfied with their journey. At the end of Mother! which Aronofsky produced, wrote and directed, satisfaction is what you don’t get. Aronofsky delivers an audacious spectacle bursting with unsettling emotions that do battle with a mishmash of bold allegorical concepts and genres that don’t add up. 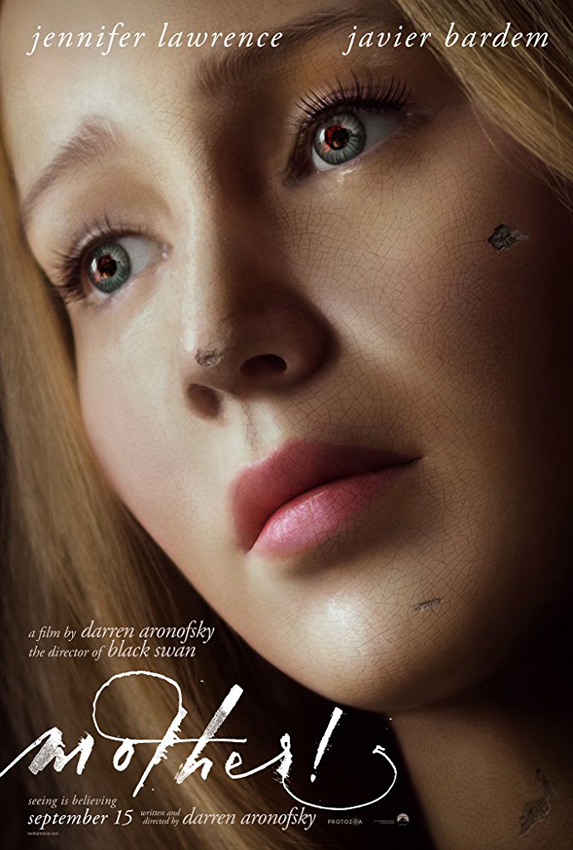 A celebrity poet (Javier Bardem) with writer’s block; a wife half his age, and a fixation with his isolated Victorian mansion – rivalled only by a preoccupation with himself – is called ‘Him’ in the credits. His new young wife (Jennifer Lawrence), who is singlehandedly refurbishing and decorating the enormous, high-spec house is called ‘mother’ – although it is not until half way through the film that she becomes pregnant. This brings to mind the odd nomenclature in the recent film ‘A Ghost Story’, which was also about a newlywed couple and a recycled, haunted house. In both cases, the lack of proper nouns suggests there is an intended universality to the film that extends to the cosmic.

While Him and mother are not exactly living in marital bliss, mother plays the happy housewife, as though refusing to accept that hero worship on her part and the need for inspiration (or a pretty home decorator) on his part, played any part in their union. Mother cheerfully kisses her husband good morning, and we cannot but notice that he half recoils. He has work to do.

But he forgets all about work when a stranger knocks on the door. The stranger identifies himself as a doctor from the teaching hospital who has mistaken the remote hexagonal mansion for a B & B. Oddly, Him welcomes the stranger in and, ignoring mother’s alarmed facial signals, assures the stranger that he can stay as long as he likes. The stranger is listed in the credits as ‘Man’ and, as played by Ed Harris, he is nothing if not mysterious, untrustworthy and creepy. Asked not to smoke, Man soon fills an ashtray despite being prone to coughing and vomiting.

When Man mistakes mother as Him’s daughter (these ‘names’ certainly are not designed for film reviews), Him explains that ‘she breathed new life into me,’ after a fire that destroyed everything – including his first wife. Him must write verses made of pure gold or have a very expensive insurance policy to rebuild and refurbish the gorgeous, spacious home. Referring to a conspicuous crystal like object on a stand in his out-of-bounds study, Him explains that could not write again until he found it in the ashes of his previous house. 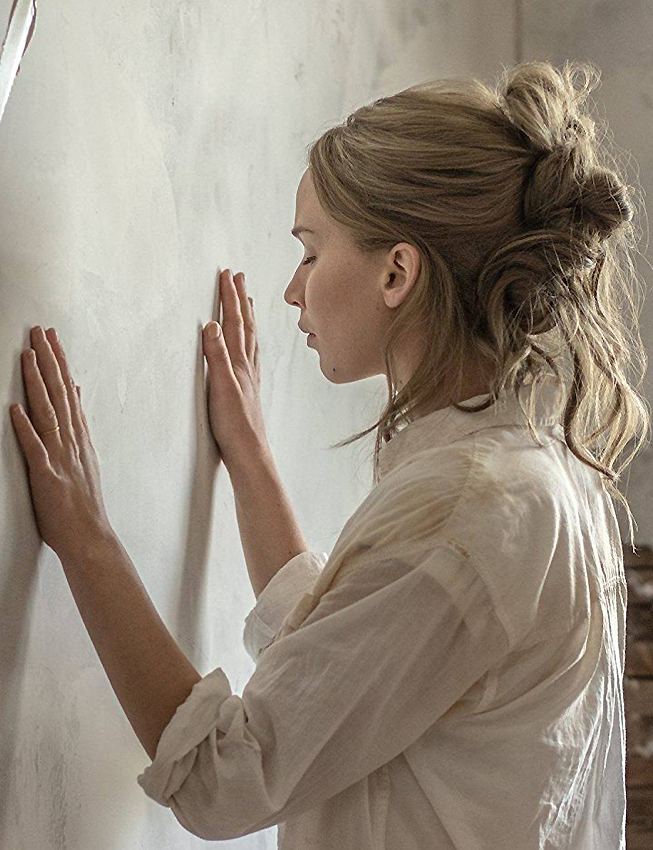 When mother learns that Man is not who he claims to be, Man makes a confession that only tightens the bond between the two men. Man is dying and before he dies he wanted to meet Him. If you believe it, it is a form of celebrity worship that we can all identify with. Instead of fearing for his privacy, Him laps up the adulation to the extent that when Man’s assertive, alcoholic wife shows up, she too is welcomed with open arms. ‘Woman’ is played by Michelle Pfeiffer, in an intense and visceral performance that makes The Witches of Eastbrook look like Mary Poppins.

Man and Woman are, of course, made for one another. When they not only trespass into the study, but break the crystal, Him is upset, but the arrival of their two sons (played by brothers Brian and Domhnall Gleeson), feuding over their father’s will gives them an excuse to overstay their welcome. The sons are busy trashing the house when, like the rivalry between Cain and Abel, the fight turns into a tragedy.

People with erotomania delude themselves into believing that a complete stranger – usually a celebrity – loves them and they feel a persistent need to contact or see the object of their fixation. They are usually called stalkers, but in Mother! they become parasites that devour everything to get their fill. But what about an adoring young muse so easily seduced by a celebrity poet? Is she a kind of stalker or a victim?

The first half of Mother! appears to be an allegory about the unhealthy, symbiotic relationship between the adorer (parasite, worshipper, stalker) and the adored – in this case a man with a massive ego. The allegory plays out in a ‘home invasion movie’ genre, like Funny Games, complicated by a haunted house subplot with oddly shaped bloody holes in the floor boards that lead to mysterious zones. So you might wonder where the second half has to go. The answer is nowhere.

But what we could not really foresee was the film becoming a misogynistic cross between Rosemary’s Baby and the Exorcist, yes, complete with hysterical hordes, pagan sacrifice and religious imagery.

However, Aronofsky’s insertion of ‘the mother’s prayer’ on every film critic’s seat might suggest that the house is the earth and the home invasion is man’s destructive relationship with Mother Earth – a planet that cannot sustain all manner of greed and excess. Aronofsky, a committed environmentalist, sits on the Board of the Sierra Club whose mission is ‘to practice and promote the responsible use of the earth’s ecosystems and resources.’

It is far more tempting, though, to see in the film a case of life, in its cyclical nature, imitating art.The 48-year-old director is just 2 ½ weeks older than his 48-year co-star, Javier Bardem. And in real life it is Aronofsky, who has a child with former fiancée Rachel Weisz, who is now dating the 27-year-old star – Jennifer Lawrence.