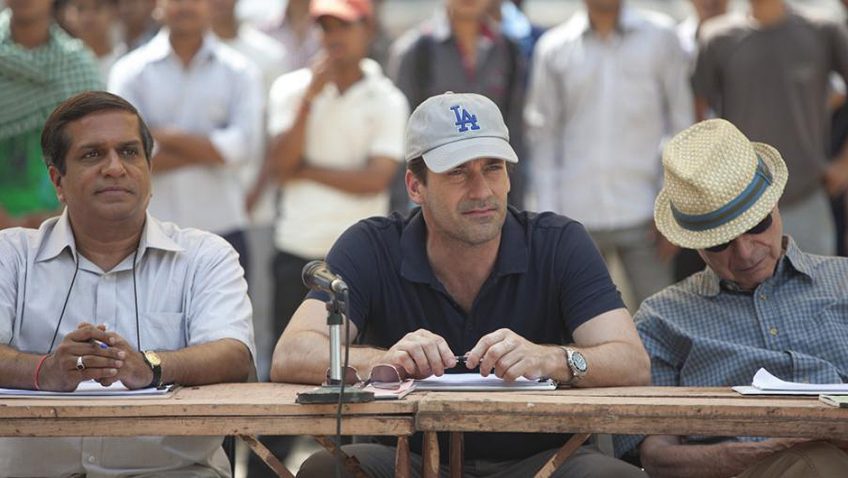 A winning underdog in The Million Dollar Arm

Producers and writers are so adept at creating fictional stories and plots that conform to the expectations of mass global audiences that when a true story comes along that fits into these pre-set moulds, it often seems too good to be true. Million Dollar Arm

is one of those true stories. The film is an entertaining, underdog-makes-good sports comedy/drama that is well written by the brilliant Tom McCarthy (Up, The Visitor, The Station Agent) and is surprisingly close to the true events. Nonetheless, you might find it hard to believe that Craig Gillespie’s film isn’t just another Disney fantasy.

American sports agent J.B. Bernstein (Jon Hamm) and his partner Ash Vasudevan (Aasif Mandvi) have one famous, but famously disloyal client left and he has just decamped. Serious financial worries set in for Ash, who, unlike Bernstein, has a family to feed.

While flipping the T.V. channels between Britain’s Got Talent and a cricket game, Bernstein has his eureka moment. Aware that an Asian businessman, Mr Chang (Tzi Ma), is targeting opportunities to invest in athletics, he dreams up an India’s Got Talent with a big twist. In addition to upfront prize money, he envisages a nation-wide televised competition that will give India’s best cricket players a chance to land a lucrative baseball contract. Mr Chang buys into Bernstein’s pitch and Bernstein is off to India.

Organising a national competition in India proves to be a major challenge and not only because the thousands of candidates they see are incapable of pitching a baseball above 75mph. A diminutive baseball fanatic named Amit Rohan (Pitobash Tripathy) becomes Bernstein’s bilingual dogsbody, proving so invaluable that he accompanies the two eventual winners to Los Angeles and becomes a winner himself.

The most amusing addition to the cast, however, is 80-year-old Alan Arkin as Ray Poitevint, the curt, no-nonsense, narcoleptic sports scout who wakes up when he hears a fast ball. Arkin is very funny. Rinku Singh (Suraj Sharma), a lorry-driver’s son who never played cricket, wins the competition with a fastball of 89mph. Ray wakes up for that! Dinesh Patel (Madhur Mittal) is runner-up. 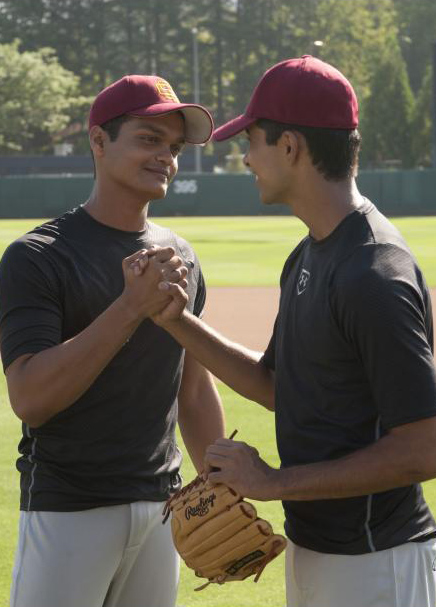 The third and longest part of the film takes us back to L.A. where Singh and Patel struggle to master the skills in the short time allotted. On a lighter note, the two trainee-pitchers are fish-out-of-water when it comes to adapting to modern life in Los Angeles. They have never seen a lift, mobile phone, flat screen television or meat on the menu. This, too, is apparently true.

Pitching coach Tom House, the real coach, portrayed by Bill Paxton, argues with Bernstein that the two men are not ready for the try-outs. Bernstein knows it, too. But Mr Chang will not change the time-table and the young men must pitch before the nation’s top sports’ critics and their cameras.

In a film that tries hard to please everyone, and generally succeeds, romance is also on hand. Brenda Paauwe-Navori (Lake Bell), a doctor who rents a bungalow from Bernstein, provides a woman’s touch. She also dispatches good advice to the young men and to Bernstein, her handsome playboy landlord. In real-life, Brenda is not a doctor, and was a neighbour, not a tenant, but the rest is true enough.

There are two significant changes to the story. Bernstein did not come up with the idea of a competition and Ash was not his partner. The idea came from Will Chang who worked with Ash in venture capital and Bernstein developed the idea with them. But a theme of the film is personal growth, and Bernstein becomes a better, less selfish and more caring person as a result of meeting Brenda, and of his mentoring relationship with the two Indian pitchers.

Despite the feel-good factor, there is an undercurrent of exploitation to the film that you might pick up on. What the film does not tell us is that both pitchers were signed by a minor league team associated with the Pittsburgh Pirates and never made it to the Major League where the money and status is. Patel was dropped from the team after 2 years and returned to India – a bit of failure who has to return from newfound luxury to poverty and low prospects. The competition soldiered on making money for the organisers and advertisers. The film should do well, too, particularly among Jon Hamm fans and the Indian population the world over.