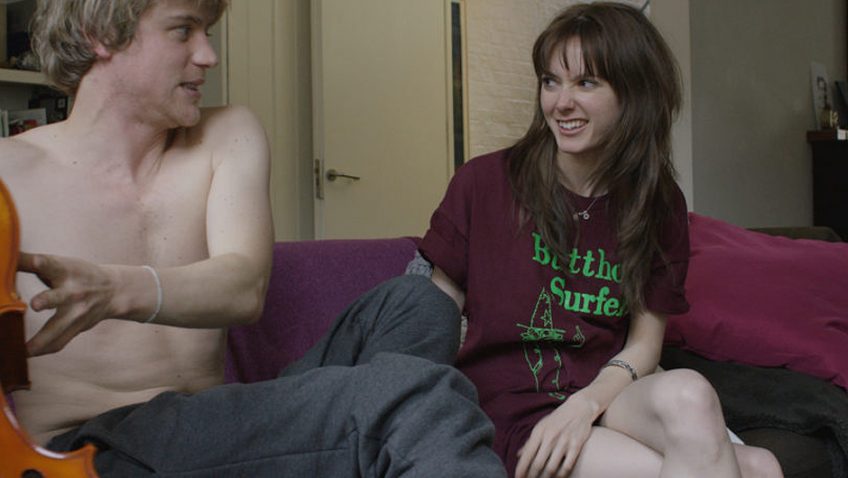 A love story thick with stereotypes and clichés

Love Is Thicker Than Water

is apparently meant to be another modern day Romeo & Juliet story, but there is no real opposition to the marriage of the young lovers. Vida Berliner (Lydia Wilson) and Arthur Davis (Johnny Flynn) come from very different backgrounds, however, and the film purports to show how different backgrounds can affect the most loving relationships. Fair enough, except these differences take the form of regular, trickle of stereotypes that slow drip their way through a meandering, dull narrative.

Writer and co-director Dutch Ate de Jong (All Men are Mortal, Drop Dead Fred) and American co-director Emily Harris (who makes films for the V & A) cite Robert Altman, John Cassavetes ‘Faces’, Mike Leigh’s Secrets and Lies and Richard Linklater’s masterpieces, the ‘Before’ trilogy as inspirations for their style and the preponderance of close-ups but any similarities are not instantly apparent.

Pretty, petite London aspiring musician Vida (Wilson) meets Arthur (Flynn), a bike courier and aspiring photographer/computer animator (segments of the film are animated) meet and cannot take their hands off one another. They giggle, play games and make love. The basis of their relationship seems to be physical, but in the absence of any meaningful conversations, it’s hard to tell. In any event, they soon move into Vida’s lovely flat and argue about whether to keep the peanut butter in the fridge or in the cupboard.

But before they get married they have to meet the future in-laws. Vida’s dad, Levi (Henri Goodman) with whom she is very close, is a doctor who apparently makes a lot of money. His wife Ethel (Juliet Stevenson) is a divorce lawyer who gave up her dream of being a composer when she had her three kids. Levi is so grateful he ignores the fact that she is having an affair.

What’s more, there is something about Vida’s grandmother being a famous violinist and Holocaust survivor who was forced to play in the concentration camp. The mind wanders to Alma Rosé, the celebrated Viennese Jewish violinist who was forced to direct the Girl’s Orchestra in Auschwitz – except that Alma did not survive.

When it’s Vida’s turn to visit Arthur’s family in Port Talbot, Wales, the clichés come rushing in on both sides. When Arthur’s cheery mother, Sara (Sharon Morgan) offers Vida a cuppa, Vida makes a point of requesting herbal tea. Herbal what? This is Port Talbot, Ms, not Hampstead. Then Vida is forced to eat fish and chips for lunch because that’s the staple in the diet of all depressed Welsh towns.

Al Weaver, Ellie Kendrick and Lydia Wilson in Love is Thicker than Water

Arthur’s dad, George (Robert Blythe), is a retired steel worker, of course, and has taken to staring out the window since his oldest son died. Just to let you know, we do not learn the whole truth about the son or about Ethel’s lover until these bombshells are added to the drip feed as though they were inconsequential details. Arthur’s younger sister (Remy Beasley) is (of course) a cleaning lady and his older sister (Jessica Gunning) is happily married to an alcoholic. You get the drift?

As life expectancy in former Welsh steel towns is lower than it is in middle class, Jewish families in London no one is surprised when George suddenly dies. The big surprise is that Ethel (who is in her fifties and looks very healthy) dies, too – and just a few hours before George on the exact same day. Characters over 50 are regularly killed off for plot points in movies, but this might be the only one when two are suddenly killed off on the same day.

Vida and Arthur argue, not about peanut butter, but life choices. It is not apparent why they are arguing but it seems that each is upset about the loss of a parent, or perhaps the pressure of adding in-laws to their own dysfunctional families is getting to them. Arthur decides that it’s only right for him to give up his dreams and stay in Port Talbot with his widowed mum in a dead-end job. Vida is furious.

No sooner do you think the film might be ending when another secret emerges. All of a sudden, for instance, Vida’s brother (Al Weaver), a newly qualified psychiatrist, comes out of the closet and picks a fight with Arthur’s mixed-race, macho half brother (Alex Lanipekun) whom he accuses of being homophobic. This film covers all the bases, but more for the sake of it than for any real purpose.

And in case you think that de Jong and Harris have left out the part where the poor steel worker’s son turns out to be an artist genius, we learn that Vida –without Arthur’s knowledge – has submitted an application for Arthur to study at the Royal College of Art. Just how she managed to do that is anybody’s guess. But it’s proof, if proof were needed, that love is thicker than water.