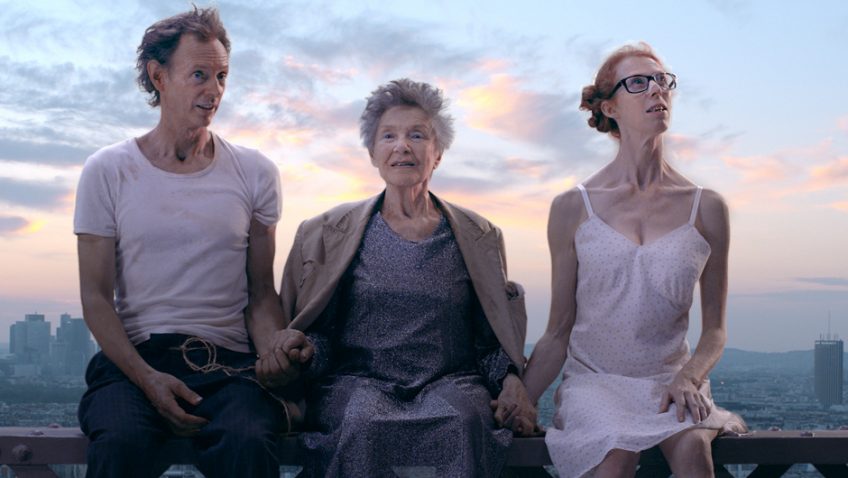 Dominique Abel, a Belgium clown who might be made of rubber; and tall, skinny Canadian red-head Fiona Gordon who might also be have been a comic-duo making burlesque theatre and films together for 25 years. If you have not seen their feature films, Iceberg (2005), Rumba (2008) or The Fairy (2014), then do not miss this chance to get Lost in Paris. Their whimsical style is melded with a timeless, if rarely seen burlesque, and Abel and Gordon are masters in the field. When they find one another in Paris a treat is in store, enhanced by a sparkling, spunky performance by 88-year-old Emmanuelle Riva (first seen in Hiroshima, Mon Amour; last seen in Michael Haneke’s Academy Award winning film, Amour, who passed away, age 89, in January of this year. Fiona, a tall and lanky, middle-aged librarian (Gordon) leaves her snowbound village in Canada after receiving a letter from her aunt Martha (Riva). Martha is a kindred spirit who, unlike her favourite niece, acted on her impulses and moved to Paris when she was young. The letter informs Fiona that after many decades in the French capital, ‘I still love Paris. But they want me to go to an old person’s home. Ridiculous! I’m only 88!’’

For less adventurous Fiona, this is the chance of a lifetime and, with scant preparation, off she goes in a short sleeved green top and body-hugging green pencil skirt with a huge red rucksack on her back, topped by the Canadian flag. While most of Canada is colder and snowier than Paris, the two countries still have winter at the same time, making Fiona’s attire – often wet from and unintentional dips in the Seine – a conundrum. This isn’t a continuity error, but an example of the artistic and dramatic licence Abel and Gordon take to show off the lightheartedness and physical comedy at the heart of their art. Paris in springtime is romantic, while it’s easier to climb the Eiffel Tower if you’re not encumbered by a heavy winter coat.

If the weather change does not bother Abel and Gordon neither do coincidences. On the underground Fiona meets a polite, helpful Canadian Mountie on an exchange programme in Paris. ‘I’m, Canadian, too,’ Fiona beams at the good looking, respectable man. ‘I can see that,’ he smiles, referring to the flag on her rucksack. The Royal Mounted Police rooky reappears, as characters, items and locations have a way of doing here. Dominique Abel and Fiona Gordon in Lost in Paris

After the Canadians part ways, a series of calamities befall Fiona when she finds that her aunt is not at home. She takes advantage of the fine weather and free time to wander around Paris and, posing for a photo, falls into the Seine. The hapless jogger who was taking the photo tries to return it, but ends up dumping it in the bin. Don’t worry – it will be found just in the nick of time later on in the film.

The red rucksack is found floating in the Seine by Dom (Abel), a resourceful hobo who lives in a tent on the L’Ile aux Cynes (the Isle of Swans), a small, artificial island built in 1927 to support one of the many bridges in the area. Nearby is the Eiffel Tower. Dom is delighted to find clothes he can wear (he is as thin and malleable as Fiona) and even happier when he finds currency. Fiona Gordon in Lost in Paris

Returning to a restaurant on a péniche in the Seine where earlier he hunted for scraps in the bins, he is denied entry until he produces a 100 Euro note. The maître d’ gives him a tie and a bad table for one under the loud speaker whose pulsating music by the Gotan Project causes all the diners to bounce in their seats. Dom wants to dance. Rejected by all the female diners, he spots a woman slumped over a table in the corner. It’s Fiona who, after losing her belongings and unable to reach Martha, has gone to the police and obtained a meal voucher.

Fiona, a red-headed Olive Olyside (the green outfit doing nothing to dispel this image), engages in a tango with Dom and begins to fall for him. She accepts that his yellow jumper is an uncanny coincidence. Fiona speaks to Dom in her limited French, while Dom seems to understand English and speak a little. As with Jacques Tati, most of the communication is physical, so there are few subtitles.

Elated by the positive response from Fiona, Dom orders three bottles of Champagne with Fiona’s money and they leave the restaurant on a high. When it becomes apparent that this dancing man has stolen her belongings, however, things turn sour.

Meanwhile, the reason that Martha keeps missing Fiona is that she is dodging the woman from the nursing home which has already claimed her male friend, a still dashing actor named Norman (the celebrated actor Pierre Richard). They meet at Père Lachaise cemetery where they have both gone to pay respects to a mutual friend, and flirt on a bench among the grave stones with a charming foot dance.

Pierre Richard and Emmanuelle Riva in Lost in Paris

With Martha now living rough for fear of being evicted, it is not long before she meets – and shares a tent with – Dom. And then the mobile phone rings.

The themes of loss, independence and vulnerability are given a buoyant gloss in this tale of three lonely, vulnerable people fighting to keep their independence in an urban metropolis. Fiona loses her material belongings and gradually her inhibitions; Martha hangs onto her independence along with her youthful spirit; while Dom – selfish and self-centred – has lost his moral compass and a permanent home, but retains his elegant flair.

Dom who treats a stray dog to roast beef when in the money might not be irredeemable, yet it is far from apparent whether this man, who incidentally unites niece and aunt, is capable of empathy. With his track record as a cad and thief, and an insensitive and unbefitting invented eulogy at Martha’s funeral (fortunately, it proves to be the wrong Martha), early signs are not promising.

This clownish vision of the world is easier to swallow in Paris, but since none of the characters act in a psychologically convincing manner, you have to give yourself over to the burlesque. Abel and Gordon recognise the challenge, which ‘consists of pulling the spectator into a world where fantasy is not only possible, it is wonderful.’ Mission accomplished.