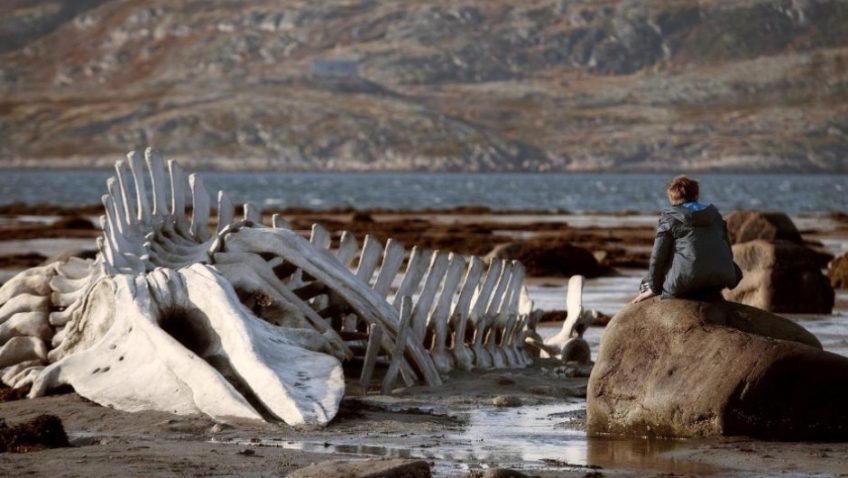 It is not surprising that Andrey Zvyagintsev’s latest film, Leviathan

was voted Best Film at the London Film Festival. Though winning the Best Screenplay award at this year’s Cannes Film Festival, Zvyagintsev’s fourth feature probably missed out on the Best Film by a hair to Winter Sleep; another family saga that is only slightly less bleak in its setting and outlook.

is an intense and visceral experience that will not be easily forgotten. Here is a fearless tour de force in filmmaking: an ordinary man’s epic battle for justice that is biblical in nature, reminding us that this searing political indictment of a corrupt and morally bankrupt Russian state is inspired in part by Hobbes’ political treatise on state control, Leviathan

. And, of course, Hobbes’ treatise refers to the Book of Job. The film is also inspired by Heinrich von Kleist’s Michael Kohlhaas, the true story of an honest, hardworking man who pays the price for taking on the state to see justice done.

Nikolay (Aleksey Serebryakov) called Kolya, is a modern day Job. He lives in a sprawling wooden house that his family built with their own hands, overlooking the Barents Sea. Kolya’s son from his first wife has an uneasy relationship with his father’s second wife, Lilya (Elena Lyadova seen in Zvyagintsev’s Elena), an attractive, younger woman who works in a local fish cleaning factory.

A sporadically-employed mechanic by trade, Kolya reluctantly fixes the vehicles of a police officer free of charge, and fills his time drinking and intensifying his hatred for the town’s mayor, Vadim (Roman Madyanov). Vadim, a nasty, fat bureaucrat and bullying binge drinker, has slapped Kolya’s property with a compulsory purchase order, with the price well below market value. Kolya suspects that the mayor wants the land for himself.

Kolya is in no position to fight this battle with a political leviathan by himself, and a local priest advises him not to try. He helpfully quotes from the book of Job, ‘Canst thou draw out Leviathan with a fish hook?’ Kolya is going to try.

His one hope is Dimitry, or Dima, (Vladimir Vdovitchenkov), a suave, self-possessed lawyer from Moscow who is savvy enough to arrive armed with a dossier of Vadim’s past transgressions. After a judge reads out the arguments and judgement in a comical emotionless drone at breakneck speed, Dima resorts to his blackmail. The lawyer is also constantly reining in his hot-tempered friend/client, hoping for a negotiated settlement of a fair price. Unfortunately Dima’s self-control in court does not extend to his sex life and he and a frustrated Lilya end up in the sack.

While we might question Hobbes’ argument that man’s natural state is war of ‘every man against every man’, we see from both Kolya’s and Vadim’s revenge on Dima that he does have a point. But what social contract is this that allows for Vadim’s outright theft in the name of the state whose purpose is to achieve civil peace and social unity?

The film is not without its humour that comes through in several scenes like a chemical release necessary to keep the film and characters from over-heating and erupting before the finale. In one scene Kolya attends a hunting party where, instead of birds or cans, portraits of former party leaders are used as targets. We notice the portrait of Putin hanging behind Vadim’s office desk and recall the shooters refraining from shooting politicians without ‘historical perspective.’ In short, give them time to hang themselves.

The superb acting and the dazzling cinematography by Zvyagintsev’s regular cinematographer, Mikhail Krichman enhances the drama and draws you in, guaranteeing to stir up your emotions and empathy. Krichman treats us to what has to be the best sequence of shots of any film the new millennium. It is a dialogue-free scene that serves as a visual metaphor for a man’s life, and everything he holds dear, being literally swept away.

Born in Siberia in 1964, Writer/Director Andrey Zvyagintsev has, from his debut in 2003, The Return, attracted attention – and international awards – with his strong, bleak dramas about the difficulty of contemporary life in the former Soviet Union. Leviathan

is Zvyagintsev’s most ambitious and politically targeted film, and feels even more relevant as we watch it against the background of Putin’s invasion of the Ukraine and suppression of journalism and freedom of speech.

can be faulted, it is because, at one point, Zvyagintsev’s characteristic subtly fails him. A loved one’s melodramatic death might not be a punishment too far for our Russian Job, but the consequences are. Zvyagintsev also hammers home his point about the corrupt mayor and Church in a prolonged – and at this point, redundant – epilogue that dilutes its powerful climax.