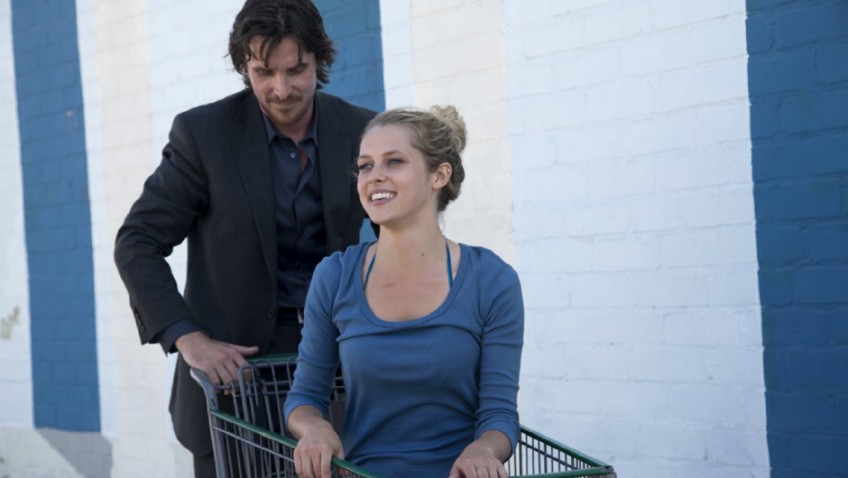 Knight of Cups is Terrence Malick’s first film set in the freeway city of Los Angeles and he makes the most of it.  Captured on film by Malick’s regular, and double- Academy Award winning cinematographer, Emmanuel Lubezki (The Revenant, Birdman, To the Wonder), the film leaves you staring at the screen in a kind of ecstatic delirium.  And that’s just as well, as despite a star- studded cast that befits the glamorous milieu, not much of interest is happening below the constantly arresting visual surface. The title, like seven of the eight ‘chapters’ into which the film is divided, is taken from a pack of tarot cards; and sure enough, successful, but unfulfilled, screenwriter Rick (Christian Bale) visits a fortune teller to find out where he’s going.  Based loosely on The Pilgrim’s Progress, Suhrawardi’s A Tale of Western Exile, Plato and other texts that never appeared on the A-Level curriculum, the film is full of statements that sound profound  –‘How do I begin?’ Which Way Shall I Go?’ – unless you find yourself driving on, or looking down upon an L.A. freeway as often as Rick.

Malick is inviting us to consider other films when he makes his troubled Knight a successful, existentialist scriptwriter in Tinsel Town.  In the film’s portrayal of celebrity ennui, Malick is closer to Sophia Coppola’s Somewhere than to the Coen Brothers’ Barton Fink, but Bale is never very convincing.  We have to accept what we are told as Malick gives us so little on which to base an emotional connection.

Malick’s technique of overlaying interior monologues and conversations that are expository and oddly artificial makes it difficult to feel any compassion for Rick let alone care about what happens to him.  Despite the explosive conversations between Rick and his black-sheep brother and between Rick and his estranged father (Brian Dennehy), these scenes are curiously non dramatic and leave us cold. On several other levels, though, the film’s parallels with Fellini’s La Dolce Vita are striking.  La Dolce Vita also has a loose eight, or possibly nine-part structure, though distinguished by episodes and not by the specific titles of Knight of Cups.  In La Dolce Vita, an increasingly disillusioned celebrity reporter seeks to emulate a respected scholar he meets by writing a book.   Does Rick feel that he is demeaning himself by writing scripts instead of the Great American Novel? In both films, the protagonist is a tall, dark and handsome writer of around 40 who goes through women like babies go through nappies.  It is as though their ability to conquer gorgeous women is a validation of their worth.  The women in both films have superficial identities and no dimensionality, although they are anonymous. It is only the emptiness of their society that comes across. Rick’s former wife Nancy (Cate Blanchett) and final lover (Natalie Portman), a married woman, cannot satisfy a man as restless as Rick, who is, moreover, currently hung up on his two brothers, one suicidal failure, the other already a suicide victim. Perhaps it is in keeping with the film’s critique of LA culture that the characters do not speak to one another, and all the obscure dialogue is in the form of voice-over with characters speaking to themselves much of the time.  This technique was used in Malick’s previous film, To the Wonder and was equally maddening in that film.  Malick also repeats the ‘Elvira Madigan’ romantic montages of To the Wonder, with, here, Rick and his lady friends cavorting on the beach at Sunset. It is difficult to explain why such a director with such brilliant mind and one so full of cinematic inventiveness, would resort to these clichéd purple passages.

As though Los Angeles were sufficient for a moral critique, Malick takes Rick to Las Vegas — that Sodom and Gomorrah in the desert for more soul searching and casual sex (which we never see on screen). While Lubezki takes advantage of the neon lights, pole dancers and showgirls join the bored, wealthy woman in Los Angeles in throwing themselves at Rick, even though he’s a self-obsessed, depressed womanizer.  With the exception of Nancy, all of the women in the film have perfect faces and bodies, and all are demeaned Jezebels. They are so unreal that you begin to wonder if they could all be figments of Rick’s imagination

Like Rick’s life, Knight of Cups borders on the pretentious, the self- indulgent and the tedious.  It is continually pulled back from the brink by Lubezki’s breathtaking cinematography, which somehow conveys more meaning than does the allusion to The Hymn of the Pearl and all the theological references combined.