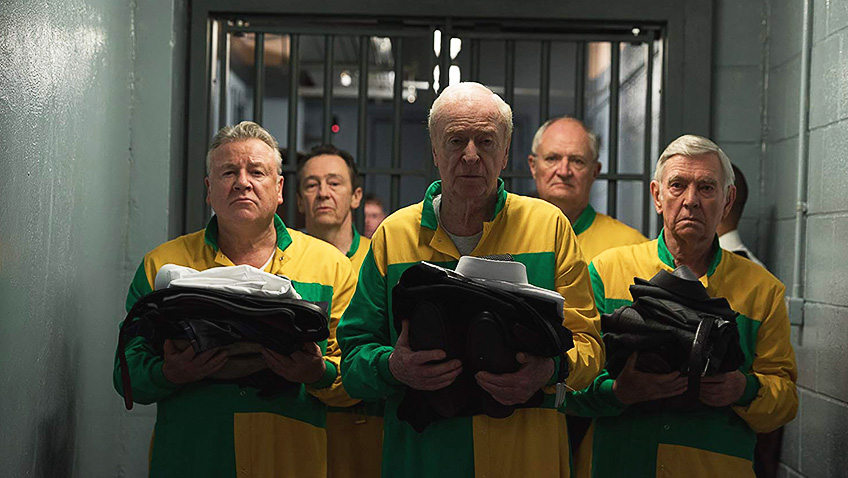 From the writing (Joe Penhall, The Last King of Scotland) and directing (James Marsh, The Theory of Everything) talent behind King of Thieves

and a cast of some of the greatest comic and dramatic British actors of the last 50 years, you would expect the film to open the London Film Festival and to be a shoe-in for BAFTA glory. But though it’s light years ahead of The Hatton Garden Job this true story of the so-called ‘crime of the century’ has its limitations.

Marsh, who made one of the all-time great documentaries, Man on Wire, likened his biographical account of Philippe Petit’s 1974 hire-wire walk between the World Trade Center towers to a heist movie. He captured, with all the tension of a thriller, Petit and his team’s meticulous planning and preparation; their illegal entry and trespassing and then the illegal, but super-human stunt. The title is taken from a police report: ‘Man on Wire’, for Petit was arrested.

The playwright and scriptwriter Joe Penhall’s second play, Pale Horse, starred Ray Winstone, who plays Danny Jones in this film. Penhall also wrote the great BBC crime drama series, The Long Firm starring Mark Strong. So both the team are well suited to adapting a true story, and to the criminal milieu of the characters.

Penhall hurries through the tedious preparation and even the rather tedious heist itself, the details of which are well known to anyone who was around in April 2015 with interest in the news. He focuses instead on the aftermath of the heist, the personalities of the participants and the relationships between these career thieves.

But first there is the film’s love scene. Brian Reader 77 (Michael Caine, 85) is having dinner with his wife (Francesca Annis) who is dying of cancer. She tells her husband, who has a criminal record and a beautiful home, ‘I want you to stay out of trouble.’ But at the funeral the temptation is already there to talk shop with his old partners in crime. ‘Nothing prepares you for the silence of an empty house’, Brian moans as though convincing himself a distraction is just what the doctor ordered.

A prologue has told us that there were so many burglaries of the individual shops in Hatton Garden that they installed a communal underground vault that is deemed impregnable. Brian, a retired criminal strategist who is bored without a challenge, has been thinking about that for some time. ‘I haven’t been to Hatton Garden in 25 years; since the glory days’ he muses.

Brian gathers a team of old pros in their 60s and 70s comprising an unbalanced and devious Terry Perkins (Jim Broadbent, 69); hard of hearing, two-faced John ‘Kenny’ Collins; explosive swindler Danny Jones (Ray Winstone, 61) and Carl Wood (Paul Whitehouse, 60), who is happier in his allotment. They are lacking someone up to speed in electronics to neutralise the modern alarms. Brian knows 30-something Basil (Charlie Cox) who tells Brian that that he has a proper job in fiber optics. Brian looks surprised; ‘Don’t tell me you’ve gone straight?’

Not only hasn’t Basil gone straight, but he knows someone who works at Hatton Garden who has a key. Brian gives Basil a little lesson in choosing diamonds, and, when Brian gets cold feet when a faulty lever causes them to abort and then return the following day, he makes a deal with Basil. He will tell Basil the most lucrative safe deposit box numbers in exchange for 50%. Brian is also unhappy – as are Terry and Danny – that Kenny has brought in his brother-in-law, Bill Lincoln (Michael Gambon, 77), but they needed an nondescript trade vehicle to transport the heavy valuables, and Bill has a fish van. He is nicknamed ‘the fish’ for obvious reasons, but Bill, an alcoholic, also looks permanently sloshed.

By the time the police are at the scene and the media have gathered around the door to the vault, the criminals have ample time to get away, but only one actually does. Oddly enough it is the final third of the film, the aftermath, that is the most fun and revealing. We watch the bickering and immaturity of the men consume them and undermine their efforts as they as such easy targets for the detectives. When Danny and Terry decide to send Basil packing with £80K in cash after he questions the division of the spoils, Basil travels to Margate where Brian is lying low.

What is so remarkable is how blind the men are to the police, although the latter’s crime detection techniques are not that technologically advanced. Once they trace the licence plate used in the exploratory phase of the crime, it is not rocket science to link together the car owner with past crimes and his habitual fellow criminals. Their phones are all bugged but the men seem unaware. When a furious Brian invites the team to dinner to ensure he gets his cut, he actually tells one of the team to stop looking at the waitress with the biro. Not even he suspects that half the staff are undercover officers.

It was estimated at the time that up to £400 million in jewels, gold and currency went missing. Whatever the amount, only £4 million was reclaimed. At one point we see a bit of Hebrew writing on a small white envelope, reminding us there is a human face to each loss – and the historic Hatton Garden is now all but destroyed.

The lack of tension in the film is not entirely due to the fact that most of us know how it ends. After all, many knew how Petit’s vertigo-inducing tightrope walk would end, too, but you are still sweating. It is partly because there is no one to root. Such is the filmmakers’ refusal to romanticise these characters, that you actually want them to get caught.

One of the most refreshing aspects of the film is precisely how unlikeable the men are. Reader, who lives alone in a huge million pound plus villa, was even implicated in the murder of a police officer. We see them warts and all and it’s not a pretty sight. But in the final scene when the men are discussing their ages (‘no one thinks they’re old; not even old people’) and dressing for their trial, a wonderful sequence flashes on the screen of these men as actors: the actors we have grown up with in their, and in our, younger days.