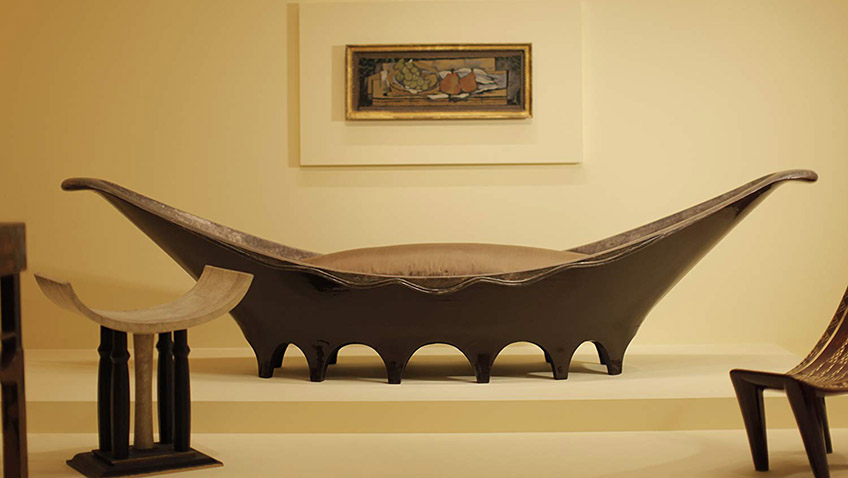 In 2009, a small, brown leather armchair once owned by Yves St Laurent was auctioned for 19.5 million Euros – vastly exceeding the guide price and breaking all international records for a similar item. While we think nothing of a work by Picasso going for that amount today, the name of the artist who designed this chair is anything but a household name. Two films about Eileen Gray, the designer of the chair, are released this week, and both open with this famous auction. Gray Matters

is a documentary by Marco Antonio Orsini, while Director Mary McGuckian’s The Price of Desire is a dramatisation of the controversy surrounding Gray’s famous house E-1027, ‘vandalised,’ by Le Corbusier.

After being evacuated from her beloved white cuboid holiday home near Monaco, E-1027 by the German invasion, – the German’s reportedly used the house walls for target practice – Eileen Gray’s reputation faded. Her ashes were interred in an unmarked plot in Père Lachaise cemetery, Paris. If producer/ writer/director Marco Orsini’s documentary about the life and art of this talented architect contributes toward reversing this neglect, it will have fulfilled its purpose.

The sale of Gray’s ‘Dragons’ chair, and a 2015 biography by Dr Jennifer Goff ‘Eileen Gray: Her Work and Her World

‘ were key events in the rediscovery of an artist who was marginalised even in her lifetime. Even more important was the huge exhibition in 2013 at the Pompidou Centre in Paris and a retrospective in Dublin. Gray Matters

provides a workmanlike overview of the artist’s life and art, while making a convincing case that Gray does matter.

Born to an Anglo-Irish aristocratic mother and a painter father in County Wexford, Gray studied in Paris and indulged in bi-sexual relationships, as one did. Settling in Paris definitively in 1906, she put herself under the tutelage of Seizo Sugawara, who was in Paris to restore the lacquer pieces from Japan’s stand at the 1900 Exposition Universelle. She soon became Sugawara’s employer, and the Tout Paris queued to order her furniture that married tomorrow’s design with the ancient, mystical art of lacquer. The first artist to successfully produce the colour blue in lacquer, Gray also managed a rug weaving company and opened a shop near the Élysée Palace.

Gray’s relationship with Le Corbusier, and a far less talented Romanian architect, Jean Badovici, is well documented in the film, as is the controversy surrounding the famous minimalist house E-1027 on the Riviera at Roquebrune-Cap-Martin. Gray designed at least part of the modernist house (and all the furniture) for Badovici, her lover, but was never credited. And when Badovici allowed his friend Le Corbusier to paint colourful murals on her white walls, Gray began to retreat from the world.

This famous schism is amongst the most curious incidents in architectural history. Gray registered the house in Badovici’s name and said it was a gift to him. When he died intestate, she struggled to claim it back. After Le Corbusier painted the jarring frescoes and built a cramped wooden house next door, people assumed that he had designed E-1027 and he was not one to deny any positive attribution. When Le Corbusier died in the sea near E-1027, and was buried in a grave he had designed in Cap Martin, his relationship with Gray’s house took on mythical proportions.

Marco Orsini’s documentary offers some never before seen footage of Gray’s furniture and the house, while a discreet narrator and an impressive group of expert ‘talking heads’ supply the narrative. They tell a fascinating story, but not always as clearly or insightful as one could wish. While the camera work does not always show Gray’s pieces in their best light, we are treated to a wide range of her most iconic designs, including: The Black Brick Screen, the De Stijl Table, the Bibendum and Transat chairs and more. Always ahead of her time, Gray was working on a celluloid screen when she died at the age of 98, having outlived Badovici and Le Corbusier.