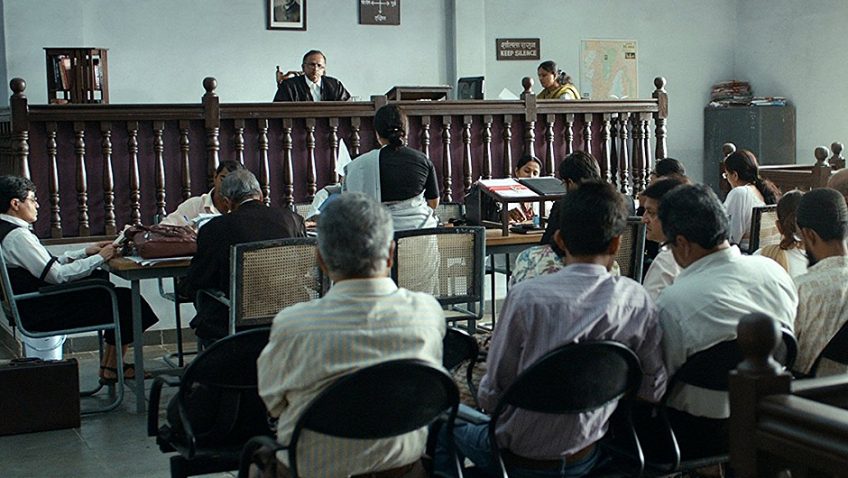 Courtroom drama with a difference in this remarkable Indian film

From Anatomy of a Murder, Witness for the Prosecution, Judgment at Nuremberg and Inherit the Wind to To Kill a Mockingbird, 12 Angry Men, Erin Brockovich and Jagged Edge, the courtroom drama has been a popular staple of American cinema.  Now, in his remarkable feature film debut, Court, Indian Writer/Director Chaitanya Tamhane gives us a courtroom drama with a difference. What is conspicuously absent in Court is the high drama and the message-imparting sermonising that are the hallmarks of the genre as we know it. The title, without the definite article, suggests that the case we focus on is not unusual, and what we experience is the court system that any ordinary Indian defendant faces.  Tamhane takes us inside a suburban Mumbai court that looks something like our A & E Departments on a Saturday night, with rows of bedraggled souls languishing for indefinite periods of time, ever hopeful that their pain will soon end.

One such soul is Narayan Kamble, a 65-yer-old folk singer whom we first see teaching young students in a poor section of Mumbai and telling them to do their homework.  He eventually ends up on a makeshift stage where he performs a combination of rap and folk music before a quiet, but appreciative crowd. His songs are clearly rants against generic social ills but appear harmless to us.   Kamble apparently makes no money from his performances, but he is branded a dissident and arrested, not for the first time.

This time, however, the charges are very serious.  Unbeknown to Kamble, a sewage worker has committed suicide near the site of one of Kamble’s gigs. Kamble is charged with inciting the suicide with seditious lyrics, specifically recommending suicide.

A defence councillor (Vivek Gomber) is appointed and, as bail is denied, he attempts to exonerate the hapless Kamble before the increasingly frail singer dies in jail.  But as the prosecutor recites irrelevant 19th century case law without understanding what she is saying, and the judge paraphrases evidence incorrectly and incompletely for the benefit of the stenographer, that outcome becomes increasingly unlikely.

The defence lawyer does more than show up in court time after time, only to have the case dismissed for a myriad of reasons that would not tolerated in most European or American courts.  He also pays Kamble’s bail, when, after several hearings, bail is set at a very high level (but eventually retracted).

He also investigates, and here, Tamhane delivers suspense as well as cause for hope. The investigations reveal a completely new angle to the case, one involving the city’s lax health and safety laws and the character of the sewage worker.

But hope is all we are left with.  Even when testimonies confirm that Kamble never performed – or even wrote – the allegedly seditious lyrics that the prosecution cites in court, the case is still not dismissed.

During the adjournments of the procedural aspect of the case, Tamhane gives us glimpses into the daily lives of the defence lawyer, the prosecutor and, saving the best for last, the judge.  The details he includes are revelatory, but even when he shows the prosecutor and her family taking in a popular show in which an immigrant family is cruelly lampooned, a kind of compassion emerges when we see her serving dinner to her lazy husband seated in front of the television in their cramped flat.

We see the defence lawyer visiting his parents, his mother worrying about the fact he is not married. We see him speaking at a conference for criminal justice and human rights and sleep on the couch with his laptop on.

There is no room for empathy with the judge, however, whose extended family gathers for a holiday at a water park.  A man whom we assume is his son tells his father that the grandson, who is about 10, does not speak and is not going to school.  The judge advises his son to put a hessonite ring on the boy’s finger and change his name, as though the name is contributing to the boy’s psychological problems.

While Tamhane refuses to sensationalise the case the procedural scenes are as riveting as are the biographical snap shots.  A highlight is the intense confrontation between the sewage worker’s abused, frightened and very young widow and the prosecutor who tries, without success, to get the better of the young woman.

Both the drama and the humour Tamhane finds in the court system emerge gradually out of our growing sense of injustice.  As helplessly as the defence, we watch a system unfold into absurdity with the ignorant and prejudiced sitting in judgement over the ordinary, respectful people. If you are reminded of the famous dragged out case Jarndyce vs. Jarndyce from Bleak House, it is because in Court, Chaitanya Tamhane becomes India’s Charles Dickens.   I, for one, await the next instalment.