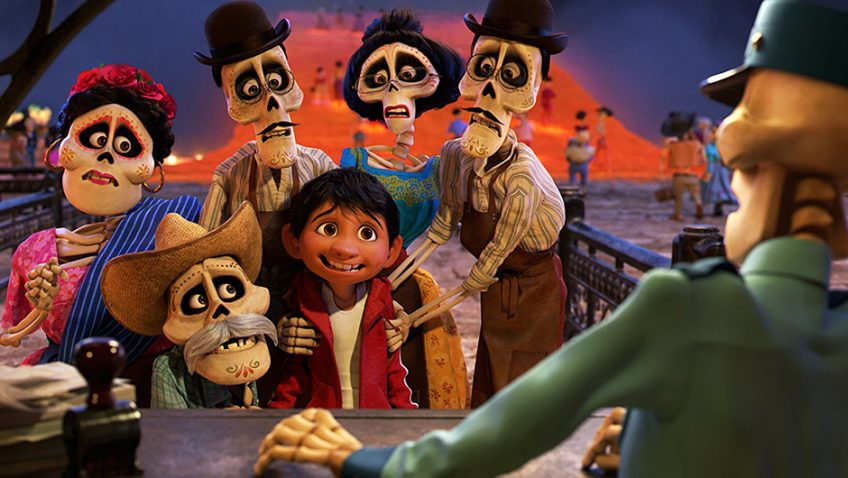 Pixar’s ebullient family film about the power of memory

Donald Trump might be building a wall between Mexico and its Californian/Texas borders, but Coco has the momentum this awards season to break it down. A product of California-based Pixar Animation Studios (owned by Disney), Director Lee Unkrich’s Coco not only celebrates Mexican culture without a gringo in sight, but exposes children to the thorny subject of death with colour and song galore. 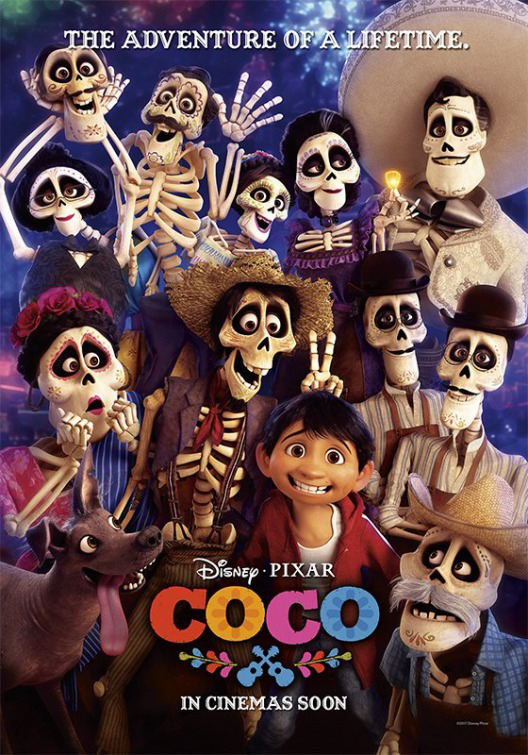 With the annual migration from the Land of the Dead to the Land of the Living on November 2nd, Coco could be a political metaphor for all that you are missing when you shut people out with closed-minded prejudice. Coco’s appeal, however, is more universal. Children who know nothing about any wall will love the way that the oldies have to recognise 12-year-old Miguel Rivera’s (Anthony Gonzalez) detective work and welcome music, love and a banished musical ancestor back into their lives.

Miguel Rivera lives with his loving parents, great-grandmother, Mama Coco (Ana Ofelia Murguia), and Abuelita (grandmother) Elena Rivera (Renee Victor) in a quaint village where they have been shoemakers for three generations. Miguel is expected to follow in the family tradition, but he favours another family vocation: music. Miguel’s problem is that music has been banned in the family ever since his great-great grandfather walked out on his wife Imelda (Alanna Ubach) and their daughter Coco (now Miguel’s sleepy old great-grandmother) to pursue his musical career.

While, unusually for Disney movie, there are no gringos in this story, New Hampshire poet Robert Frost’s line, ‘Of course there must be something wrong/ in wanting to silence any song’ gives Miguel the moral high ground in his adolescent rebellion. What better way to expose his talent to his family, he mistakenly believes, than by winning the Dia de los Muertos competition in the town square?

Awed by the statue to native son Ernesto de la Cruz (Benjamin Bratt), a dashing, guitar playing legend who was crushed by a bell at the height of his career, Miguel has been secretly teaching himself Ernesto’s songs. With his hand-made guitar in hand, he has watches Ernesto’s — a cross between Roy Rogers and John Wayne – old black & white movies, so many times, he knows them by heart. Significantly, Ernesto’s most famous song, a kind of second national anthem, is Remember Me. On the advice of a local mariachi Miguel decides it’s time to come out of the musical closet and, in the words of Ernesto, be yourself and follow your heart.

Abuelita has other plans and tells Miguel that he is expected to join the family at their ofrenda, or alter, on which photos of departed love ones are displayed, to welcome the dead home for the night. When she discovers Miguel’s guitar, she smashes it.

After spotting a family photo of Imelda, Coco and a headless man with a guitar in one hand on the ofrenda, Miguel believes that his gifts have been inherited from the great Ernesto, who is his great-great-grandfather. Taking the photo with him, and followed by the stray dog Dante, Miguel sneaks into Ernesto’s mausoleum to ‘borrow’ Ernesto’s famous guitar, that has been buried with him like the belongings of an Egyptian Pharaoh.

This act creates such a cosmological fury that Miguel, now cursed, becomes invisible to all save Dante and to his dead relatives in town for the holiday. These include all the faces that he recognises from Abuelita’s ofrenda – now detachable bones on skeletal heads with clothing hanging on them like retired Vogue models.

Miguel has a bigger problem now. He has to seek a blessing (using an Aztec Marigold) from a relative stuck in the land of the dead and return by sunrise or he will remain forever with the dead. Imelda had to stay behind because Miguel removed her photo from the ofrenda, and is furious as she could be forgotten. As Miguel learns, when one is forgotten, one’s bones disappear in a kind of second, final death, which is the death of memory. The importance of memory might be hard for young children to grasp, but the end message is clear and they can easily follow the action.

Imelda will only grant her descendant a blessing on the condition that he abandon his music. Miguel refuses. He decides to seek out his great-great grandfather, Ernesto, which is no easy task for the arrogant showman is heavily guarded in his mansion. He is in no danger of being forgotten with his huge fan base in the Land of the Living, and his sold out performance in the 02 Arena of the Dead.

Luckily, a down-and-out trickster named Héctor (Gael García Bernal) takes Miguel under his wing, promising to take him to Ernesto, as they once played music together. But Héctor, who has an interest in getting Miguel back by sunrise, wants something in return. Héctor will disappear forever unless Miguel gives Héctor’s daughter, now a very old lady, a new picture of him to revive her fading memory.

The two songs in the film, Remember Me and the jauntier Un Poco Loco that Miguel performs to impress Ernesto, are a lot of fun, but the film could have used more.  And while the portrayal of the administrative apparatus in the Land of the Dead and the interpretation of the Dia de los Muertos are delightful, Héctor is not the witty, cool and attractive anti-hero that he should be. He only really comes ‘alive’ when saying goodbye to his friend Chicharrón, voiced by cinema legend Edward James Olmos.

And for all the creativity in the superb animation, the film somehow feels familiar. The Land of the Dead looks like Fritz Lang’s Metropolis, while the spirit guide creature that Imelda uses to prevent Miguel from finding his great-great-grandfather and that Dante, an ancient Xoloitzcuintli breed of dog, becomes for Miguel, are more reminiscent of the Daemon’s in His Dark Materials than statues paraded on the holiday. The whole idea of setting a moralistic animated story on the Dia de los Muertos is not new either. The Book of Life, set on a very colourful November 2nd, also has a protagonist who departs from family tradition to be true to himself.