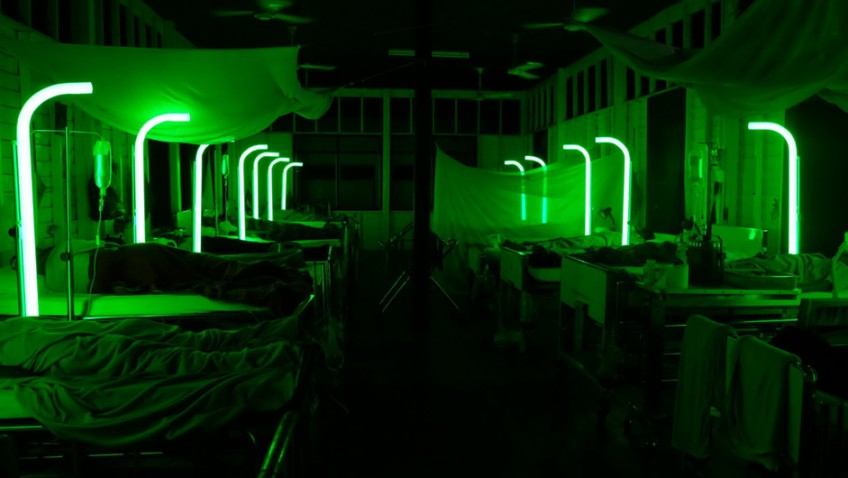 A splendid meditation about a nation’s unrest

You might not be able to pronounce his name, but Thai film maker and video artist Apichatpong Weerasethakul’s sprawling video installation is the first thing you see when entering the newly-opened Switch House at the Tate Modern, London and his new film, Cemetery of Splendour, is surely the most splendid film in cinemas this week.  A makeshift hospital attached to a school is used to accommodate soldiers who have been affected by sleeping sickness while excavating a brown site in rural Khon Kaen, the director’s home town.   Bringing in themes, locations, symbols and actors now familiar from Weerasethakul’s previous films, Cemetery of Splendour is Weerasethakul’s most accessible and coherent film yet, but still invites us to meditate on its intriguing metaphors.

From the plethora of herbal cures, dietary discussions and serious illnesses in his films, not to mention characters who are doctors, nurses and carers, it is not surprising to learn that Weerasethakul’s parents were both doctors.  Syndromes and a Century is a quasi autobiographical tribute to his parents, who worked at a medical centre in Khon Kaen. In Weerasethakul’s Cannes Film Festival winner,  Uncle Boonmee Who Can Recall His Past Lives, the dying Boonmee connects to the spirits of his deceased wife and lost son (and a whole lot more) while undergoing dialysis treatments for kidney failure.  His carer is his sister-in-law, Jen (Weerasethakul regular Jenjira Pongpas). In Cemetery of Splendour  Pongpas returns as Jen and returns to her caring role – this time, as a volunteer in the ‘sleeping sickness’ clinic. 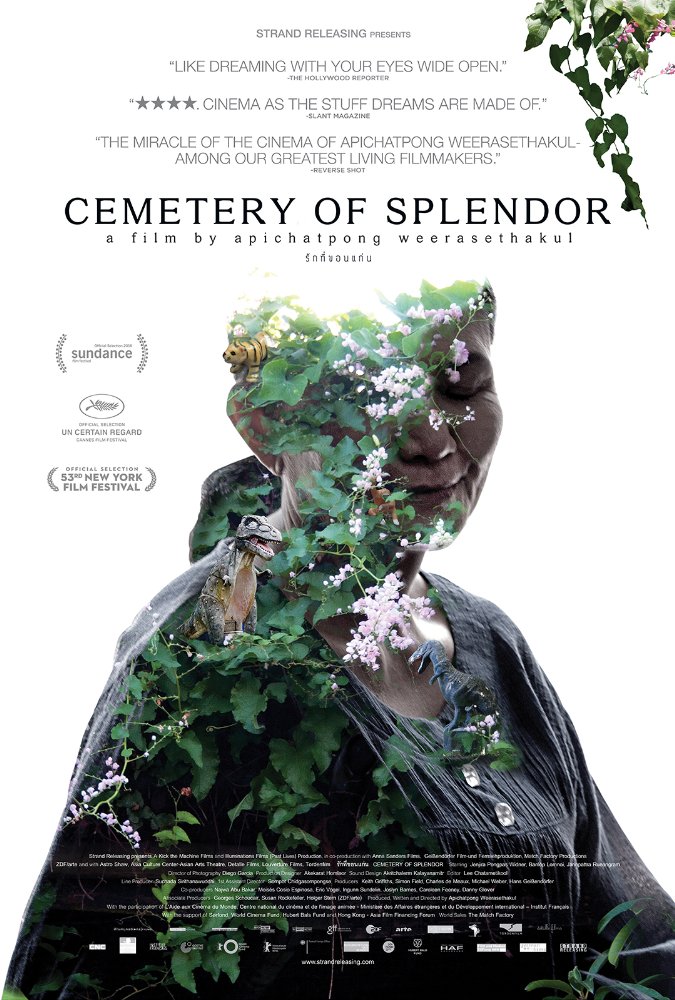 Jen is returning to the area with a physical disability.  One leg is ten centimetres shorter than the other, requiring her to walk with a raised shoe and crutches for balance.  She also reports that she is not sleeping well herself, perhaps because the nightmares the soldiers are suffering from seem to be spreading to the staff.   The doctors bring in coloured lights to try to improve the quality of the soldiers’ dreams which they confuse with reality. Early on, Jen feels that she is ‘synchronising’ with the patients and perhaps that explains her mysterious encounter with two goddesses later in the film.

The story centres around Jen’s bonding with two characters at the hospital. The first is Keng (Jarinpattra Rueangram), a mysterious female psychic (Jen suspects she is from the police) who helps families communicate with their sleeping relatives.  Jen and Keng talk and laugh about many personal and general issues, such as Jen’s marriages and her hopeless diet (she eats throughout the film).  Keng also takes Jen on a virtual tour of a luxurious invisible kingdom in the woods.  As they wander through it, Jen mentions that her first husband was a ‘monster’ with whom she eloped while very young.  They see two statues of a loving couple, but in the second, the couple are skeletons.  Toward the end of the film, Keng applies an herbal balm Jen has shown her to Jen’s deformed leg in a startlingly tender and erotic scene.

The second relationship is with Itt (Banlop Lomnoi), a handsome young soldier who apparently has no loved ones to visit him.  When Itt first awakens and Jen takes him to lunch, however, he is preoccupied with finding the charger for his phone because he wants to call his family. Jan becomes fascinated by a notebook she finds by his bed containing words, symbols maps and diagrams that yield no meaning.

Itt is fascinated to learn that Jen’s husband is an America who is busy trying to renew his visa.  Itt jokes that he might be a terrorist which is why he can’t go back to America.   At a picnic, Itt confesses that he wants to leave the army as he sees no future in his dead end job there. As he starts to discuss his dream of selling mooncakes at a gas station, he falls asleep sitting up.

Lomnoi starred as a soldier in Weerasethakul’s cryptic early film, Tropical Malady, where he comes into contact with a tiger shaman.   It turns out that in this film he has also become the victim of malevolent spirits

Shortly after praying at a shrine with Richard, her husband, Jen is sitting alone at an outdoor table eating fruit when two attractive young women (Sujittraporn Wongsrikeaw and Bhattaratorn Senkraigul) – join her.  In one of the most brilliantly directed, surreal scenes of any of Weerasethakul’s films, the two women admit that they are the living, so to speak, embodiment of the two statues of goddesses at the shrine.  They also explain the source of the sleeping sickness.  On the site of the school and hospital there used to be a royal palace, but war broke. The spirits of the dead kings are sapping the soldiers’ energy to continue their battle.  Then, after what Jen believes is a joke about their flawless complexion, they tell Jen that they are also dead. Stunned, the smile disappearing from her face, Jen sits in silence dipping her hand into the bag of fruit as though on autopilot.

Weerasethakul has said that he was inspired by a news item about a group of soldiers who were quarantined in an army hospital.  This occurred in the midst of Thai’s most recent political turmoil sparked in 2013 by protests about government corruption that culminated in the Army declaring martial law in the country.  If Cemetery of Splendour is a political allegory, it is also one about the consequences of kings, rulers and oppression. An entire nation has to live with the quashed dreams and the nightmares that plague the living and the dead. From 1932 until around 1972 the country suffered in the hands of various military dictators but the Thai ruins in the province of Khon Kaen also testify to an ancient history. Clearly, there is a personal element to this allegory that preoccupies Weerasethakul. His installation in the Tanks at the new Tate extension pieces together a narrative about the military’s suppression of a village of young men that, like Cemetery of Splendour, spins together history, politics and the supernatural.

The young Mexican cinematographer Diego Garcia lends the film a balmy, otherworldly and dreamlike atmosphere. Garcia’s work in a modest documentary about the island of Fogo served as a calling card that no doubt led to his work here.