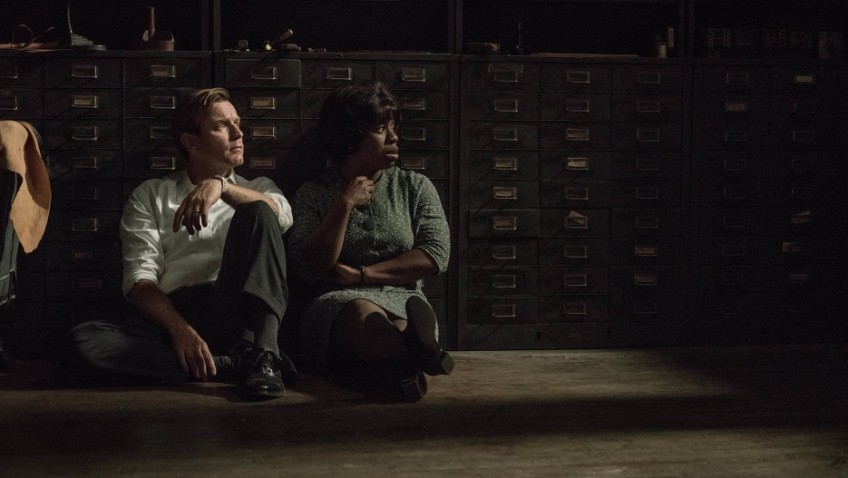 Dozens of directors have successfully ignored the warning about working with animals and children, but in his directorial debut, American Pastoral, Ewan McGregor gets the cows and the children (the talented actresses Ocean James and Hannah Nordberg) just right. It is the warning about tackling a Philip Roth novel – and what is among his longest, trickiest and most complex novels – that McGregor seems to have overlooked. If there were an Olympic Medal for directing, he would get a10 out of 10 for difficulty, a 5 for execution and a 2 for creative interpretation. Apparently, the brown-haired Scotsman of average height (in the 1960s) was the best choice to portray a big, tall, blond Jewish star athlete turned businessman from Old Rimrock, New Jersey was cast as the novel’s protagonist, Swede Levov, at the time Australian director Phillip Noyce (Rabbit Proof Fence) dropped out. McGregor gallantly came to the rescue of the project, and many jobs, in what is ironically, a case of form merging with content: for that’s the kind of guy Swede Levov is.

The film connects the plot points of Roth’s sweeping novel which is set against, and integrated with, the political turmoil and civil unrest of the Lyndon Johnson years. Seymour Levov, nicknamed the Swede for his height and blond hair, was a star athlete in High School, and went to college, because that was the thing to do; enlisted in the Marines to do the right thing, and then, unlike his belligerent younger brother, Jerry (Rupert Evans), a surgeon, dutifully took over the family glove manufacturing business, supporting his semi-retired father, Lou (Peter Riegert).

The first big dramatic scene in the film, and Swede’s first and only show of rebellion, is when he introduces Lou to his fiancée, Dawn (Jennifer Connelly), an uncompromising, Shiksa and former Miss New Jersey. In a scene typical of Roth, Lou and Dawn belt it out over religion. She refuses to bring up her children Jewish, although they must be baptised and receive Holy Communion. When Dawn stands up to declare love for Swede even if it means not having children, Lou gives up.

The perfect couple, envied by all their friends, move to large house (in the ‘Republican’ belt as Lou says) and farm in rural New Jersey where they bring up one daughter, Merry, the apple of her father’s eye. When Dawn and Swede take her to a therapist (Molly Parker) about her stutter, the therapist suggests it is a defence against competition with her mother. The therapist’s reappears throughout the film, but too much is omitted to make real sense of her role. Merry is 16 when the Weatherman are bombing municipal buildings in New York, and she becomes radicalised, much to her parents’ alarm. The glove factory (which employs 80% blacks) comes under attack in the riots and Merry treats the Swede award for keeping it open with disdain. Her trips to the NYC culminate in her disappearance for good after the bombing of a local post office in which a man dies. While Dawn has a mental breakdown – cured only by plastic surgery and an affair – Swede searches for his daughter. Years later when Swede finds her, Merry has embraced Jainism. Looking like a skeleton with a veil over her mouth – to avoid swallowing a living creature in the air – she lives in a derelict slum in Newark.

Your heart sinks when the film begins with a narration (lines from the novel) from a character called Nathan Zuckerman, who is attending his 45th high school (something he has never done) and bumps into Jerry Lovov who tells him his brother is dead. This is a kind of framing device as it is Zuckerman, who identifies himself a writer although we never learn why, who is narrating the story.

But scriptwriter John Romano (who did much better with The Lincoln Lawyer than with Nights in Rodanthe) and McGregor do not appear to appreciate the significance of Zuckerman, a regular alter-ego to Roth since 1974. It is like removing narrator Nick Carraway from The Great Gatsby. Zuckerman is not just any narrator – he is a writer. What factual information he does not gather from Jerry and others, he invents to complete his mythical tale of a perfect life that was an illusion: the man everyone envied who becomes the tragic hero without doing anything wrong. In fact, to add another literary layer, Roth uncovered a real person from New Jersey called the Swede and his real life bears many similarities to his, and Zuckerman’s character. For Roth’s title is significant not only for its tragic irony (a trait that McGregor’s Swede does not impart). In addition to the religious connotation of a ‘pastoral’, Pastoral refers to the portrayal of country life, typically a romanticised form, hence the Lovov’s farm. But ‘pastoral’ is also a work of literature that portrays an idealised version of country life. And that is what Zuckerman is creating and destroying.

It is odd, too, that Romano and McGregor spend so much time on the early religious debate only for any further discussion of religion to disappear. Even those who don’t know Roth might be expecting that elephant in the room to trumpet once again.

McGregor’s direction is not inspired, but there are even some striking moments in the film, notably in the relationship including the Swede and Molly. But even here, what is, in the novel, one of the most heart-wrenching father-daughter rifts since Brünnhilde and Wotan in Die Walküre, is too often left to languish in underwritten encounters. One inspired scene takes place in the glove factory, which McGregor successfully conveys as a symbol of a dying America, where gloves were handmade in family businesses rather than in Asia.

If the factory and the American Dream family who run it are both real and part of Zuckerman’s nostalgic lament for his country, one of the best scenes is already pointing in another direction. When showing an alleged student visitor named Rita Cohen (Valorie Curry), how gloves are made, the black employee advises her to ‘make a fist’ when she firsts tries on a pair of gloves. Rita herself, who turns out to be someone very different, is chillingly played by Curry, but is directed like another real character instead of like a symbolic apparition in Zuckerman’s nightmarish invention.

Despite Jennifer Connelly’s valiant efforts, Dawn is never fully fleshed out, probably due to a lack of time. When she has her breakdown and lashes out at her husband for having destroyed a music career we never heard of, the Swede merely remains silent and we don’t know what to think. Similarly, Dakota Fanning is very good as the mixed-up, venomous teenager, but less convincing in the Jain scenes. More problematically, McGregor never quite takes on a heroic aura when he dies at age 68 in a symbolic reference to the year the post office was bombed, in 1968.