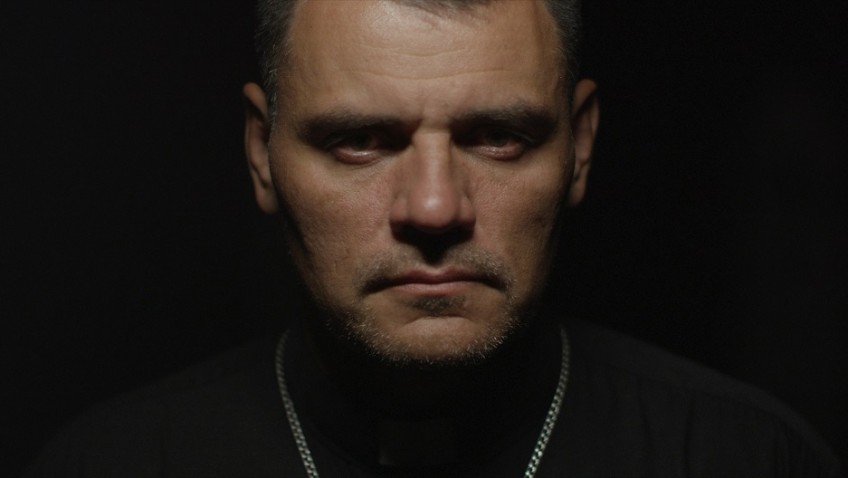 A humbling film about the unintended consequences of Brexit.

The aptly titled, low-budget documentary Almost Holy is, on the surface, about Gennadiy Mokhnenko, a self-appointed social worker and pacifist Ukrainian nationalist, called a saint by many and a vigilante by others.  But as the 100-minute documentary develops, it leads us beyond the ordinary challenges of his work, and becomes a thought-provoking warning about the unintended consequences of the Brexit vote and the danger of Donald Trump’s posturing with Vladimir Putin.

Steve Hoover’s interest in Mokhnenko is understandable.  Hoover’s first feature documentary (co-directed and co-written), Blood Brother, was about a young American drifter who was so captivated by a group of homeless children with HIV in India that he settled in the village and tried to adopt them.  Mokhnenko is equally idealistic and caring, but he is a grounded family man with a professional standing in his community.  As to the origin of his calling, Mokhnenko recalls that, as part of his military duty, he saved a man’s life in a fire, and could not forget the satisfaction derived from that experience.

Donning a priest’s collar, a large crucifix and an evangelist’s rhetorical style, Mokhnenko preaches to a jail full of women with alcohol or drug dependencies.  He has also started a movement called ‘Sick of it’ that has spread to Donetsk and Kiev.  In one manifestation, groups of concerned residents chant [We are] ‘Sick of it’ referring to drug addicted children on the streets of Ukrainian cities.

More casually dressed, Mokhnenko runs the Pilgrim Republic, a rehabilitation centre for the homeless offspring of such women, and of children whom have become addicts.  He has a lovely wife and three children of his own, but offers to become a father to dozens of children if they are willing to become ‘normal people’.  The only goal he has for his own son is ‘that he have [sic] a big heart,’ Mokhnenko tells us.  Mokhnenko wants each of the centre’s children to be have food, a home, an education, friends, a family and a job.  But in Mariupol, an impoverished, polluted, dreary industrial city, that sounds like an impossible goal for anyone; let alone abused, illiterate children, any so strung out that they cannot remember their names.

Supported by a small grant from the Mayor of Mariupol (there are no government agencies set up to carry out Mokhnenko’s work), Mokhnenko offers a home to any child in need of shelter, or refers them to appropriate hospitals. The mayor explains that after a tense initial relationship, ‘we now realise that his work is crucial.’

It is not Mokhnenko’s success or altruism that is behind the qualifying ‘almost’ of the title, but concerns about Mokhnenko’s methods.  He will forcefully remove a child from the setting of abuse and take children off the streets without parental permission.  Mokhnenko defends his methods on talk shows to approving cheers from the audience.

Two weaknesses of the documentary is that we do not learn anything about the behind-the-scenes work in the rehab centre . Who are the people who help him with  the task of detoxing the children, cooking for them or educating dozens of special needs children?  Nor do we witness an example of the downside of his vigilantism or hear from his detractors.

However, it is impossible not to be impressed by this hard-working man who clearly loves each child he meets.  ‘There’s nothing I hate more’, he says, ‘than telling a kid his parents are dead, ‘ referring to a little boy we have met named Danik.  Hoover then shows us an image of the last time Danik saw his father who died a few weeks later from alcohol poisoning.

With the annexation of the Crimea and the Kremlin’s war with the Ukraine, the film’s focus widen.  Mokhnenko, who speaks broken, but understandable English (subtitled in the film), and draws contemporary meaning from the Russian classics, is an EU advocate, ever hopeful that the Ukraine can join the EU.  His interest is not only financial: he clearly espouses western and European values.  You can criticism him for idealising the west (he is delighted to be eating a hotdog and drinking a take-away cappuccino) but when you see the images of Mariupol’s Soviet-styled apartment blocks, pollution, and derelict municipal buildings, and think of the persecution of journalists and intellectuals and human rights activists in Russia, you can appreciate why he does so.

Mariupol is a city of regional significance in south-eastern Ukraine. Situated on the north coast of the Sea of Azov at the mouth of the Kalmius River it is has strategic military importance for Russia.  We leave Mokhnenko when the fighting hits Mariupol with fears that all the work he has done will be undone overnight by Putin’s war with the Ukraine.

As you look on this man, who claims he puts a smile on his face because he has to be strong for others, you feel for him.  If the enemy to stand firm against is not the EU, but ISIS, North Korea, Assad, Ali Abdullah Saleh, Recep Tayyip Erdoğan and other dangerous autocrats, for Mokhnenko the enemy is not Europe, but Russia.   Already struggling to establish his western values  and fund his humanitarian work in Ukrainian cities, Mokhnenko is left wondering what hope there will be with an weakened EU and a correspondingly strengthened Vladimir Putin.