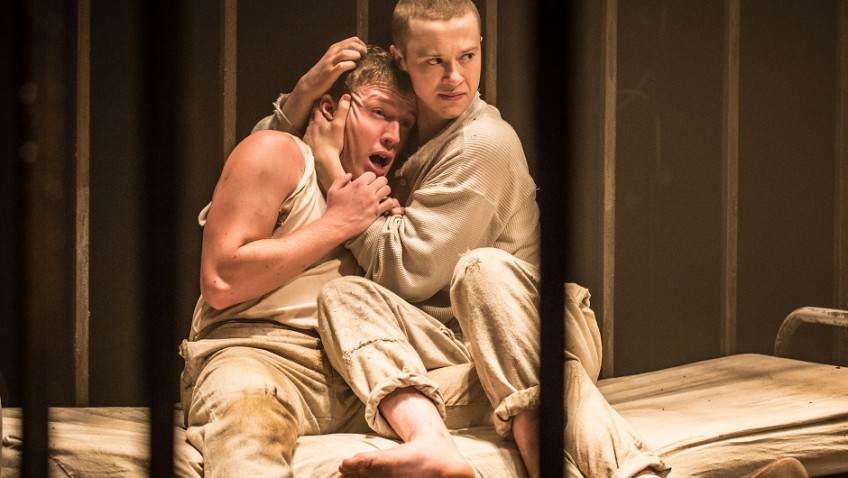 Robert Tanitch reviews the revival of Deathwatch at The Print Room at the Coronet, London W11 Jean Genet (1910-1986), delinquent, thief, poet, novelist, playwright, spent much of his life in reformatories and prison.  So it is not surprising that the very first play he wrote, and which he directed at its premiere in 1949, should have a prison setting.

Deathwatch is a homoerotic daydream, a prisoner’s fantasy, in which the only possible end is death or, as they say in French, une petite mort.

Genet’s outcasts, love to dress up, play games and act out their own and others’ fantasies. Shut up in a cell, what else is there for them to do but to fantasize and “kill each other off”?

Three prisoners share a cell: Green-Eyes (Tom Varey) condemned to die, Lefranc (Danny Lee Wynter), a petty thief and Maurice (Joseph Quinn), a 17-year-old delinquent. So who will kill whom?

The actors perform in a cage in a circus ring and the director, Geraldine Alexander, allows gay Maurice to camp it up but the homoeroticism, so explicit in all Genet’s works, and very much so in his short prison film, Un Chanson d’Amour, is, oddly, kept firmly under wraps

The actors do not do anything that might frighten the horses.

It is very difficult to get Genet right on stage. The only  person I know who has had a real success in Britain with Genet was Lindsay Kemp in his stunning, hallucinatory, incense-ridden, transvestite “pantomime for Jean Genet” at  The Institute of Contemporary Arts in Pall Mall in 1974.