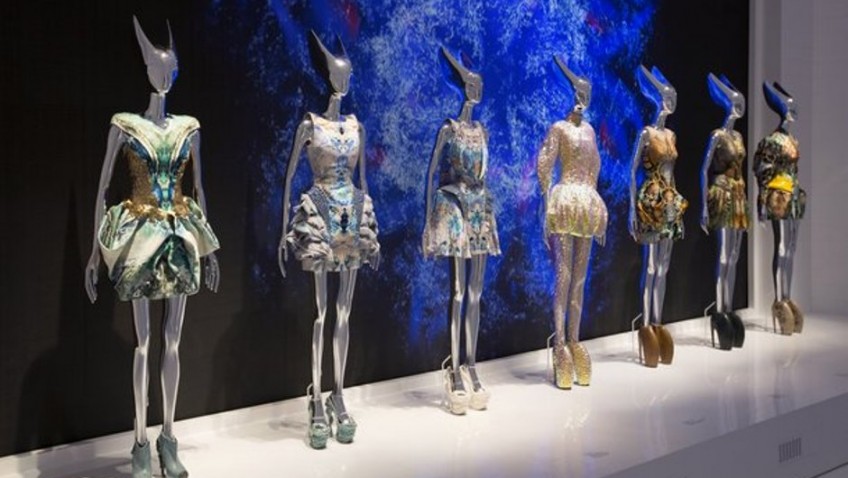 The most thrilling theatrical experience I have had recently, and at two in the morning, is at the V&A where there is an exhibition, a major retrospective, of the British fashion designer’s work.

I was there at two in the morning because Savage Beauty is sold out during the day. The exhibition was packed all night. hematically arranged and brilliantly staged, Alexander’s ravishing costumes are presented as works of art to be seen not worn. They have an outrageously extravagant beauty and at the same time a disturbing sexuality.

Savage Beauty is very Gothic. The mannequins are encircled by gold gilded mirrors. Their faces are invariably hidden, masked, not so much V&A as S&M. The shoes are high-heeled and ankle-breaking.

“I want people to be afraid of the women I dress,” said McQueen.

The Room of Curiosities is a double height gallery, crammed high (haute couture?) from floor to ceiling with ensembles and accessories and interspersed with film footage of his catwalk shows. It is, in every sense of the word, overwhelming.

McQueen, son of a cockney taxi-driver, left school at 16 with one O level in Art. Twelve years later he was head designer at Givenchy.

The ultimate rule-breaker, McQueen was branded the bad boy of fashion, the hooligan of fashion, the Edgar Allan Poe of Fashion. He committed suicide at the age of 40 on the day of his mother’s funeral.

Savage Beauty will again be open throughout the night on the last weekend of its run at the V&A.