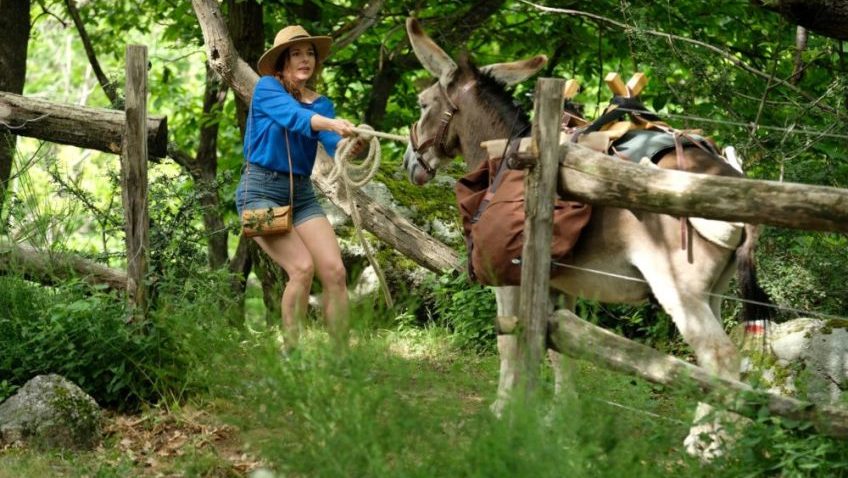 If you can’t holiday abroad this summer, let the irresistible Laure Calamy transport you.

One of the most unexpected literary adaptations of the year, My Lover, My Donkey and I is based on the humorous travel memoir from 1879, Travels with a Donkey in the Cévennes by Robert Louis Stevenson. The French title Antoinette in the Cévannes is much better, but the cringeworthy English title does clearly introduce the three main protagonists, albeit in reverse order of importance. And as this suggests, writer-director Caroline Vignal’s frothy, wistful and engaging Gallic road movie through the magnificent hills and valleys of the Cévennes has some delightful surprises and a big heart.

Much loved by her young students, flamboyant and buoyant primary school teacher Antoinette (Laure Calamy) has hit 40 but is playing it dangerously at an end of term talent show where she leads her class in a spicy love song aimed more at the parents – or one particular parent – than the kids. The uneasy audience is silent until Vladimir Loubier (Benjamin Lavernhe from C’est La Vie), the father of one of Antoinette’s students whistles and applauds a little too enthusiastically. The teacher, overdressed in a revealing long gown, radiates happiness.

Antoinette is ecstatic at the prospect of spending part of the summer break with Vladimir while his wife is away with their daughter. She is all over him when he sneaks off after the performance to give Antoinette the bad news. His wife Eléonore (Olivia Côte) has changed their plans, and they are going on a walking holiday as a family. Upset and determined, Antoinette impulsively arranges her own holiday where she hopes to be reunited with her lover.

With her flimsy summer dress and heels Antoinette arrives like a fish out of water to be introduced to her donkey, Patrick at the first auberge on the 252-kilometre trail that stretches between St Jean du Gard in south-eastern Cévennes to Le Monastier in the Haute Loire. A group of curious, middle-aged couples, already well acquainted, pump the initially reticent but soon indiscreet schoolteacher for information. The knowledge that she has come to hook up with a married lover soon spreads across the trail, and she discovers that her story has preceded her.

After a late start on her first day, Antoinette instantly regrets having signed up to travel with a donkey, as Patrick simply stops and refuses to go on. Anyone who has read the Stevenson memoir, will recognise his frustrations with his Donkey, Modestine nearly 150 years ago.

At one point resorting to the stick in frustration, she falls to her knees apologising to the animal. Before long, Antoinette discovers that Patrick likes to walk and listen which suits the Antoinette who is naturally garrulous and in need of a confidante. Before long, they are making headway across the stunning, rugged landscape as Antoinette tells Patrick about her long list of lovers, including Vladimir, the man whose path she is still hoping to cross.

If the daytime is spent with Patrick, most evenings are spent in relative civilisation with Antoinette providing updates on her progress to eager trekkers along the way and enjoying a one-night stand with a burley biker.

Frustrated that she will never find Vladimir, Antoinette is about to return to Paris, when she begins reading Stevenson’s book and a kindly inn keeper tells her Stevenson’s romantic story.

After a year of living in France with the married American writer Fanny Van de Grift Osbourne and her children, Stevenson is distraught when she returns to the USA. He remains in France, walking the Cévennes trail to distract him from his loss. Whereas Stevenson slept under the stars in a sleeping bag, there are only two times in the film when Antoinette sleeps outside and one is with her lover under the stars. This scene is clearly a reference to Stevenson’s thoughts of Fanny: “to live out of doors with the woman a man loves is of all lives the most complete and free.” Such reveries make Stevenson more determined than ever to risk his fragile health and travel to California in hope of being reunited with Fanny.

A prolific stage and screen actress in France Calamy (best known here as Noémie in Netflix’s Call My Agent) is a revelation. It is rare in American and British films to have a forty-something actress playing the lead in a comic film as a sexy, single woman with bad taste in men, although no one can miss the influence of Bridget Jones. Calamy is in every scene, and she not only carries the film, she is the film, displaying a rare physicality and such unpredictable reactions to the characters she encounters that you never tire of watching her.

In the 2014 film Wild, based on a true story, Reese Whitherspoon plays a troubled divorcée who travels on her own from the Mojave Desert to the Oregon/Washington border to find herself and start a new life. Also, in 2014 and based on a true story, in Tracks, Mia Wasikowska plays another troubled young woman who travels across Australia with her dog and four camels to carry her gear. These are introspective dramas with “life affirming” endings, and though the trails are more arduous than Antoinette’s, the message is the same: it’s not the destination but the path.

Given the comic tone of much of Vignal’s film, you might expect that Antoinette’s gamble pays off in the same way as Stevenson’s does (his fourteen-year marriage to Fanny was only cut short by his early death). Antoinette does learn about herself and emerges a more genuinely self-confident person, but Vignal is not content to leave it there. She reserves the biggest surprise for the end, which is, intentionally or not, more alarming and uncertain then reassuringly feel-good.