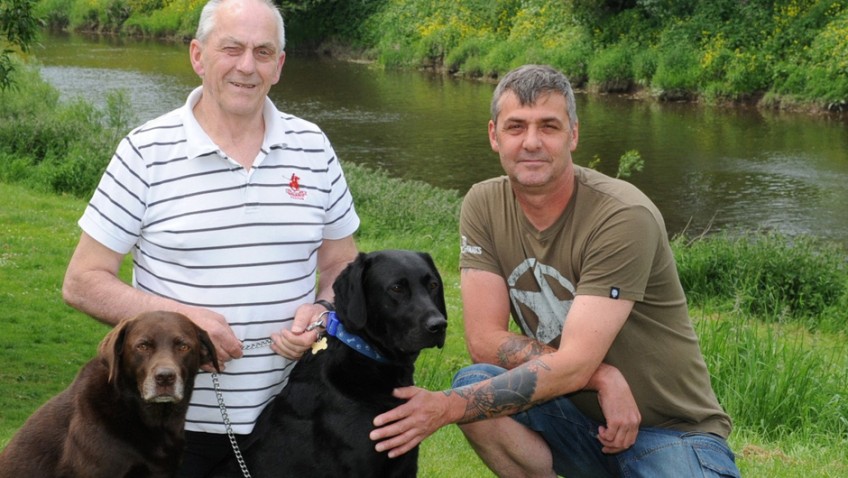 A hero dog has been hailed a real-life Lassie after saving the life of her drowning owner who had fallen in a river – by jumping in and PIGGYBACKING him to safety.

Pete Alderson, 73, was walking family pets Wispa and George when he plunged into the River Wye near his home in Hereford at 9.40am last Wednesday (27/5).

The pensioner, who cannot swim, began to get into difficulties and panicked when he swallowed water and disappeared beneath the surface.

But as he started to slip into unconsciousness, Pete realised seven-year-old Labrador Wispa had jumped in the water and was paddling next to him.

He climbed onto the back of the heroic pooch which then incredibly swam back to the bank where he was able cling to some reeds and shout for help. Neighbour Martin Green, 47, who had heard the commotion from the other side of the river, quickly rushed to the scene and managed to keep Pete afloat.

A passing rower also helped before the OAP was rescued by a boat crew from Hereford and Worcester Fire and Rescue Service.

Once he was taken to shore he was rushed to Hereford County Hospital where he was treated for the effects of hypothermia.

Pete, who lives with his wife Ronnie, 53, was allowed home the same day and has since made a full recovery.

Yesterday (Thurs), the retired bin lorry driver said he thought he was going to die until Wispa came to his rescue.

Pete added: “Both dogs had gone in the river and Wispa came back onto dry land but George kept swimming across the other side.

“I thought I would go down a closer so I could shout to him back but I just slipped and fell in.

“I remember going down and I was panicking and had my mouth open so I know I swallowed lots of water.

“I thought it was all over, everything went peaceful and quiet and I had flashes through my mind that I would never see my wife or my grandchildren again.

“Just as I was going into unconsciousness and was floating towards the top I saw Wispa right by me swimming.

“I grabbed hold of her back and she took me to the bank. It was like she was giving me a piggyback. She just pulled me along to the river bank.

“I then grabbed hold of the weeds to keep myself from sinking. I was really weak, I couldn’t get my breath and my chest was tight.

“I could feel myself slipping back in but then all of a sudden a coat was thrown over my shoulders and it was my neighbour Martin.

“He got in and managed to keep me afloat by holding up my belt before I was eventually rescued. Martin Green with Wispa the dog

“The dog is a real hero. If Wispa hadn’t taken me to the bank in the first place I wouldn’t have been here.

“And if Martin had let me go, I would have gone.

“It is the closest I have ever come to death.”

Pete, who has two daughters and three grandchildren, was in the water for a total of 25 minutes.

He was put under a heated blanket and tests were carried out on his lungs before he was allowed home four hours later.

Pete added: “In the ambulance I was shaking and couldn’t breathe. I thought I was going to go now. I was petrified.

“I couldn’t even feel my legs, they were freezing.

“When I came home I was an emotional wreck all of the next day because of what had happened.

“I have made sure I gave the dogs plenty of fuss and bought them treats and bones to say thank you. She is a real-life Lassie,”

Pete’s neighbour Martin, who managed to keep him afloat for 10 minutes before the rescue boat arrived, said he heard the shouts from his living room.

He added: “Me being nosey I thought I would go down to the gate and have a look and then I heard: ‘There’s a man in the river’.

“I turned him over to see if I could speak to him and he was blue and his face was white as a sheet.

“I could see he had been there for what must have been around 10 minutes and was clinging on for dear life before I had even got there.”

A rower from Hereford Rowing Club also helped Martin keep Pete afloat and luckily a member of the public had phoned the emergency services.

He was then rescued taken to the shore by a boat crew from Hereford and Worcester Fire and Rescue Service.

A spokesperson for West Midlands Ambulance Service said: “We were called at 9.42am to reports of a man in the river.

“The fire service rescued the patient and got him out and took him to the rowing club.

“We treated the patient, who was conscious and breathing, for the effects of the cold and he was taken to Hereford County Hospital.

“One ambulance and one paramedic area support officer attended.”

By Ian Murphy and Jessica Phillips