Home / LIFESTYLE / Here’s one I made in the lockdown 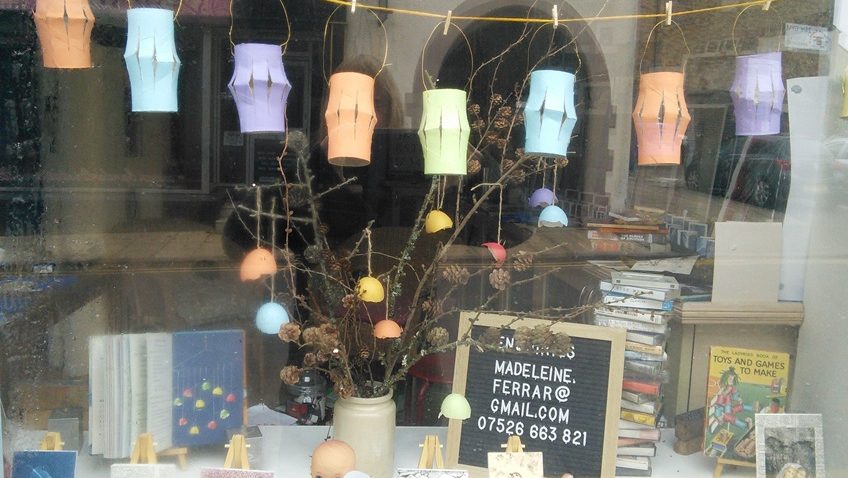 Here’s one I made in the lockdown

When the lockdown was first announced there was much talk about how we could most usefully spend our time, undistracted from the demands of our everyday lives. We could take up a new hobby, learn a language, or plant a garden. Moreover, it was suggested that people who make things – “crafters”, as they are now called – would come into their own.
They could teach us a salutary lesson about how to while away the time doing something that would be both therapeutic in these troubling times, and give us a sense of purpose. There is nothing better to calm the nerves, they said, than a spot of cross-stitch, and no better way to overcome feelings of isolation than to screenprint an inspirational message on a tote bag.

Not that I needed to be convinced. I’ve been addicted to crafting all my life. As a small child in the fifties I made a pair of sandals out of cardboard and bits of raffia. They fell apart almost immediately. Undeterred, I moved on to perfume manufacture, soaking a concoction of flower petals from our suburban garden in jam jars. With Christmas came large-scale manufacture of decorations made from milk bottle tops, stained glass nativity scenes fashioned from cellophane sweet wrappers and advent calendars cut from cereal packets. The arrival of Blue Peter gave us children much-needed encouragement, and helped us to raise our game. We turned margarine tubs into plant pots and washing-up liquid bottles into pen holders. My favourite was the Christmas wall decoration made from a polystyrene ceiling tile, a bit of tinsel and a cake doily.

Now in my sixties, and in spite of the fact that I have little aptitude when it comes to practical or creative tasks, I haven’t lost the enthusiasm for making things. I have done evening classes in pottery, knitting, felting, silversmithing, basket-weaving, all types of fabric-printing, stained glass, mosaics, rug making; the list goes on. In fact, you name it, and I’ve probably had a stab at it. Actually, I have yet to get on to macrame or quilling, the first because I don’t know what it is, the latter because it’s my sister’s speciality. (Quilling, in case you wondered, involves coiling narrow strips of paper into various patterns and sticking them onto card.)

That crafting is good for us as individuals is uncontroversial, but practitioners will often claim, quite sanctimoniously, that it will do us good as a society: that it can help save the planet. It will stop us buying stuff, the argument goes, and keep us out of IKEA. The flaw in this position lies in the fact that we crafters are obsessional creatures. Most retail parks will have at least one emporium selling craft materials, and we inevitably end up creating way more stuff than we could ever either sell or give away. We just can’t stop ourselves.

So what will happen to all this extra stuff when the lockdown is over? If you have a large extended family, as I have, you can foist your surplus onto them. Failing that – and given the timing – I have a sinking feeling that it will crop up in the ubiquitous autumn and Christmas craft fayres. I can see it now: mountains of woolly bobble hats, crocheted blankets in garish colours, and handmade cards for every occasion. But have you ever heard anyone say that what they would really like for Christmas is a bookmark? Or a lavender bag? No, because most of what’s on sale will be stuff that nobody either needs or wants.

Those of us who feel a measure of guilt about adding to the sum total of merchandise on the planet have turned recently to making things from found objects and recycled materials. This mainly consists of transforming things we no longer have a use for into something equally dispensable. Vinyl records, for instance, can be turned into funky fruit bowls. Found objects take us into the realm of shabby chic; picture frames can be made from bits of driftwood and pin boards from the corks of wine bottles.

This desire to make use of what we already have is behind the recent surge of interest in eco-printing. This is printing using natural vegetable dyes such as onion skins. It’s not particularly straightforward, though, and it means that everything comes out looking somewhat insipid, even slightly grubby. I’m currently immersed in paper-making, another eco-trend, and what a palaver that is. The materials needed to make paper consist of scraps of paper – junk mail is good – and water. You’ve got it: I’m making paper out of – paper. Paper-making could be seen as a metaphor for the whole crafting industry as it epitomises the sheer absurdity of it all.

Absurd but not entirely pointless. We do what we do, not for money or for public acclaim, but for the sheer enjoyment of it. Our actions won’t bring world peace, stop climate change (in spite of what the eco-crafters might claim), or cure cancer. They do however, say something about the human condition, and the need we have to make our mark on the world, and leave something behind when we go. This is hardly the time to start agonising as to whether what we do is worth the effort. Suffice to say that it sustains us; we should be thankful for that.