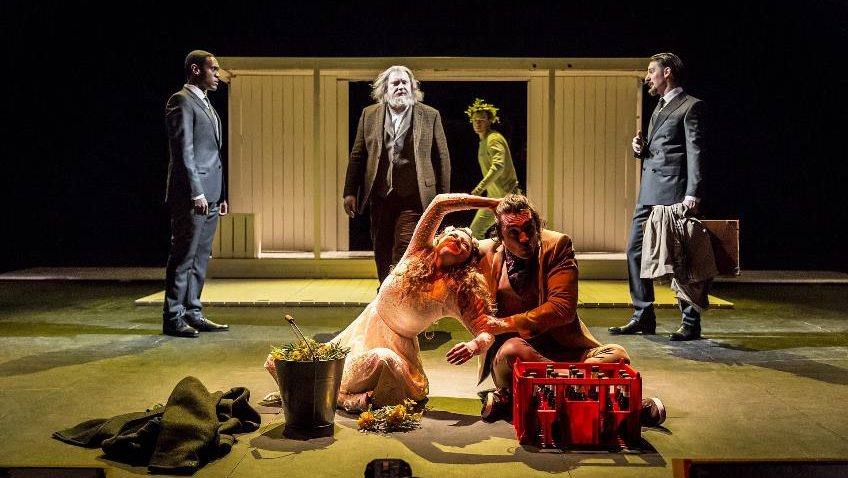 Declan Donnellan’s production for Cheek by Jowl, which was seen at the Barbican Theatre in 2017, immediately establishes that Leontes and Polixenes, friends since childhood, now grown-up and married, are still playfellows, boys who have not grown up.

Leontes (Orlando James), convinced that his wife Hermione (Natalie Radmale-Quirke) is having an affair with Polixenes and that the baby she is carrying is not his, behaves like a jealous tyrant with mental issues, arresting her and putting her on trial for adultery.

Leontes’s jealousy is second only to Othello’s. The production’s high spot is the trial and the Oracle’s declaration that Hermione is innocent. Orlando James laughing hysterically, tears up the scroll (blasphemy!) and then has a complete breakdown, sobbing uncontrollably.

There have been many occasions when I have been watching The Winter’s Tale and wishing Shakespeare had stayed with the tragedy in Sicilia and had cut the pastoral scenes in Bohemia.

Donnellan turns the sheep-shearing festivities into a TV chat show, hosted by the ad-libbing rogue Autolycus (Ryan Donaldson), which is a terrible idea.

Donaldson’s funniest moment has nothing to do with Shakespeare whatsoever. He takes on the role of customs officer and searches the baggage of the Old Shepherd

An interesting innovation is to play Mamillius (Tom Cawte), Leontes’s young son, as a boy given to tantrums, jealous of the forthcoming baby, and behaving badly, just like his dad

The play’s most famous and magical moment is when the statue of Hermione comes to life. Acted out in candlelight it might have worked on the Barbican stage but on screen the image was too dark and did not have any impact at all.

One bit of dialogue, given our present lockdown circumstances, took on a new resonance and it was Leontes’s greeting to Florizel and his fiancée Perdita on their arrival in Sicilia: “Purge all infection from our air whilst you do climate here.”

The show can be viewed on You Tube until 27 April by clicking here.