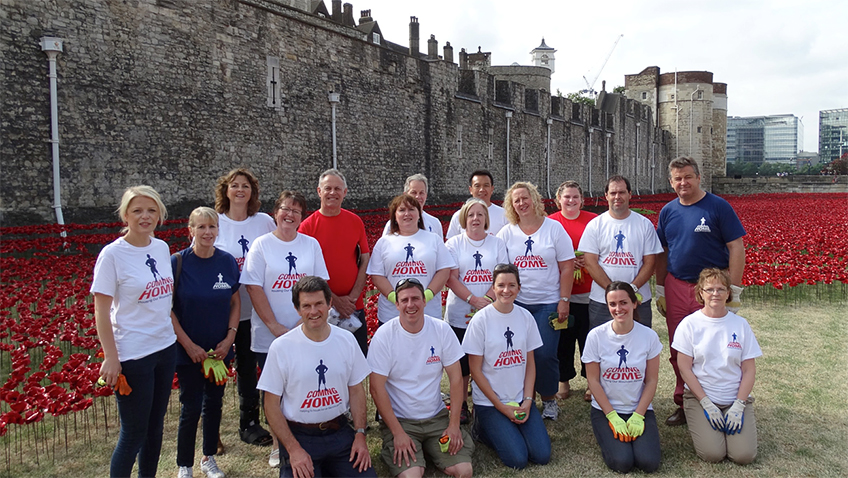 Haig Housing Trust is the country’s leading charity for military housing and provider of rental housing for ex-service people in the United Kingdom. It was one of the organisers of the hugely successful Poppies at The Tower installation that raised millions for veterans’ charities. The Long Walk Home has been planned as both a mark of respect to those who died in the Great War and to raise funds for the charity. It also marks an important milestone for Haig Housing Trust, which was launched in memory of Earl Haig soon after the end of the Great War.

Each of the walkers will be taken to Ypres in Belgium, the scene of three major battles and the Headquarters of the British salient in the First World War. From there they will begin their journey home over the following four days, travelling to the Belgian coast and on to Dover and central London. From Dover the walkers will make their way to Canterbury and Faversham, moving on to Rochester and Rainham and then Dartford and Sidcup. Staying in a hotel somewhere in Kent on the night before Remembrance Sunday, they will march to The Cenotaph, Whitehall, the following morning.

Along the route from Dover to central London the people of Kent will be asked to host the brave veteran walkers overnight to demonstrate the ‘Dunkirk spirit’. It is hoped that the walkers will be joined along the route by members of the public, politicians and celebrities to raise awareness and so raise funds for the charity.

“Haig Housing Trust started its life to meet the needs of veterans returning from the Great War. Prime Minister Lloyd George campaigned to build homes fit for heroes and ever since, Haig Housing Trust has striven to do just that.

“The Long Walk Home recognises the great sacrifice given by so many in that war and is a pilgrimage to walk the route from Flanders to The Cenotaph. To take part in this National Act of Remembrance by today’s veterans, will be a poignant commemoration. We hope that the public, and in particular the people of Kent, will give their support and encouragement to this event.”

“2018 marks the centenary of the end of the Great War, the aftermath of which saw the creation of so many of the well-known organisations still supporting the veterans community and their families today.

“This centenary of the first Armistice will therefore attract much attention as the nation stops to remember, not just the sacrifices of the Great War, but those who have given so much in all subsequent conflicts. Haig Housing Trust’s The Long Walk Home is a perfect way to commemorate this anniversary and raise awareness of veterans’ housing issues. This poignant pilgrimage joins the memory of events in the British Salient around Ypres during WW1, with Whitehall and the Cenotaph, where our National Remembrance is centred. The walking veterans will meet the challenge and hopefully be supported and encouraged along their route, raising awareness of veterans’ housing issues. I wish them and the Trust every success.”