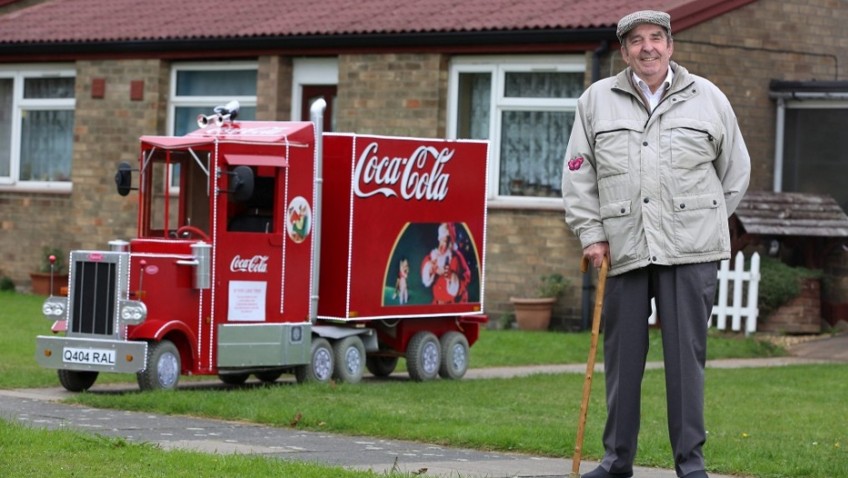 A wacky granddad has managed to raise thousands of pounds for charity by transforming his mobility scooter – into the Christmas Coca-Cola truck.

The ten-wheel miniature imitation comes complete with a picture of Santa holding a bottle of pop on the side and is lined with red-and-white flashing lights.

After creating the truck – which measures 11ft long and 2ft wide -Barrie travelled around Lincolnshire and has so far raised £3,500 for Cancer Research.

It comes a year after the retired taxi driver, who has battled Leukaemia for the last five years, turned his late wife Susan’s mobility scooter into Santa’s sleigh.

Yesterday (Fri) Barrie, who has six grown-up children and 12 grandchildren, said: “Last year I decorated my late wife’s scooter for Christmas, but this time I wanted to do something bigger.

“I don’t think I’ll be able to top this Coca-Cola truck. This is it, as far as I’m concerned. The kids have been raving about it and the response has just been overwhelming.

“It’s been a marvellous reaction. I’ve gone around towns in Lincolnshire most days since the end of October.

“I’ve even had police officers taking photos with me. I feel like a celebrity but I’m just doing something for a good cause.

“When I thought of the idea I never expected to get it off the ground but after I approached Coca-Cola and was given the go-ahead I started asking businesses for their help.

“My grandchildren love the truck and that’s the icing on the cake for me.

“But my daughter has told me to take a break now.

“I want to raise awareness of Leukaemia and raise money for more research into the disease.

“This is just one of the quirky things I do.”

A local mobility scooter shop helped replace the engine for Barrie before he spent £100 on accessories from eBay.

He also relied on donations from businesses to create the mini-replica of the Coca-Cola truck.

Barrie, from Lincoln, has visited a number of local towns including Gainsborough and Heckington and completed his festive tour on Monday.