Home / TRAVEL / Go back in time in Alderney 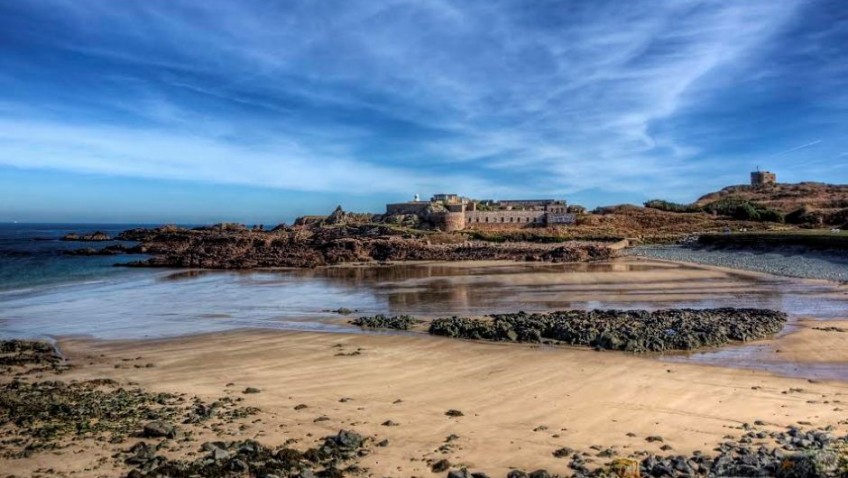 Go back in time in Alderney

Despite its closeness to France and England, Alderney is unaffected by mainstream tourism. There are no high-rise hotels on the shores, just impressive Victorian fortifications, beautiful, unspoilt, clean sandy beaches and safeguarded common land packed with wildlife.

I flew there from Bristol via Guernsey and had wonderful scenic journeys on my way to the Braye Bay Hotel on the south side of the island.

As soon as I arrived I was personally greeted by the Hotel General Manager Richard Proctor, who made me feel very welcome and his enthusiasm was highly contagious. Nothing was too much trouble during the whole of my stay.

The hotel is in one of the most beautiful locations I have ever been; overlooking a very special beach and harbour and their attention to detail is second to none.  I had a stunning view of the bay from my window and fell into sleep lulled by the sound of gentle waves lapping onto the beach – just heaven!

I stayed for three nights in May, but really wished I could have stayed many more, as there is just so much to see and do on this tiny island.

Alderney is a place where people have time for one another, a place where it is quiet and safe and where you can see some fascinating wildlife. The busiest place on the island is Les Etacs, the outcrops of rock on the south west coast where 5000 gannets live and breed!  This impressive sight is a must visit by boat while you are there. Many people choose to live on the island for the peace and quiet, others have a lifelong affection after holidaying here as a child, and some are born here and would never want to leave.

The community is close-knit with people knowing and looking out for one is a world away from the hustle and bustle of daily life.

Alderney is a very unusual place. For those in search of somewhere tranquil, laid-back and with real a touch of the past then it will somewhere you’d love to go.

Despite its closeness to mainland France (8 miles), Guernsey (23 miles), and Jersey (30 miles) Alderney has managed to avoid mainstream tourism. The locals really welcome visitors, which was quite evident when we chatted to residents on the street.

As with the other Channel Islands, Alderney enjoys a mild climate which makes it a popular destination during the spring and autumn, as well as in summer.

Alderney’s landscape is rugged and beautiful. There are large areas of green commonland, long sandy beaches and craggy cliffs with views out towards France and the other Channel Islands.

It is dotted with fortifications with structures ranging from the Nunnery, believed to be one of the best preserved small Roman forts in Britain, to the 13 Victorian forts built to protect the harbour, and the many bunkers erected by the occupying Germans in the Second World War.

Although Alderney is small there are over 50 miles of lanes and country paths which make it an ideal place for walking. Outside town there is little traffic and the speed limit is just 35 mph, making it a very safe and pollution free environment.

The wide expanses of commonland are largely left in their natural untamed state and give the island a wild and unspoilt feel. Walking and cycling are the best ways to see the island, particularly as some of the tracks are a little rough and therefore discourage cars.

Alderney was first inhabited 2000 years before the arrival of the Romans. However the oldest surviving reference to the island is in the Charter of 1042, when William the Conqueror become King in 1066 and Alderney was attached to the English Crown for the first time.

Due to the island’s position in the English Channel it has always been an important strategic position. The many fortifications on the island have been built by various occupying forces over the centuries.

During the reign of Henry VIII war broke out between England and France and work commenced on a strong defensive fortification – Fort Essex – which can still be seen today. In 1793 with the outbreak of the French Revolutionary Wars, and a general feeling of instability, the British government sent 300 men to Alderney and they built Fort Doyle.

Fortification started in earnest in the 1850s when the British Admiralty felt threatened by the strong French naval base at Cherbourg. At this point the Braye breakwater was constructed to create ‘a harbour of refuge and observation’. Ten large forts were also built by an imported labour force, and these impressive structures can still be seen today, placed in strategic positions on the coast. The Germans built these in the 1940s, using Russian and French Jewish slave labour. The aim was to turn the island into one large fortress, with gun emplacements, defensive works, underground shelters and a network of tunnels.

Alderney residents were evacuated at this occupied time but returned at the end of the war to find houses damaged, possessions gone, the breakwater in disrepair and the island itself looking a very different place.

The tides around Alderney are powerful and even in calm seas white horses can be seen off the coast.

The Swinge, a tidal stream out to sea between Alderney and Burhou, is particularly treacherous. A mile or so out to sea, the Swinge is at its fiercest, and in rough weather has been the cause of several wrecks.

One boat that suffered long ago was an English warship from the Elizabethan Age, discovered in 1977 and of great interest to historians as the only known wreck of its kind in the world. Artefacts from the wreck are on display at the Alderney Society Museum.

Perhaps Alderney’s greatest feature is the shear diversity of wildlife packed into such a small space. There is never a season without something to offer nature lovers.

Alderney is better known for its birds than its mammals; however there are several distinctive species which thrive, largely due to the lack of predators. There is not a single fox on the island.

There are plenty of bats, mice and a rabbit, the little-known greater white-toothed shrew is common. Black rabbits and blonde hedgehogs are more unusual viewing, with the famous blonde hedgehogs occasionally observed in the evening, foraging for food in the side-streets of St Anne. The small uninhabited islands of Burhou and Ortac are also places of special importance. Burhou, which is 2 miles northwest of Braye Harbour, is home to threatened colonies of puffins and pestrels as well as black-backed gulls and common seals.

The puffins are best seen between the end of March and early July. Boat trips out to the uninhabited island of Burhou to view the puffins are regularly organised with the Wildlife Trust. During my trip I was lucky enough to have their guide Martin Batt accompany us, who was exceptionally expert and knowledgeable about all aspects of the wildlife on whole of the island.

Migratory birds, as well as birds of prey, are often spotted from the reserve. Longis is the largest reserve and contains 13 distinctly different habitats. The grasslands have a great diversity of plant species, with rarities such as small hare’s-ear, small restharrow, scrambled egg lichen, autumn lady’s tresses, bastard toadflax and green winged orchids. Both reserves, along with the Ramsar site, are looked after by the Wildlife Trust.

Visit Alderney and you will discover an oasis with an ancient and varied history, an abundance of wildlife, beautiful beaches, an enviable lifestyle and experience the unique, contagious phenomenon known as “the Alderney Feeling”, and I certainly took some away with me.

The Braye Beach Hotel does a range of packages 3 night, 5 nights and 7 nights which include return flights from Southampton .