Home / LIFESTYLE / Salford Quays – A trip into the future 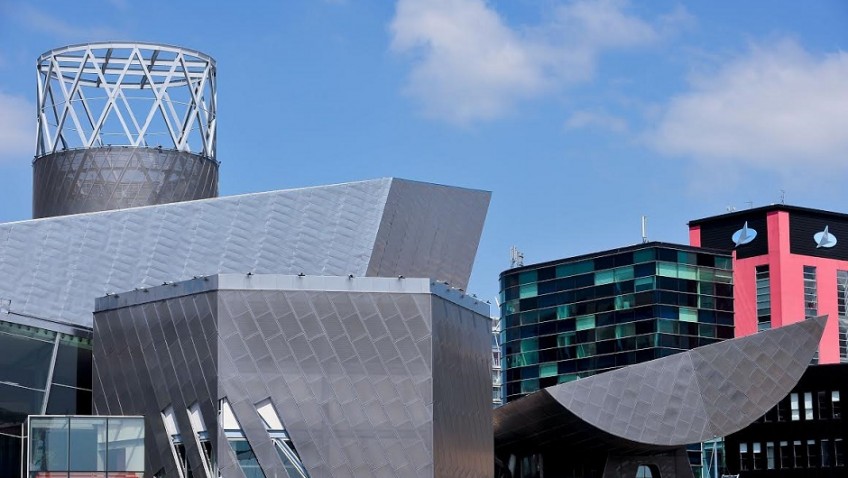 Salford Quays – A trip into the future

Travelling up very busy motorways to what the Prime Minister hopes will become part of his “Northern Powerhouse” scheme, I wondered how many more vehicles can use our already overstretched roads.  With great relief we found our hotel, The Copthorne, which provided us with exactly what was needed.  A comfy bed, good shower and Wi-Fi.  What made the hotel especially memorable was the friendliness of the staff; not only was nothing too much trouble, but they went out of their way to be helpful and engaging. Self portrait by the artist “Lowry”

The main focus of our trip to Salford Quays was to take a Mersey Ferry sailing on the Manchester Ship Canal, but disappointingly, due to mechanical failure, the cruise was cancelled.  This was a journey we had been looking forward to for months, that had been highly recommended: a trip down memory lane for my scouse husband and a whole new experience for me, a southern girl.

But all was not lost, the site is an adventure in itself. From its original purpose, when opened in 1894 by none other than Queen Victoria, the Salford Docks were central to Manchester’s Industrial Revolution success. The Manchester Ship Canal was built as a means of ensuring that ocean-going ships could bring their goods directly into Manchester – and avoid the charges levied by Liverpool’s dock and rail companies.

The docks began to decline in the post-war years and they were bought by Salford City Council in 1984 becoming one of the largest urban regeneration projects in the UK.  Now it is a thriving bustling centre for shopping, eating and culture.

“A Man Looking at Something” by Lowry

With its own link from Manchester the Quays we hopped on the tram to Media City.  The waterfront is home to two of its biggest cultural attractions: Imperial War Museum North (recently re-branded IWM North) and The Lowry, both of which recently clocked up ten highly successful years.

The monumental architecture of each gives a boost to the long, slow regeneration of what were once among the busiest industrial docks in the UK. The arrival of the BBC at MediaCityUK was the big bang that kick-started a flurry of development which continues to this day. It’s a place in the process of reinventing itself, its story is still being written, but all the more interesting for it.

Now with ITV studios also on the waterfront this truly is media city with high-rise apartment buildings going up all around to house the workforce required to service the industry.  The architecture is hyper-futuristic and adds a filmic quality to the area; we walked around gazing at the turrets, towers and bridges.

With two theatres, galleries and a studio space, The Lowry combines the performing and visual arts. It also holds and displays works from the world’s largest collection of work by local lad, L.S. Lowry, although its galleries also have a changing programme of contemporary exhibitions that blur the boundaries between performance and visual art. In addition to award-winning theatre, The Lowry hosts touring popular acts, classical music, dance and is the regional base for Opera North.

Across the water, meanwhile, sits arguably Manchester’s most compelling building, IWM North. The museum’s fragmented design represents a globe shattered by war (inside, it has sloping floors and is completely devoid of right angles), while its interior houses a beautifully-presented permanent collection and series of changing exhibitions which consider the many ways conflict shapes society. An engaging programme of talks and activities make it a popular destination for all ages; the 360-degree Big Picture Show screens films every hour.

We watched one depicting the fate of children affected by war and conflict throughout the last century, and were both moved to tears.  You cannot be in this building and not be horrified by man’s brutality to man: how did we come to this?

Manchester United’s football stadium and the Lancashire County cricket ground at Old Trafford are just a short walk away: we were glad not to be there on busy match day. The Quays have risen from the ashes over the past 20 years.  Regeneration continues into a series of waterfront piazzas, with plans afoot to double in size – making it one of the region’s biggest success stories.

If you remember the old docks and container port, like my husband, you will be amazed at the transformation.  If you were expecting a basic gentrification project, like me, you will be astounded at the beauty and grace of the modern architecture.  There is a buzz about the place and everyone you see smiles.

I imagine that in the future this area will be as lauded as Oxford for its dreaming spires and elegant bridges.  Visit it now and be proud of what can be done in our country.