Home / LIFESTYLE / Remember the delights of the Pleasure Garden? 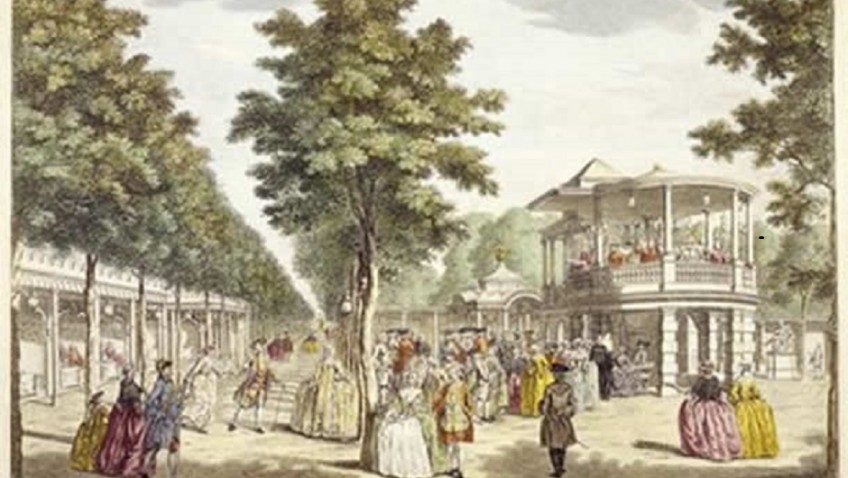 Remember the delights of the Pleasure Garden?

Long before the invention of Disneyland, Georgians enjoyed their own type of amusement park: the pleasure garden. For a modest entry fee, people from all walks of life could escape the noise and squalor of the city streets for a diverting evening of al fresco entertainment, socialising, romance – or even scandal…

They began to appear as England fell in love with fun again at the Restoration, and reached their height in the 1740s and 50s. In the halcyon days of the mid to late 18th century, the gardens were the backdrop to an endless parade of concerts, balls, public breakfasts, masquerades and firework displays.

Pleasure gardens were the great melting pots of eighteenth-century society. London pleasure gardens in particular were phenomenally successful. First opened in 1746, Ranelagh pleasure gardens in Chelsea boasted acres of formal gardens with long sweeping avenues, down which pedestrians strolled together on balmy summer evenings. Other visitors came to admire the Chinese Pavilion or watch the fountain of mirrors and attend musical concerts held in the great 200-foot wide Rotunda. Originally designed to appeal to wealthier tastes, pleasure gardens soon became the haunt of the rich and poor alike, where both aristocrats and tradesmen enjoyed the rural retreat side by side.

The entrance price to Vauxhall gardens was just one shilling throughout the century and therefore remained affordable to most people. 12,000 people arrived at Vauxhall gardens in 1749 to watch Handel rehearse his Fireworks Music. Elsewhere in London, people drank tea and strolled together in smaller private venues, of which there were over 60 by the second half of the century. Most provincial towns also boasted their own pleasure gardens that were often modelled on the most fashionable London attractions. –

Pleasure gardens featured every sort of attraction, from the sedate to the salacious. There were manicured walks and impressive fountain displays, light refreshments, classical concerts, exotic street entertainers and even fireworks. Away from the prying eyes of polite society, they were ideal places for romantic trysts. Their darker corners were also rife with prostitution…

The magical – and somewhat edgy – air of the gardens was largely down to lighting. In the days before electricity, the sight of hundreds of oil lamps illuminating the trees and bushes must have been sensational.

Music was a major attraction of pleasure gardens and most featured an orchestra building where live bands would play popular tunes of the day as well as perform new works by major composers such as Handel and Mozart. In 1769, 12,000 people arrived at Vauxhall to watch Handel rehearse his Fireworks Music.

Others were quick to see the potential and pleasure gardens soon opened around the world; many called ‘Vauxhall’ after the original. Vauxhall was only rivalled in London by Ranelagh pleasure gardens which opened in 1746 on the site of today’s Chelsea Flower Show. To recoup its extravagant £16,000 construction cost (£2.5m in today’s money), it charged a higher entry fee than Vauxhall, in turn attracting a wealthier and fashionable crowd.

For those who worked, holidays really were only single days, and before the railways made travel to the coast or countryside viable, a day at a pleasure garden on the outskirts of the city was the perfect way to unwind. By the Victorian era most pleasure gardens had lost their Arcadian chic. Offering family entertainments, balloon ascents, animal exhibits and ice-cream, they were the forerunners of the seaside or amusement park.

The popularity of pleasure gardens persisted right through to Victorian times. Both private pleasure gardens and commons were largely superseded by public parks from the early Victorian period and many were built over; a few, however, remain as some form of open space.

I have spent many happy hours in the gardens in Bournemouth which lead right down to the sea.

Does your town have Pleasure Gardens?