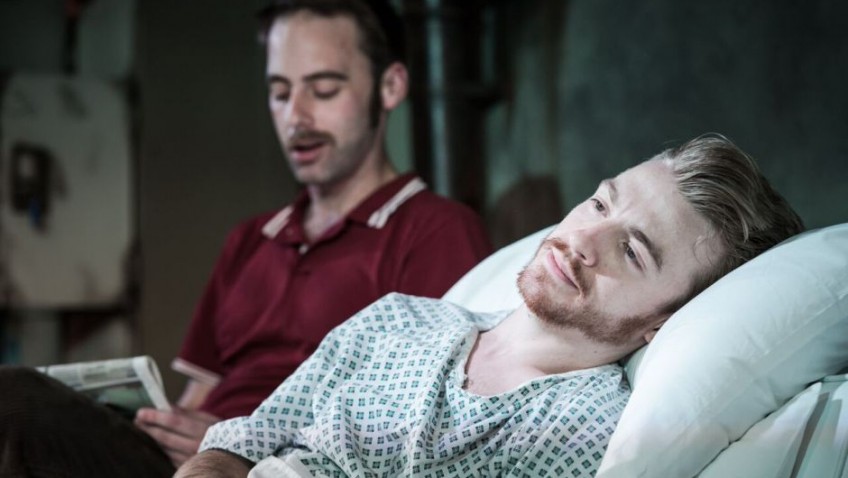 Globally, more than 25 million people have died of AIDS

Robert Tanitch reviews As Is at Trafalgar Studios, London SW1.

William M Hoffman wrote AS IS thirty years ago in response to the AIDS epidemic and it premiered in New York in 1985.

No doubt because of its subject matter it was nominated for Tony and Pulitzer Prizes and won the Obie and Drama Desk Awards.

AS IS was the first AIDS play to be staged in America and it is interesting precisely for that reason. Larry Kramer’s The Normal Heart followed soon after.

Andrew Keates’s production, which was initially seen at the Finborough Theatre in 2013, is now revived to celebrate the play’s 30th anniversary.

Globally, more than 25 million people have died of AIDS.

The rate of new infections is not falling in the UK. It is estimated that one in four people with HIV are unaware of having the virus.

Webb and Poynor inhabit their roles with convincing ease.

Rich’s instant response to having AIDS is “I am going to die and take as many as I can with me.” Later, he tries to persuade Saul to assist him in committing suicide.

Not all the scenes work. One of the better ones is between Rich and his straight brother (Dino Fetscher).

AS IS may be of historic interest to gay audiences. Whether it will have a wider interest has to  be seen. It hasn’t the box-office appeal, for instance, of the recently successful revival of Kevin Elyot’s My Night with Reg