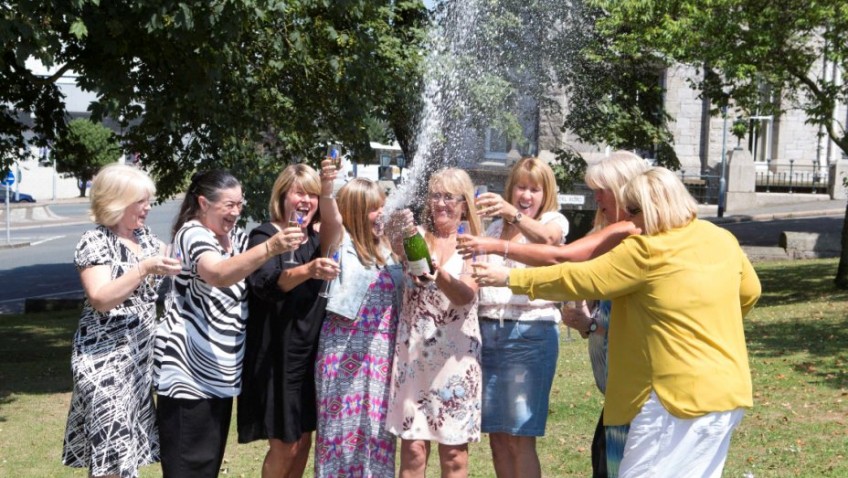 A widow told by a psychic her late husband felt guilty about not leaving her enough money but he had a ‘plan’ won the LOTTERY two weeks later.

Grieving Jackie Beresford, 56, visited the medium to try and contact hubbie David after he died from cancer.

The fortune teller told her she’d spoken to David in the after-life and he had one regret in not leaving her more cash – but he had a ‘plan’.

Days later grandmother Jackie was part of a syndicate of 15 Tesco workers who scooped £3.7million on the National Lottery – winning £245,996 each.

Speaking of her visit to a psychic, Jackie said: ”She told me my husband had one regret, that he had not left me in a better financial situation, but that he had a plan.

“I just know David’s shining down on me and looking after me and this was his way of doing it.

“I had the money to do what I wanted, but for me it was hard because he wasn’t here with me to share it.

“I would have given it all back in a minute if I could have had him back. For me personally it was the worst and the best year of my life.

“It was a struggle to begin with, there were quite a few mixed emotions.”

David, of Plymouth, Devon, visited a psychic in July following the sad death of her husband on Valentine’s Day last year.

Jackie has been able to pay off her mortgage, redecorate the inside of her house and is preparing to treat her family to a holiday in Florida in May.

She said: “My family is ecstatic, a great weight lifted off their heads because I was struggling with how I was going to keep the house, things like that.

“It’s just relief that they don’t have to worry.”

All but one of whom still work at the supermarket, have bought cars and houses.

“Everybody has been quite sensible with it really,” Jackie said. “It was a bit of a shock, you just don’t know how much money it is because you can’t visualise it.

“We talk about it quite a lot, we still can’t believe it.

“It was a lot of stress to start off with, I think once we had got over the initial shock we had a good night out on the town and thoroughly enjoyed ourselves.”