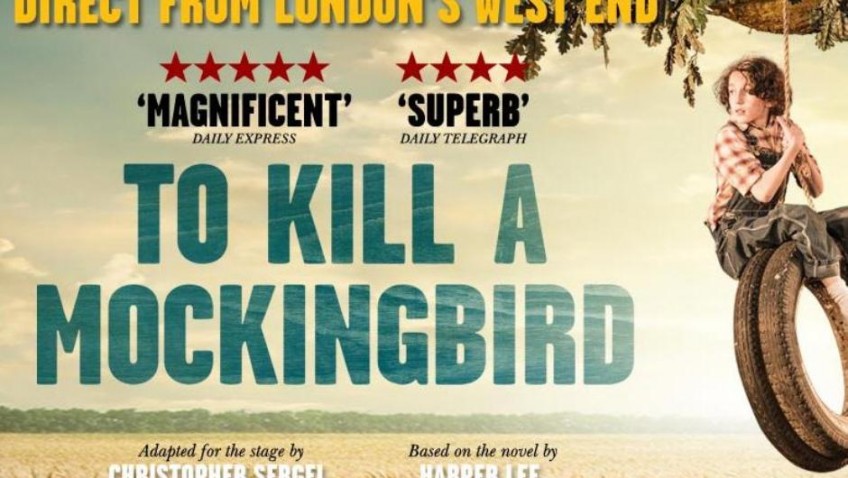 A powerful adaptation of To Kill a Mockingbird

With Gregory Peck as lawyer Atticus Finch, the 1962 film version of To Kill A Mockingbird became one of the most revered, award winning films ever, a perfect adaptation of Harper Lee’s one and only novel. The book, winner of the Pulitzer Prize in 1961, is still a much-loved classic worldwide and a staple of school exam boards, while Christopher Sergal’s stage version has been around since 1990.

Set in a Deep South Alabama backwater in the 1930s, the struggle for human rights and racial equality has hardly begun yet. When black man Tom Robinson is (wrongly) accused of raping a white girl, bigotry, hatred and injustice are inevitably the order of the day. In defending Tom in the face of the town’s brutal lynch-mob mentality, Atticus Finch is almost alone.

The play, like the book, tells this powerful story through the eyes of six-year-old Scout as she and her brother learn about the world and people around them and come to realise their apparently boring father is actually a brave, respected, principled man. Gentle humour runs throughout, engaging the audience, especially in interactions with older brother Jem and young friend Dill (the three children played by three alternating groups of young actors.) The onstage dramatisation is interspersed with narrative passages, read direct from the book’s pages.

Act Two has the greater flow and focus, allowing drama and characters (all with American accents) to gain momentum and develop more fully: Daniel Betts as calm, courageous, determined Atticus; Victoria Bewick as pathetic, impoverished Mayella Ewell with Ryan Pope as her drunken father Bob; Zackary Momoh as the worthy Tom, Jamie Kenna as sturdy Heck Tate, Susan Lawson-Reynolds as Calpurnia and Christopher Ackrill as Boo Radley. Act One, though, provides a fair bit of distraction.

All with different British accents and styles, a dozen or so different actors read out the narrative sections, each from a different edition of the book. While demonstrating the book’s universal popularity, this fails to channel the voice and character of Scout as effectively and coherently as it might in order to maintain a consistent atmosphere. During dramatised scenes, the casually dressed actors sitting or moving onstage with their books also detract from the impact at times, while right at the start the sleepy backwater becomes, bewilderingly, a mass of frenetic movement. Still, Miss Maudie, Mrs Dubose and the Reverend do just about manage to shine through.

Nevertheless, this is a pleasing production of a powerful story that brings home, gently and effectively, that it’s the duty of each of us to imagine ourselves in the shoes of others and to stand up and defend the innocent and powerless at all costs – for it is, indeed, a sin to kill a mockingbird.