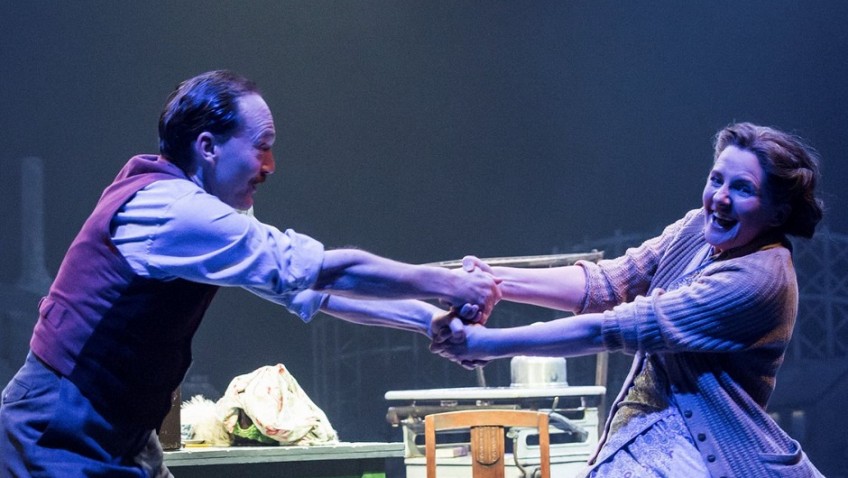 Directing his final, farewell musical for The Crucible after seven impressive years as Artistic Director, Daniel Evans is saying it in grand style with flowers (not to mention with stupendously spectacular frocks!) Standing ovation? Of course.

Adapted from Paul Gallico’s 1958 novella, Flowers for Mrs Harris tells the gentle, heart-warming, improbable tale of penniless, good-hearted charlady Ada Harris who sets her heart – and three years of relentless slog – on owning a Christian Dior dress. Though it’s a musical in that the words are largely set to music, the focus throughout is firmly on the superbly engaging characters and their relationships as they blossom and grow.

Their hard-working lives spring to life courtesy of a revolving stage, set in the swirling grey brickwork. On a conveyor belt of creative continuity and cleverly choreographed action, a busy bustle of clients, flower sellers, snow showers, props galore and (eventually) a magical catwalk of sumptuous Christan Dior creations literally ‘do the rounds’ before our eyes.

Every character is fabulously engaging. Claire Burt and Mark Meadows interact beautifully as Ada and Albert Harris, while Anna-Jane Casey is full of glorious fun and humour as Violet – and later as a bent, fag-smoking French charlady with a broom. For this is a show of two contrasting halves.

From a world of power-cuts and tragic loss, we drop into Parisian extravagance at the House of Dior with its sweeping stairway, glittering chandelier and oh, so breathtaking, so voluminous ‘New Look’ frocks. Delightfully, the cast members are now all French! As they take up parallel roles in Act II, the story becomes more involving, more intriguing. Louis Maskell’s accountant and would-be photographer Bob, is now shy, would-be wooer Andre; Laura Pitt-Pulford’s brat actress Pamela is now Natasha, a famous Dior model who longs to cast off the gorgeous gowns in favour of a simple life full of chocolate cake. Rebecca Caine’s Lady Dant is now brusque yet sensitive Madame Colbert, while Albert is an Albert still, though now a dapper, kindly marquis.

These and other characters are all beautifully endearing, none going into over the top stereotype, while the humour is gentle, and the music, mainly unobtrusive (-apart from some cliched harp and violin), serves to carry dialogue and drama along, a blend Richard Taylor and Rachel Wagstaff worked on carefully together. The words are delivered clearly (sauf, peut-etre, quelques-uns en francais) and all the cast sing well, though there are no big solos or duets where they might shine at their very brightest.

Tears prick as touching stories unfold, and even those who don’t initially buy into Ada’s yearning to possess an extravagant dress she neither needs nor will ever wear are gradually drawn in as the bigger picture emerges. It doesn’t matter what message or metaphor is taken from the piece, if any. Carpe diem, perhaps, and follow your dream; move on and look to the future, perhaps, or don’t go looking for happiness in the wrong places. Maybe the lesson is that all you need is love and a few good friends or that good deeds sometimes pay dividends – or could it just be that a penny in a vase helps flowers stay fresh? With recent worrying declines in bees and an upsurge in Astroturf sales, perhaps the warning that best be heeded is that ‘a life without flowers is no kind of life at all.’

What everyone should take from it, though, is a lasting share of warmth, magic, humour and creative loveliness, while the mind-boggling splendour of such an outrageous array of fabulous frocks and flowers is something never to be forgotten.

Flowers for Mrs Harris runs at The Crucible until June 4th.