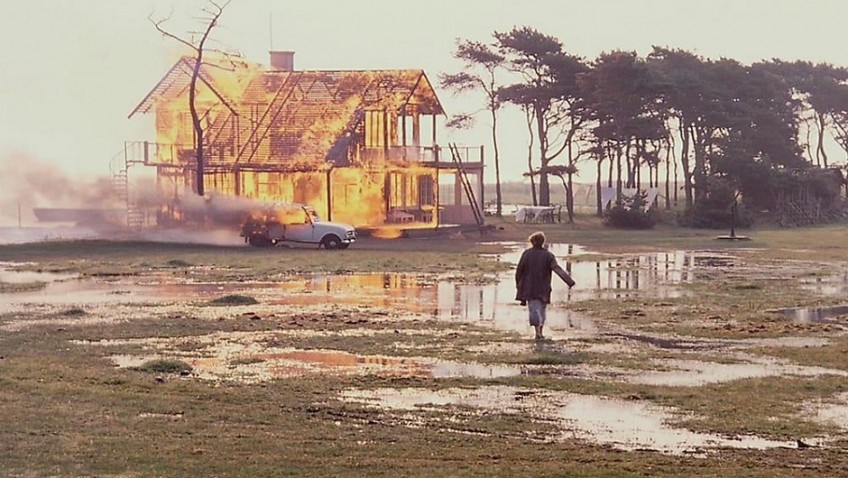 ELECTRA, MY LOVE (Second Run). Hungarian director Miklós Janscó lived and filmed in a Hungary ruled by the Soviets and therefore knew all about the tyranny of repressive regimes and the abuse of tyrants. His film, released in 1974, reinterprets a play based on a familiar classical legend of revenge to make a political comment on his own times.

Here Electra kills the Messenger who reports Orestes is dead. The Messenger is reborn as Orestes and together sister and brother kill Aegistus, who had killed their father, Agamemnon, 15 years previously.

Amazingly, this epic pageant is shot in only 12 takes. The photographer was Janos Kende. 500 extras enacted an elaborate and complex choreographed ritual on a Hungarian plain, an enormous panorama. The cast included the actors in the leading role (dubbed after filming had finished) and a chorus of horsemen, dancers, nudes, dwarves and a herd of galloping horses. They provided a constantly moving background. Inevitably, the play was upstaged by the production, a logistical nightmare and a military operation brilliantly executed.

THE SACRIFICE (Artificial Eye). Russian director Andrei Tarkovsky’s last film, a talky last testament, a spiritual and intellectual exercise, released in 1986, was shot in Sweden when he was dying. He was only 54. The film, which has an Ingmar Bergman feel to it, is dedicated to his son. It is not an easy film to watch and especially if you are not already a Tarkovsky admirer.

Civilisation is built on sin. An actor, who has given up the stage to lecture on aesthetics, is celebrating his birthday when World War 3 breaks out. How would you cope with a nuclear disaster and the end of the world? Remain calm, despair, have hysterics, shoot yourself? He prays to God, promising to give up everything he loves, if he may have a second chance to re-start his life again. He could, of course, wake up and end up in the mad house. Life is a dream. There is no such thing as truth.