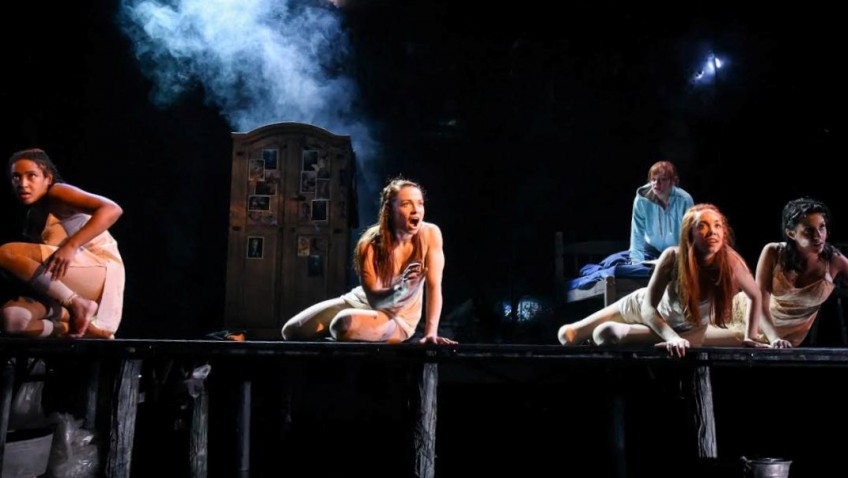 Shared Experience’s famous mix of physical and text has produced some memorable work in the past. I think in particular of Polly Teale’s highly imaginative production of Charlotte Bronte’s Jane Eyre.

It has been adapted many times and not least by Dvorak’s Rusalka in 1901 and Walt Disney’s animated musical in 1989. I would love to see John Neumeier’s 2005 ballet.

Life is full of pain and suffering. A 16-year-old mermaid, you will remember, saves a Prince from drowning and instantly falls in love with him. She trades her voice for a mortal soul.

The Little Mermaid is played by Sarah Twomey who is making her professional stage debut. The body language for the mermaids is by movement director Liz Rankin

Andersen’s story is a timeless feminist tract about how teenage girls go to extreme lengths (dieting, plastic surgery, etc) to gain the love and approval of boys who are not really interested in them.

Andersen’s story does not need any embellishments. It is sufficient in itself. But Teale, instead of sticking to Andersen, introduces, in the disappointing second act, some extended and jarring satire on British royalty playing up to the media (or is it the media playing up to the royals?)

There is too much dialogue and too much padding. The production is stretched well beyond its natural one-act length. The ending is so abrupt as to be ridiculous and certainly not a patch on the tragic ending Andersen wrote before his publisher forced him to add a happy coda.

The production, which is touring and will be visiting Cardiff, Southampton, Edinburgh, Watford and Oxford, could be a useful springboard for discussion by schoolgirls on female role models.