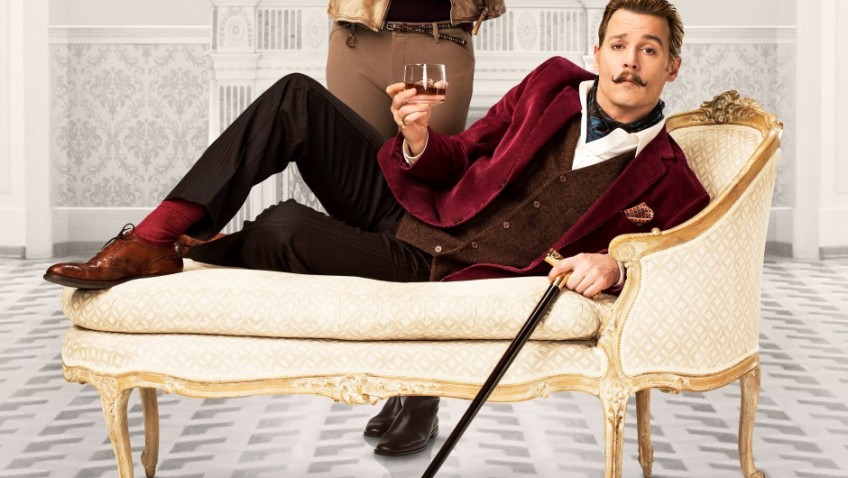 Oh what fun we could have had with an adaptation of Kryil Bonfiglioli’s very British spoof Don’t Point That Thing at Me.

Bonfiglioli’s witty novel is a kind of naughty Jeeves and Wooster comedy which Director David Koep and Writer Eric Aronson have merged with an updated version of the 1934 film, The Thin Man.

The marvellous cast of Johnny Depp as the eponymous middle-aged, decadent and immoral art dealer; Paul Bettany as Jock, his ex-con man servant, body guard and fixer; Ewan McGregor as former school friend Inspector Martland; and Gwyneth Paltrow as Mrs Charlie Mortdecai certainly have the talent to handle this type of comic spoof.

So why is Mortdecai such a disappointment?

Since the books are too improbable and silly to attract fans of crime and action genres, any film adaptation has to rely on the irresistible relationships between the characters; a very funny script and perfect comic direction to make up for the weak plot and overblown characters.

While the cast do their best to maintain the relationships between the four main characters, the comic timing is way off and Aronson’s script feels unbalanced and schizophrenic.

We discern the brilliant one liner (more often than not from the novel) here and there, but they to lift the rest of the script from the doldrums.

In the books, Mordecai’s old fashioned life style runs up against the drabness of 1970s England. There is some of that here, but not nearly enough. Here, too, Mordecai is a self-absorbed, cowardly snob, but with few redeeming qualities to make him appealing. If you blink, you might even miss his intelligence and expertise. The introduction of Mrs Charlie Mordecai raises problems, not the least of which is why his glamorous wife stays with him.  Ladies’ man Jock (well played by the handsome Bettany) shows up Mortdecai in both looks (yes, that’s right!) and sex-appeal.

Depp might not be losing his appeal just yet, but it is certainly taking a leave of absence here. Meanwhile the wonderful chemistry between McGregor and Paltrow has us wishing the two of them would get together, as even in the bath scenes, Paltrow and Depp fail to convince us of a mutual attraction.

It seems that the filmmakers intended to involve Mrs Mordecai in the sleuthing, à la Thin Man. Paltrow goes off sleuthing on her own with impressive results.

That the two never become Nick and Nora Charles (so well played by William Powell and Myrna Loy) is a huge disappointment, not to mention a bit of a puzzle.  Why involve a talented, highly paid actress if the film, like the book, is going to focus on the slapstick relationship between Mordecai and Jock, master and servant?

The great actor Jeff Goldblum is wasted in a minor supporting role as the ‘bad guy’, an American art dealer named Milton Krampf.  Goldblum, like everyone in the cast, is capable of comedy. Alas, though, not even Sherlock Holmes could solve this mystery of the missing laughs.