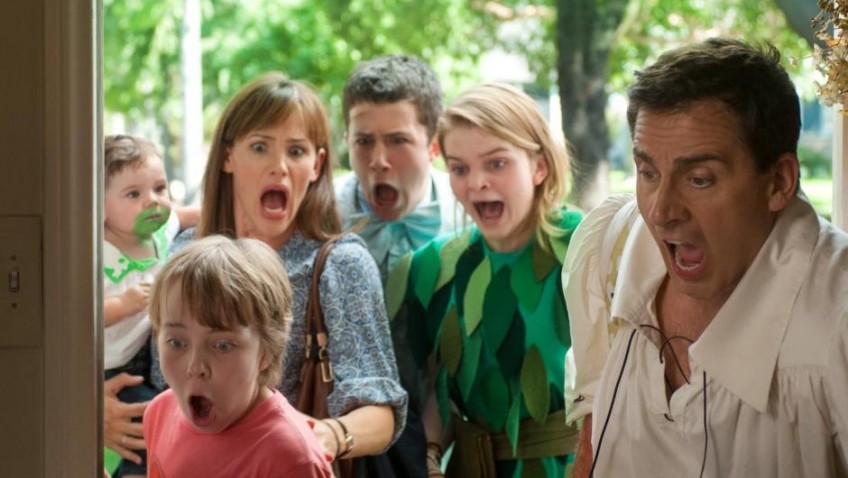 Alexander and the Terrible, Horrible, No Good, Very Bad Day, based on Judith Viorst’s book, needed the right director to bring out its big heart and screwball comedy while minimising the sentimentality and silliness inherent in Rob Lieber’s script.

Michael Arteta, who directed Chuck & Buck and Cedar Rapids, is the right director.   And he has assembled a talented, likeable ensemble cast who never take themselves too seriously or pause for a breath.

You could say that Ben (Steve Carell) and Kelly (Jennifer Garner) Cooper could probably manage quite well if they had done the planet a favour and had two – replacement level – children.  When Ben loses his high-powered aerospace job and Kelly has to take on more responsibility at her publishing firm, three teenagers and an infant son prove to be a challenge.

For the most part, the film is told from Alexander’s Ed Oxenbould) point of view.  He’s 11 and in love with his studious, pretty (and taller) classmate, Becky (Sidney Fullmer).  When the film begins, Alex is having a horrible day.

A series of photos with Alex’s head posted on girlie bodies goes viral and on the eve of his 12th birthday party, he discovers that all his classmates, including Becky and his best friend (Mekai Curtis), are going to a rival’s party.

At home his parents and older brother Anthony (Dylan Moran) and budding actress/singer Emily (Kerris Dorsey) are too preoccupied with their own lives to pay much attention to Alex’s bad day.  Then, on the following day, as the tide turns for Alex, the curse descends on everyone else.

Dad oversleeps on the day of his first job interview in seven months and Kelly nearly loses her job when a children’s book to be read by Dick Van Dyke has ‘dump’ instead of ‘jump’ in almost every line.

Emily has a bad cold on the opening night of her starring role in Peter Pan and gets high on cough syrup.  Anthony has promised is snobby girlfriend (Bella Thorne) that he would drive her to the prom, but he fails his driver’s test.  But for Alex, things are looking up and the whole school will be coming to his party…

What is refreshing about Alexander and the Terrible, Horrible, No Good, Very Bad Day is the absence of sentimentality, even when, rather implausibly and questionably, each family member suddenly decides to put family first and instantly, everything sorts itself out.

Arteta taps into the embarrassments, awkward moments and professional and social nightmares that beset us all and reassures us that we are not alone. Those who cannot remember turning 12 and worrying about who will show up at their birthday party might identify with fifty-something Ben when he walks into his job interview only to find an office full of kids young enough to be his children.

While there are enough laughs and slap-stick to help the slight running time speed by, Alexander and the Terrible, Horrible, No Good, Very Bad Day is not a classic family comedy.

There are a few scenes that fall flat and Arteta misses the chance to turn the driving instructor into a really memorable villain (aren’t they all?)  Still, the film has enough zany fun to make it perfect entertainment for the whole family to enjoy together.