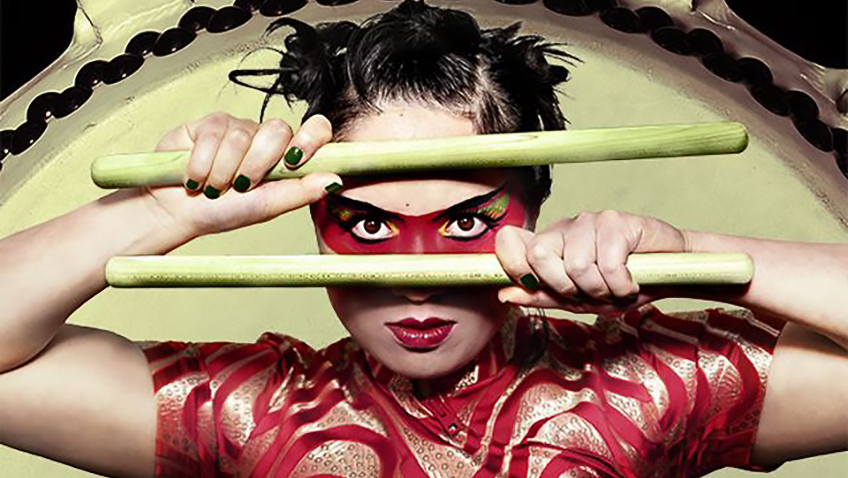 Few things thrill and exhilarate more than the irresistible, body-shuddering crescendo of thundering drums. That’s all the more true when a stageful of barrel-shaped Japanese taiko drums, some of monstrous proportions, are pounding out exciting interweaves of thundering rhythms thanks to the seemingly impossible power and stamina of arm muscles that would make even Popeye’s eyes pop.
The Mugenkyo Taiko Drummers, Europe’s only professional taiko ensemble, is a phenomenon founded in 1994 by Neil Mackie and Miyuki Williams. With the ritualistic elegance, focus, discipline, precision and energy of traditional Japanese taiko drumming still at the root of the performance, far-ranging, modern elements of theatrical drama and showmanship are brought to the mix in the form of stunning choreography, lighting, atmospheric mists, warm, textured backdrop and a variety of pleasing costumes and special effects.

As arms, drumsticks and bodies whirl and criss-cross, players dance in synchronised stances from drum to drum without missing a beat of full-on pounding, leaving not a single spectator left unimpressed or unmoved. Special wows arise as creative lighting illuminates players drumming on a central cauldron-shaped drum with drumsticks that trail streamers; as the playing reaches a frenzy, the illuminated streamers appear as flames leaping from a cauldron. In another scenario, faces luminous with war-paint, the players wield light-sabre drumsticks and swirl arcs of dancing blue light through the air like Harry Potter and Gandalf combined. Sounds come from other instruments, too, from shimmering gongs and the sweet delicacy of Buddhist bells and cymbals to the pitty-pat of drums as flat as pancakes, held by handles like frying-pans, and Markus Guhe’s breathy sounds on the shinobue Japanese flute in Yamagoe, The Voice of the Mountain.

Differing from previous shows, the first act of Tribe follows its special theme before the second assumes a more usual vein. First envisaged on tour in the Lebanon, the theme is that all humanity belongs to one and the same tribe and should all act together as one instead of being divided by wars and conflict. Ethereal spirits and drumming heartbeats are followed by a megaphone diatribe attacking and challenging the world’s values before voices come together to sing in triumph of one world, one tribe. It must be said the audience showed a definite preference for act two, not as entranced by diatribe and wailing song as might have been hoped, perhaps. Overall the show does lack the wonderful, flowing continuity and pristine, hypnotic performance of previous teams, but it’s still filled with breathtaking commitment and energy and brings scintillating wow factor moments that have people on their feet, applauding in delight and admiration.