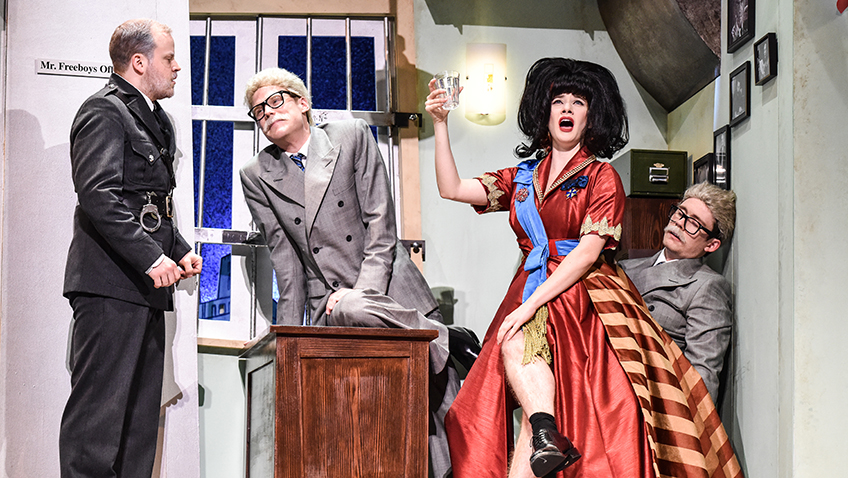 Laughter, we all know, is good medicine, but certain members of the audience do titter close to overdose once The Comedy About a Bank Robbery gets underway.

Full of fabulous farcing about, the show is a veritable masterclass in comic timing, both verbal and physical. Like polished Abbotts and Costellos the actors whirl wordy patter along on dizzy roundabouts of rapid puns, wordplays and misunderstandings, setting our heads spinning; like Lee Evans they astound with hilarious, agile, physical caperings that reach, quite literally, gravity-defying heights. Their skillful mastery of extreme slapstick rivals even Rik and Eddie’s Bottom: one particularly prolonged head-pummeling routine is so remarkable it’s a wonder to behold.

While the fast and furious school-kid silliness of the bank robbery plot keeps laughs and groans coming, elements of romance get a look in, too, and the characters, no matter how ridiculous in appearance and/or conception, are given enough depth to make them real and engaging. Further uplift comes from the whole cast’s harmonious bursts of bouncing 1950’s-style song, along with great solos from the likes of Jon Trenchard, fabulous as the unfortunate, loveable Warren Slax, and Ashley Tucker as good, loud, full-skirted 1950’s American female, Ruth Monaghan. Julia Frith makes her professional debut as lively, resourceful Caprice, daughter of banker Robin Freeboys, putting in a strong, lively, praiseworthy performance, as indeed do all the cast, whose every interaction is honed to perfection – well, near enough! 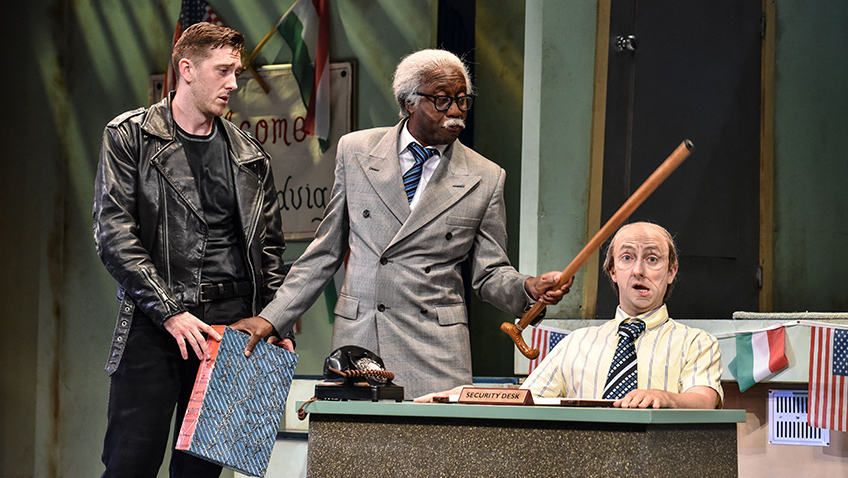 Top quality wit and comedy is complemented perfectly by inventive manipulations of a whole host of glorious props and a very clever set. Beyond the beautifully lit, heavenly skyscraper skyline of Minneapolis sits a world of amazing fold-up sets, fully-fitted with doors, steps and windows a-plenty to be farcical with, and with fold-up beds and cupboards for fold-up people. In escalating frenzies of comings and goings, of dressings-up and dressings-down, deceptions, murders, mistaken identities and vehicular madness, screeching seagulls-on-sticks fly in, turning out to be not just savages but also saviours, while a 1950’s meaning is given to the term “mobile” phone. Most breathtaking of all are the enthralling aerial antics of these slick farceurs par excellence that are both up the wall and right off the wall.

It takes infinite talent, patience and dedicated practice to get everything precisely right when you’re making it look like everything’s going wrong. Multi-ward-winning Mischief company, founded by LAMDA students in 2008, have all that. They’re nothing short of truly farcical.